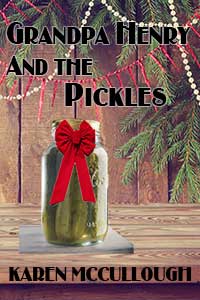 (This story was written for a Wattpad challenge. It had to be a story of no more than 1,000 words, set in the holidays and featuring a jar of pickles, and the phrase, “And where’s the hammock?” This was my entry.)

Mama continued rolling out the lump of pie crust dough into a flat circle. “What’s he done now?”

“He stole a case of Mrs. McCluster’s homemade pickles. You know, those sweet ones that he likes so much,” I said.

“He did what? Danny, are you sure?” The rolling pin paused

“Mrs. McCluster saw him take it. He just walked in and took a case right out of her pantry. She knows Grandpa’s not entirely right in the head so she didn’t want to say anything to him directly. She was gonna talk to you, but she saw me and told me to tell you about it. She was planning to sell them at the store for some extra money.”

“In his hammock, eating pickles,” I said. “Almost through the first jar.”

“Go tell him pie will be ready in an hour. If he wants some when it comes out of the oven, he’d better take what’s left of those pickles back to Mrs. McCluster.” The smell of apples simmering on the stove made me salivate. I hoped it was making Grandpa want that pie just as much.

Jeffy followed me to the enclosed porch that was now Grandpa’s domain. The heater in the corner kept it warm even in December. Grandpa looked up from the padded hammock that he preferred to his bed. Said it was easier on his back. I relayed Mama’s words to him.

He slurped down the rest of the pickle he held before he answered. “Don’t need no pie if I got pickles and my hammock.” He pulled another one out of the open jar. “Go tell your Mama to keep her pie and I’ll keep my pickles.”

Jeffy and I went back to the kitchen and relayed what Grandpa Henry said. Mama chewed on her lip while she poured the filling into the pie crust. Finally she nodded. “Go tell him no more pickles after this jar and he can have pie. You boys keep him from opening another jar if you want pie yourselves.”

He set down an empty jar and looked at the case beside him, then gave us a sidewise glance. “Don’t reckon your Mama will know if I have just a couple more.”

“Nuh uh,” Jeffy said. “We won’t get no pie if we let you eat anymore and you won’t neither. ’Sides it’ll ruin Christmas if you get arrested again like last year. Right, Danny?”

Grandpa rolled his eyes. “Heck, that weren’t nothing but a little disagreement over some cookies in the bakery.”

“You stole a whole bag of them. That’s what Daddy said. He was mad when he had to go get you out of jail on Christmas Eve.”

“I woulda bought them but that girl wasn’t paying me no mind.” He looked at the pickles again. “Judy McCluster always gives me a jar of her pickles for Christmas anyway. I just saved her the trouble of wrapping them.”

“She knows how much I like them. She was gonna give me more this year anyway.”

“Yeah, like you knew that for sure,” I said. “She was gonna sell them.”

Grandpa shrugged. “Sure you won’t join me?” He reached for another jar.

Jeffy slid the carton out of his reach. “No more.”

“Tell us what Christmas was like when you were a kid,” I said, hoping to distract him. Grandpa liked to tell long stories about how things were back in the old days. He launched into a long story about going out in the woods to find a Christmas tree, getting lost, being attacked by a crazy squirrel, and finally making his way back to civilization hours later, messed up, but dragging a tree.

Finally, Ma called, “Pie’s ready. Come get it. You too, Papa Henry.”

Jeffy and I helped Grandpa roll out of the hammock, and then we scrambled for the kitchen where Mama had set out three plates bearing slices of pie. She disappeared for a few minutes while we scarfed down those wedges like we’d never eat again. Mama made the best pies in the world. I would’ve liked more, but the rest had disappeared, probably hidden somewhere so there’d be some left for Daddy when he got home.

Once we finished, Jeffy and I went to watch TV while Grandpa slouched back to his porch. The set had barely warmed up when we heard him yell. “And where’s the hammock?”

“Huh?” Jeffy and I were curious enough to go check out Grandpa’s quarters. Sure enough, his hammock was missing.

Mama came in behind us. “I’ve got it,” she said. “You want it back, you go return that case of pickles to Mrs. McCluster.”

Grandpa Henry’s eyes went wide. “You shifty woman, you. I get another piece of pie and the hammock back after I take back the pickles.”

“Danny, you go with him and make sure he takes them back. Tell Mrs. McCluster we’ll pay for the jar he ate.” She looked at Grandpa Henry with narrowed eyes. “And make sure he leaves them all there.”

So we went down the road to Mrs. McCluster’s place. She was thrilled to get the pickles back and refused when I told her about paying for the one jar. Instead she handed each of us a jar from the case and said, “Merry Christmas.”

Grandpa Henry eyed mine and said, “You tell your Ma she gave us these. Trade you that jar for my extra piece of pie.”