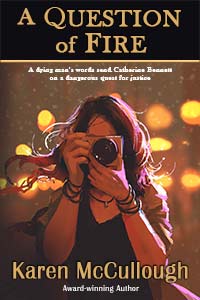 When Cathy Bennett agrees to attend an important party as a favor for her boss, she knows she won’t enjoy it. But she doesn’t expect to end up holding a dying man in her arms and becoming the recipient of his last message. Bobby Stark has evidence that will prove his younger brother has been framed for arson and murder. He wants that evidence to get to his brother’s lawyer, and he tries to tell Cathy where he’s hidden it. But he dies before he can give her more than a cryptic piece of the location.

The man who killed Bobby saw him talking to her and assumes she knows where the evidence is hidden. He wants it back and he’ll do whatever it takes to get it, including following her and trying to kidnap her.

Cathy enlists the aid of attorney Peter Lowell and Danny Stark, Bobby’s prickly, difficult younger brother, as well as a handsome private detective to help her find the evidence before the killers do.