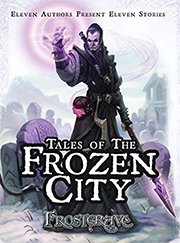 My story in the Anthology is titled “Best Served Cold.”

Long ago, the great city of Felstad sat at the centre of a magical empire. Its towering spires, labyrinthine catacombs and immense libraries were the wonder of the age, and potions, scrolls and mystical items of all descriptions poured from its workshops. Then, one cataclysmic night, a mistake was made. In some lofty tower or dark chamber, a foolish wizard unleashed a magic too powerful to control. A storm rose up, an epic blizzard that swallowed the city whole, burying it deep and leaving the empire as nothing more than a vast, frozen wasteland. The empire shattered, and the magic of the world faded. As the centuries came and went, Felstad passed from history to legend and on into myth. Only a few wizards, clinging to the last remnants of magical knowledge, still believed that the lost city had ever actually existed. But their faith was rewarded. After a thousand years, the fell winter has passed. The snows have receded, and Felstad has been uncovered. Its buildings lie in ruins, overrun by undead creatures and magical constructs, the legacy of the empire’s experiments. It is an evil, dangerous place. To the few hardy souls who inhabit the nearby villages, the city has acquired a new name, ‘Frostgrave’, and it is shunned by all right-thinking people. For those who seek power and riches, however, it is an unparalleled opportunity, a deadly maze concealing secrets of knowledge long forgotten…This new fiction anthology collects ten stories of wizards and adventures as they venture into the ruins of the Frozen City.

“With all due respect, ma’am, my company isn’t going any further.” The captain’s voice cracked and his lips trembled as he faced her. He stood stiffly, as though he expected her to call down lightning to fry him for his boldness.

Yglenia stared out over the ruins ahead, where Frostgrave loomed even grimmer in the late summer dawn than its reputation had predicted. Steep spikes of rock towered over ridges of stones. Rows of windowless, roofless buildings lined streets littered with remains of walls and chimneys. Snow mounded in corners and icicles dripped off edges. A low greenish fog wafted in ribbons across that bleak landscape.

“I paid you a hundred gold crowns to come with me to Frostgrave.” Yglenia kept her tone even and resisted the urge to loose a fireball. Anger rumbled in her gut, trying to break free—an unexpected rage she struggled to control.

“To Frostgrave,” the captain said. “Not into it. And we’re here.” The hand that rested on his sword shook. She gave him points for guts. He knew the risk he took in defying a wizard of her power. The crow on her shoulder screeched. She tightened her grip on her staff, fighting the mad fury racing through her.

Ignoring the crow, she gave the captain a hard look, then glanced at the small band of warriors behind him, two men and two women. All had the stance and build of seasoned soldiers, but their mutinous expressions failed to hide their fear.

Birasel—heavens blast her treacherous black soul—had once said a single willing sword at your side was worth more than a dozen slaves.

Yglenia turned to face the small band, and more than one set of knees wobbled. “I’ll compel none of you, but there’s an additional ten crowns each for any who will accompany me.” Expressions turned from mutinous to considering. “And a tenth share of any treasure we find. I feel sure we’ll find something to make it worth your effort.”

To avoid undermining their captain, she added, to him, “Double share for you if you’ll stay with me.”

The soldiers looked at each other and muttered until finally one nodded. The rest followed suit. Even the captain conceded.

“You know where to find this wizard you’re seeking?” the captain asked her as they walked toward the city.

“Not where, but how.” Yglenia drew a long breath to calm herself. Even thinking about Birasel made her blood burn. “I’ll find her.”

For a moment she stared straight ahead. “Only one of us comes back out. I plan for it to be me.”