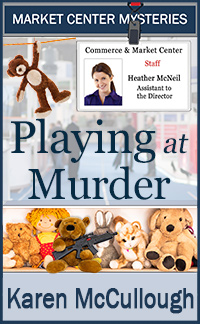 When murder crashes the Games and Playthings Exhibition, someone’s not toying around.

Dolls, constructions sets, stuffed animals, craft kits, and more are the featured displays in the annual Games and Playthings Trade Show at the Washington D.C. Commerce and Market Center, where vendors seek to convince retail buyers to stock their products. Murder and destruction aren’t supposed to be on the program.

Armies of super-heroes stood guard to the left of me, while lions, tigers, and bears gathered on the right. They all watched with silent concern as I zigged around an arsenal of armaments fueled by hydrogen dioxide and various mixtures of oxygen, nitrogen, and carbon dioxide. I faced my goal, Dougal the Dragon, head-on and stalked toward him. In my arms I cradled the all-important emergency medical supplies for his injured representative at this gathering. Heaven help us all if he couldn’t be saved.

Ding dong. That was a bit of wild fantasy, but I enjoyed letting my imagination loose on this mission. The touch of whimsy provided some diversion from the noise and chaos of setting up the Games and Playthings Exhibition at the Washington D.C. Commerce and Market Center. G&P, which was due to start the next day, was one of the largest trade shows for toys and games in the industry, and it brought the usual supply of problems and conflicts inherent in large events.

I tried to avoid being on the show floor as much as possible on set-up days. The constant banging of hammers, clanging of metal on metal, buzzing of electric screwdrivers, squeaking of dolly and cartwheels, warning chirps of the forklifts, and people shouting always induced a headache if I had to spend much time there. Not to mention having to pick my way around the pallets, crates, and boxes stacked everywhere and dodging those squeaking dollies and chirping forklifts.

I still ended up spending more time on the floor than I would’ve liked. Territorial disputes and arguments over arrangements broke out with sadly human regularity, and a large part of my job involved keeping the peace. Trying to, anyway.

This assignment was different. I let go of the fantasy illusion as I got to the Donneywell Enterprises booth, identified myself, and explained my mission.

“Heather McNeil,” I said to the person behind the only table set up in the booth space. “Assistant to the director of the Market Center. I was told you needed a sewing kit to repair one of your displays.” I set the box down on the table where a young woman with long brown hair scraped back from her face and tied in a messy braid at the back looked up from collating and stapling pages.

She stared at me with a blank expression, glanced down at my badge, but said nothing. Her expression went from vacant to wary.

“Can I speak to the person in charge of the booth?” I asked when the silence stretched out too long.

A voice spoke from the back. “That would be me.”

A woman in her late forties or early fifties stepped out from behind a pyramid of boxes at least a foot taller than she was. My first, none-too-kind impression of her was “overcooked.” Her blonde hair had the straw-like texture resulting from too much chemical treatment for too long a time, and the spray-tanned skin of her face had been lifted once too often already. Tight jeans and a fashionably shoulder-slit top showed off a slim figure that seemed to vibrate with contained energy. Good bones under the tight skin and lively green eyes made her attractive.

“Lorene Donneywell,” she said, holding out a hand. “I heard you say you were with the Market Center staff.” She had a strong New York accent.

“I’m the assistant to the director,” I repeated. “I handle a lot of trouble-shooting issues for her. I’ve brought the sewing supplies you requested.”

“Great. How long do you think it will take you?”

“Fix the tear in Dougal.” She pointed to the eight-foot-tall display dragon I’d used to identify their booth. The creature, which must’ve been as long as it was tall, occupied nearly a third of their allotted double space. Along the side of his back, a seam had opened and leaked stuffing. Bits of cotton fluff clung to the green, plush fabric.

I hesitated, taken aback. “You requested a sewing kit, not a seamstress. I’m afraid I don’t know the first thing about sewing. Not even sure how the thread gets through the needle.”

Lorene rolled her eyes. “Why did they send you, then?”

“Because you asked for sewing equipment in a hurry. We got it as quickly as we could. We assumed you had someone on your staff who knew how to use it.”

The woman’s penciled-in eyebrows rose. “We all know what happens when you assume things.”

I kept my smile in place, despite the irritation roiling inside. I had so much experience keeping my emotions under control, I could maintain a pleasant façade with barely a thought. “Misunderstandings happen when people aren’t specific about what they need. Give me a minute and I’ll see if I can find someone to come and make the repairs.” I pulled out my phone but before I could press the button to turn it on, the girl I’d first met piped up.

We both turned toward her, but Lorene spoke first. “Why didn’t you say something sooner?”

The girl frowned at both of us. “No one asked.”