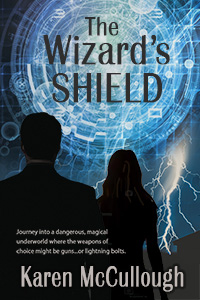 To solve a murder and retrieve a stolen magical shield, a pair of wizards journey into a dangerous, magical underworld, where the weapons of choice might be guns… or lightning bolts.

A powerful wizard with a physics degree and a checkered past invents a shield to ensure he’ll never again be tortured almost to death.

The wizarding powers-that-be fear the repercussions of such a device and send his former girlfriend, an accomplished wizard herself, to retrieve the device or destroy it.

When the shield is stolen by the magical mafia, Ilene McConnell and Michael Morgan have to set aside their differences and work together to recover it. Michael claims he needs the device as insurance against the kind of injury and injustice he suffered once before. Ilene maintains its potential to upset the delicate balance of power makes it too dangerous and that it needs to be destroyed. But none of that will matter if they can’t retrieve it before a ruthless, powerful wizard learns how to use it for his own ends.

“I truly enjoyed this book. The characters are wonderful. Michael is the all-around good guy, gone bad, but on his way back around and Ilene is the broken-hearted girl trying to make it on her own despite never getting over her lost love. They are great as individual characters, but fantastic together.
The storyline is original and well done. The descriptions are vivid and I love the new twist on magic. The science behind the magic is great. The plot is clever and creative. The book is well written and nicely paced.
There is a load of emotion coursing through the entire story. We get love and anger, betrayal and mistrust, all mixed together with desire, longing, magic, and of course shifting balance – – on so many levels!”
~ Beverly at The Wormhole
Full Review

“If you like romance blended with science facts and fantasy, you’ve hit the mother lode. Wizards Michael and Ilene battle a powerful evil wizard using air, fire, water, and earth as weapons throughout the story. The close proximity and united front brought on by their partnership is complicated by unresolved feelings from their youth.