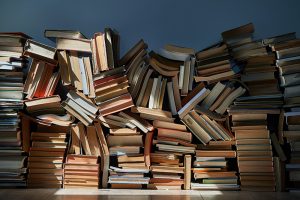 In a previous blog post, I talked about trying to get rid of as much of the “stuff” I have cluttering my home as I can. Some of it’s relatively easy to sort through and dispose of.

When my grandchildren were babies, I bought a fair amount of equipment for them for when they visited. Now that they’re older, I’ve already eliminated a lot of it, donating things to women’s shelters and groups helping resettle refugees.

I’ve gone through several boxes of old photos in the process of scanning them, and those will get tossed once I’m done with the project. A couple of boxes of financial records dating from well before the three-year period we supposedly need to keep have been shredded. I’m still trying to figure out what to do with the boxes of stamp albums and loose stamps I inherited from several older family members.

I always have the most trouble parting with books. I love books and I tend to hang on to all of the ones I’ve enjoyed, found useful, or learned from over the years. Once the kids grew up and flew the coop, I turned the two upstairs rooms into my own makeshift library. Now, as I get older, I realize a time is coming when we’ll be moving out of this house we’ve lived in for 30+ years and I won’t be able to take it all with me.

Many—most—of the books have to go. It’s painful letting go of them. So I’ve developed a technique for deciding what to keep and what not to keep. I gather up a batch of books and bring them to my office, where they get sorted into three stacks. The criteria is asking each book: Will I ever read you again?

Books where the answer is a clear no go in one stack. A few I’ll want to dip into it again before I decide. And even fewer I can glance at and know that this book is a keeper.

As I’m getting older and my life reading time gets more and more constrained, though, I’m finding it easier to say that I’m never going to read this book again. I read it once, and that was good, but enough.

I don’t actually re-read all that many books because there are always so many new ones teasing me. At this point, I’ve eliminated almost half of the library and I still have work to do. I don’t have an actual goal except to get rid of all the books I know I’ll never read again.

Someday I may have to deal with all those books sitting on my Kindle that I’ve read or are waiting to be read. But that’s a problem for another time.