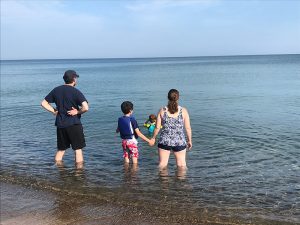 n a hot, summer day a trip to the beach makes a perfect outing. Fortunately, South Bend has several within easy driving distance at Indiana Dunes State Park. The park sits at the very southern tip of Lake Michigan and offers a couple of large beach areas and several smaller sandy coves open to the public. 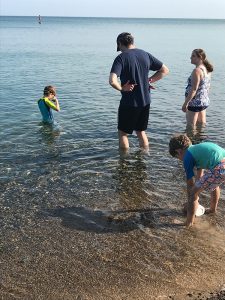 We opted for one of the smaller beach areas and an early arrival to beat the crowds. As it happened, there weren’t a lot of crowds to beat. Despite near-perfect weather, by noon our small area had maybe ten family groups or couples sharing the space, but there was still plenty of room to let everyone spread out and remain well distanced.

We discovered one reason this particular spot was less popular than other areas – the surface in the shallow part of the water was very rocky, once you got a few feet in. The stones made for very unstable (not to mention unpleasant) footing as you stood on them. 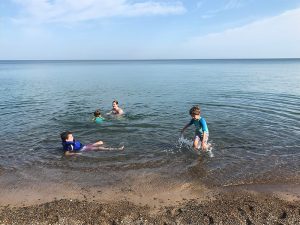 On the other hand, the lake water was crystal clear. Even several feet in, you could still see the bottom, and a number of fish, I’m told. I didn’t make it out that far. The unstable rocks kept me close to the edge on the sandier parts. Plus, the water was cold. For someone used to the coastal beaches of the Carolinas, where in summer the water tends to be quite warm, the chill of the lake was a shock. 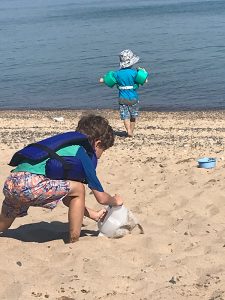 Even so, the boys had a wonderful time in it. The calm lake water made them more comfortable than the ocean waves, which are rough by their standards even on fairly quiet days. Other than those generated by passing boats, there was barely a ripple at the shore. The boys splashed and floated and played in the water for a long time. 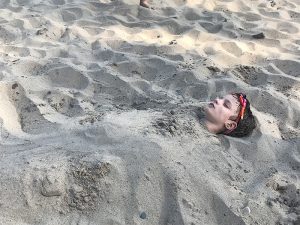 And of course, the sand offered other joys. L. insisted I bury him up to his neck in it. He played dead and then suddenly rose up out of his gritty tomb. Several excavation projects were embarked on, including one mighty hole so deep the surface was at waist level when C. stood in it. H made the bottom of the dune at the back of the beach into an impromptu slide. 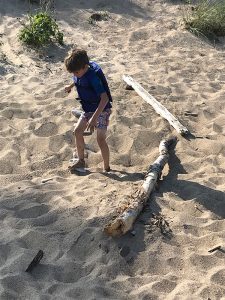 Their grandparents mostly sat in the shade of the dune or the beach umbrella and watched, enjoying the pleasant day, beautiful vistas, and the family fun. 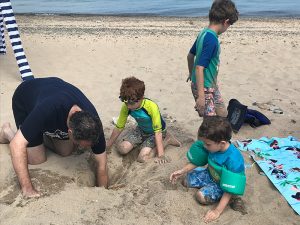