(This story is best read from the beginning. Go here to read part one if you haven’t already) 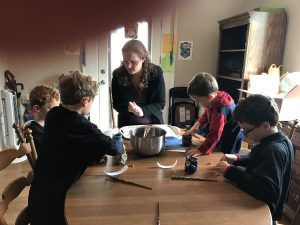 Next class would be Herbology. Professor Snickerdoodle instructed the students in general on caring for plants, then provided each one with a pot, some dirt, and a magic seed. Owl-shaped pots were used to add extra protection for the sprouting plants.

The students planted the magic seed in the dirt, tapped the pots with their wands to promote quick growth, and the pots were put aside to allow the plants to sprout while they went on to the next class: Potions.

In Potions (Professor Snickerdoodle’s last class of the day) the students would be mixing elements to make a potion that magically changed color. Each student had a clear cup and poured liquid from several special bottles into it. The liquid stayed clear until the students tapped their cups with their magic wands and added the special magic white powder. And once they did that, the liquid in the cups turned blue!* 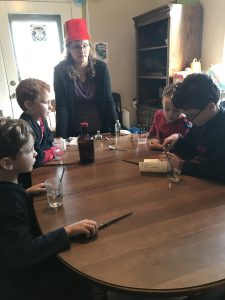 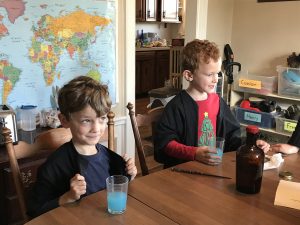 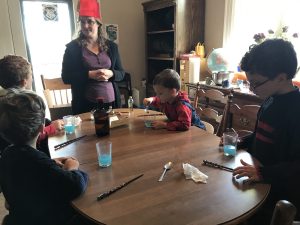 That class was followed by Runes, taught by Professor Fimgrubel (aka Dad). He’d actually created a code based on runic scripts and translated a quote into it. He then challenged the boys to decipher it. The boys, and Liam in particular, love this sort of thing and dove right in. They continued to wrestle with it even after class ended. 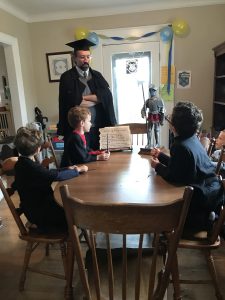 The final event of the day was Quidditch practice. They concentrated on catching the golden snitch. Professor Fimgrubel stood on the back deck and tossed practice snitches for the boys to catch. The truth is most landed on the ground, causing a short scrum for possession of each. It was the three-year-old, the youngest, who discovered that the golden covering of the snitch could be unwrapped to reveal an edible and rather delicious, chocolatey center!**

Next post: The great discover and the post-class birthday celebrations!

* The secret here is blue Kool-Aid powder. The powder itself is white until mixed with water. 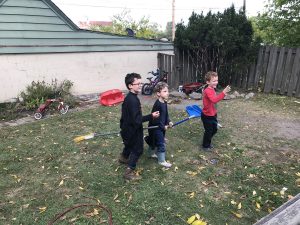 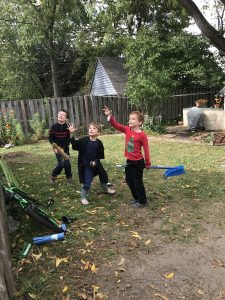 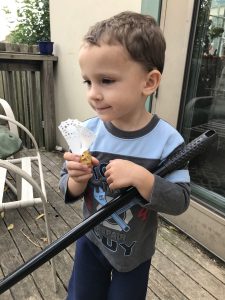