On September 30th of this year, my grandson Liam, turned nine years old. He requested a Harry Potter-themed party and did he ever get one!

Normally for a birthday Liam would get to choose an outing for the whole family as a special treat. But since most of the places they would go, zoos, parks, museums, and such were closed or seriously limited due to the pandemic, his mother decided to go with the Harry Potter theme and turn it into a memorable day.

She succeeded beyond anyone’s hope, due to a lot of research, preparation, and work. 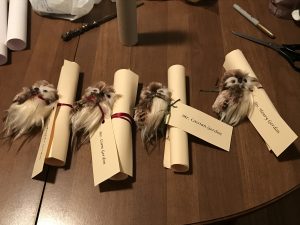 The fun started around ten in the morning when a knock on the front door led Liam and his three younger brothers to discover four small owls carrying parchment scrolls. Unfortunately I don’t have the exact wording now, but the parchment was an invitation to each boy to become a prospective student at Hogwarts School of Witchcraft and Wizardry and participate in a day of sample classes. Unfortunately, due to the Pandemic, classes could not be held at Hogwarts main campus, so their home had been granted Hogwarts extension status for the day. Classes would start soon.

A message ‘magically’ appeared on the door from the dining room out to the back yard, saying that Professor Snickerdoodle would arrive at eleven to begin classes.

The boys gathered in the “class room” (aka the dining room) at eleven. Professor Snickerdoodle (aka Mom) also arrived, with academic robes for each of the boys to ensure all would be properly clad and announced that the first class would be a start of The Defense Against the Dark Arts curriculum, namely “Wands.”

Each boy selected a wand (see below for notes on how the wands were created) and allowed to attach various “spells” (in the form of small stick-on jewels) to enhance its power. Then they studied and practiced the proper technique for waving the wand.

Next up would be a break for lunch and then Herbology! 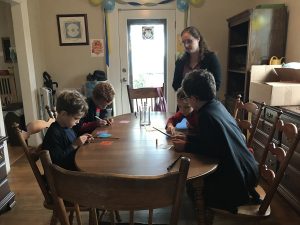 (Wands were made from chopsticks enhanced with raised designs on one end created with a hot glue gun, then painted with an acrylic brown paint and gold highlights.)