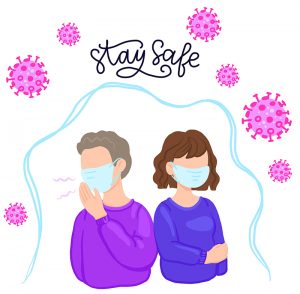 After talking with my Primary Care Doc a couple of times and a visit to the newly set up Covid Long-Haul Clinic in my area (neither of which was much help), I got an appointment with a local Pulmonologist who has a special interest in post-Covid care.

As an aside, let me say that there are times when I feel like a fraud as a Covid Long-Hauler. I can’t prove that I ever had Covid-19. Testing wasn’t freely available when I’m pretty sure I had it in March, 2020, so I never had a positive test. My primary care doctor said the symptoms sounded like Covid-19 but that’s the closest I’ve ever gotten to a diagnosis. An antibody test done five months later was negative. But I do know I had something remarkably like Covid-19 last March and a year later I haven’t fully recovered from it.

Dr. M., the Pulmonologist, read through all my written notes about my symptoms and the timeline of my illness, and I could tell from his questions that he took it seriously. I told him that I was looking for a way to get back to myself, the self who could and did sometimes walk for hours and hours a day without getting short of breath or collapsing from exhaustion. He was honest in return, telling me that medicine has no real answers for long-haul Covid at this point. But he would help me try to sort out the problem and do as much as we could toward a solution.

At this point I suspect the problem with my breathing and energy probably isn’t really in my lungs, but the PFE and CT scan should help sort that out. Of course, if there isn’t an actual lung problem, that leaves an issue that’s harder to understand and deal with. But at least I’ll know and maybe it will help shape the approach to a solution.

The neurological evaluation should get some perspective on my episodes of what others call “brain fog.” That doesn’t really describe my problem, which is more that I find it hard to concentrate at times. It’s not constant but happens often enough to be disturbing. And it really bothers me when I’m trying to work on the next novel, and all I can do is stare at the computer screen, unable to make myself write the next sentence. It’s not exactly writer’s block because it’s not that I don’t know where the story’s going next or what to write. It’s more that my brain just refuses to do the work to get the words together, even when I know what I want to say.

I’ve had a couple of the tests and others are coming up. I won’t get results from the breathing tests until my next appointment with Dr. M, which won’t happen until late May.

In the meantime, the last relapse has passed, and I feel mostly okay. I still have to be careful not to over-exert myself, to prevent a collapse that will take me out for at least the rest of the day and sometimes into the next day. Oddly, even trying to force myself to concentrate on a task for too long will bring on that kind of collapse, though it involves no obvious physical exertion.

And though I know that there are likely no easy answers for my problem, I’m happy to be doing something to tackle the issue. I’m not good at sitting around doing nothing.

BTW: I apologized to the doctor for the two pages worth of written notes and timeline I’d brought as I thought it might be an over-abundance of information. (I’m a writer, after all.) But he thanked me for it and said he wished more of his patients would do something similar. It gave him a much better picture of my problem than just a few questions in the office could do.