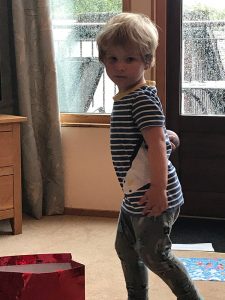 The weather was terrible on our last full day in Keswick. Rain poured down in buckets and the wind howled. We’d done most of the things we wanted to do in the area, anyway, so it was a good day to stay in, relax, and play with the children.

Stickers, art work, nerf balls, an impromptu ‘shop’, and rubber band target practice kept everyone occupied. Joe and Steph ventured out into the awful weather to get food and cake for all of us, which was much appreciated. It was a low-key way to end our stay in the Lake District.

The next morning, we said a melancholy goodbye to Steph, Freya, and James. Joe drove us to the bus station in Keswick, where we had a cup of coffee in the Booths café while we waited for the bus. It was still raining hard at that point, so we were glad of the shelter and hot drink.

We got the bus from Keswick to the Penrith train station. By the time we got there the weather had mostly cleared up. We enjoyed the views of the northern English and southern Scottish countryside on the train journey back to Glasgow. We didn’t pause for any sightseeing this time. We got a cab to a hotel right beside the airport. When we got there we enjoyed a leisurely drink, dinner, and an early bed.

The next morning we walked across the street to the airport to catch our plane back to New York. This time the flights went smoothly until the last leg of our journey, from Atlanta to Greensboro. Our plane from NY was held up at the Atlanta airport because the plane at the gate we were supposed to use had been delayed. Unfortunately, this was the only tight connection we had on the return trip and it took so long to get to the gate we weren’t sure we’d make it to the next flight in time.

Normally missing a flight from Atlanta to Greensboro wouldn’t be much a problem because there are quite a few flights between the city every day. But it was late and this would be day’s last flight. If we missed it, we’d have to spend the night in Atlanta, an unattractive prospect after a long, long day of travel. But, luckily the departure gate was only a few down from the arrival gate, when we finally got there. We sprinted down the terminal corridor, hoping… And we were lucky. The plane was loaded and ready to go but the crew knew we were coming in and hadn’t closed the door. We got back to Greensboro well after midnight.

Once we landed and I turned airplane mode off on my phone, I got a text from Delta saying that our luggage hadn’t made the same sprint from one plane to the other and it was still sitting in Atlanta. Not a disaster since we were headed home. Delta agents were waiting for us at the baggage claim in Greensboro. They already knew where our luggage was and that it would arrive the next morning. They arranged to have it delivered to us, and sure enough, it showed up at our front door the next day. Well, done, Delta.

At home, we dumped our carry-on bags and headed for the bliss of finally getting into our own bed after ten days of hotel and rental rooms.

It was great to be home, but we had terrific memories of all the fabulous things we’d done and seen on the trip. 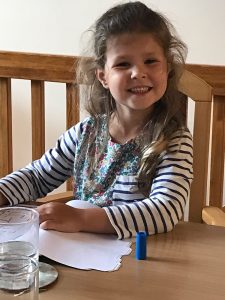 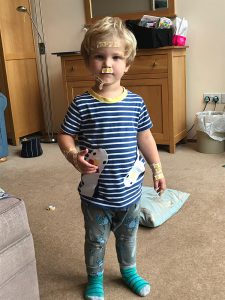 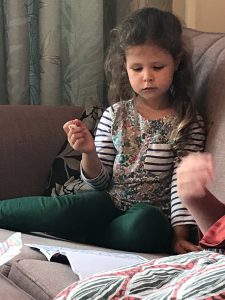 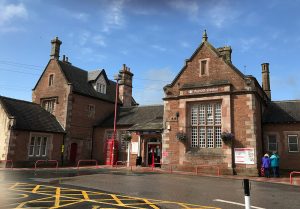 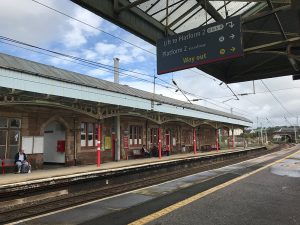 On the platform, waiting for the Glasgow train 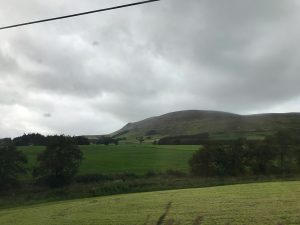 The Scottish countryside from the train