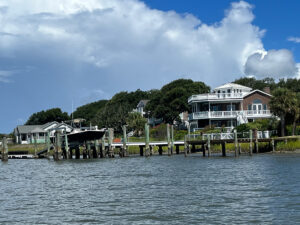 Toward Beaufort. Contrasting houses -an older home on the left with a newer one on the right.

After the visit to Cape Lookout, we turned and retraced our route a bit to get back to Beaufort for a tour of the city from the water.

The narrow channel between the Beaufort waterfront and one long island of the Rachel Carson Nature Preserve is a “no wake” zone.  What that means in practice is that you have to take your boat along it slowly to keep it from generating waves.

I understand the rule is to prevent damage to the many expensive seacraft moored on the waterfront, but riding the channel at a moderate pace is a good idea anyway. There really isn’t a lot of room between the island and the city and boat traffic was heavy on a beautiful August weekend day. That slow drift allows lots of time to enjoy the scenery as well and there was plenty of that to take in. 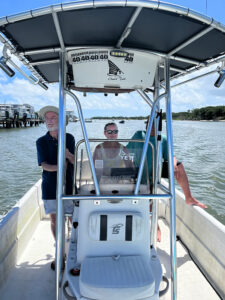 Liz piloting the boat in the channel

From the time you enter the channel, on the outskirts of the city of Beaufort, the waterfront is lined with marinas housing everything from dinghies to multi-million-dollar yachts. Honestly, there’s almost no stretch of land that doesn’t have docks with bunches of boats moored to them.

On the east side of the city the houses that line the waterfront are a mix of old and new. The differences are stark. The older houses are small, one or two stories at most, modest in both size and demeanor. The newer ones are large and rambunctious, taking up most of their lot, three or four stories tall, with huge windows and balconies all over. They’re built to house larger families or even multi-family groups. I’ve seen this same phenomenon at other beaches. The fact is, these days waterfront property is too valuable for small houses. 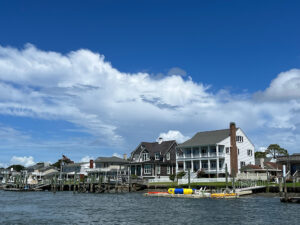 As we drift near downtown, the docks are clustered close together. There are some mega-yachts at anchor here. In fact, boats of all sizes call this area home, including some fun, touristy things. A floating tiki bar goes by and we pass a replica of a pirate ship called “The Revenge.” We’ll pass it out on the water later. The crew are dressed in Jack Sparrow-approved pirate gear and the kids get to fire actual (water) cannons.

On the other side of Beaufort, large banks of hotels and condos are springing up, along with more elaborate commercial and fishing operations. We turned around at the new bridge over the inlet between Beaufort and Morehead City. 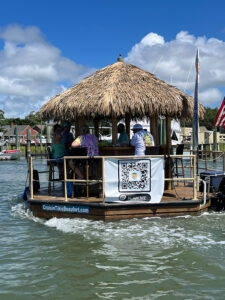 On the other side of the narrow channel in front of Beaufort is the Rachel Carson nature preserve, a group of low-lying islands, tidal flats, and estuaries. (https://deq.nc.gov/about/divisions/coastal-management/nc-coastal-reserve/reserve-sites/rachel-carson-reserve) Although the area is home to a wide variety of intriguing coastal flora and fauna, the most interesting to most people are the wild horses. We caught one brief glimpse of a couple of horses on the return trip, but I wasn’t able to get a decent picture.

Finally as the afternoon waned, we emerged from the channel and headed back to 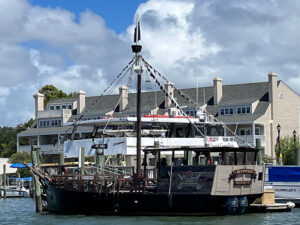 The Revenge – a tourist attraction. I believe that’s a dinner cruise boat behind it.

Harker’s Island, arriving with enough time to let us get cleaned up ahead of our dinner plans. 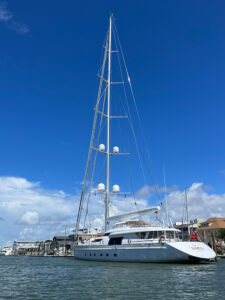 One of many large yachts 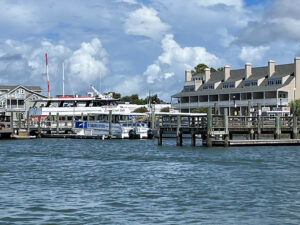 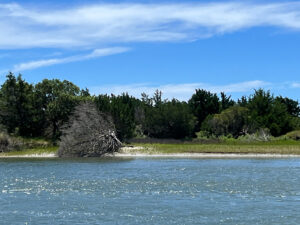 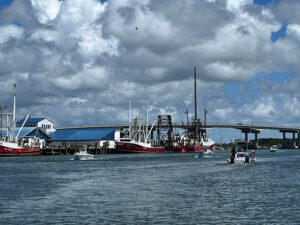 Commercial fishing operation with the new US 70 bridge