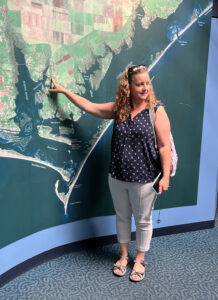 Liz points out the location of their boat business, DownEast Marine, on a large map!

Last weekend we got to spend a weekend with our daughter, son-in-law, granddaughter and grandson-in-law, and great-grandson on Harker’s Island, near Beaufort, North Carolina.

We had a wonderful time, checking out Beaufort, having some great meals, visiting the NC Aquarium at Pine Sholls. More on the Aquarium trip later in the week.

There were a few extra little moments – getting to hold and cuddle my great-grandson, passing the giant Blackbeard statue at DownEast Marine (the boat business owned and operated by daughter and son-in-law), and seeing a family of bears (mama and two cubs) run across the road in front of the car. Unfortunately, I couldn’t whip out my phone fast enough to get a picture of the bears. They were moving fast and disappeared into the underbrush quickly.

We also had a chance to cruise the area in daughter and son-in-law’s own boat. 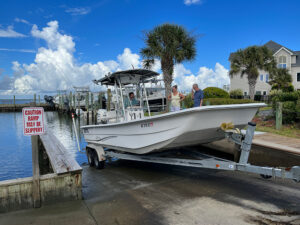 Once the boat was launched into the sound off Harker’s Island, we (four of us; the family with the young baby decided he wasn’t quite ready for his first boat trip) headed for Cape Lookout and its most famous landmark, the lighthouse there. It’s a quick twenty-minute jaunt in the boat, but navigation is tricky because much of the water is shallow, no more than a couple of feet deep in places. There are channel markers, but they can be hard to see.

Cape Lookout is an island that marks the southern end of the Outer Banks. It’s accessible only by boat, but there is a ferry (people, not cars) that runs from Harker’s Island. 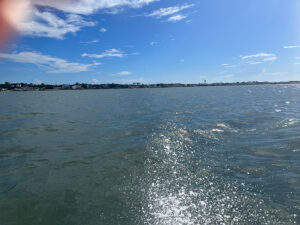 Harker’s Island in the rear view.

Cape Lookout island has a lovely beach, with soft sand, shallow, clear water, the lighthouse, and a small museum and gift shop. After anchoring the boat a few feet out, we (my husband, daughter, and myself) splashed onto the beach, through knee-high water that in August was very warm. Son-in-law decided to stay with the boat which let us leave our bags there.

We walked the beach to the lighthouse, stopping to admire beautiful shells, crabs, and other unusual sea creatures along the way. Small fish swam in the very clear water almost to the very edge of the light waves lapping the sand. A few other boats were moored with visitors, but we apparently beat the ferries, which meant only a couple of dozen other people in the area. 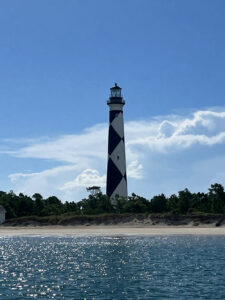 We didn’t plan to spend a lot of time there since we had other goals for the day. However, the clear blue sky offered a perfect backdrop for taking pictures. The museum does have a room with a 360-degree panoramic image of the view from the top. It’s pretty spectacular. We gave the gift shop a pass as since none of us had brought money or credit cards.

On returning to the boat, we caught Alan lounging in a floating chair off the side. But he has been driving us around, so no one is complaining.

Leaving Cape Lookout, we turned to the west and navigated our way around the Rachel Carson nature preserve with its tidal islands and shallow waters. We had only one minor incident of running aground, but the boat is a skiff (meaning flat bottom and shallow draft) so it was easy to get it off and running again.

The rest of the trip was kind of a sightseeing expedition, traversing the narrow channel between the Beaufort waterfront and the Nature Preserve. More about that in the next post.  More pictures below.  (Click to enlarge.) 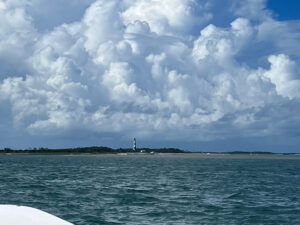 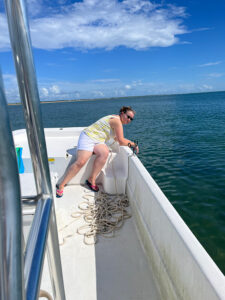 Liz dropping one of the anchors. 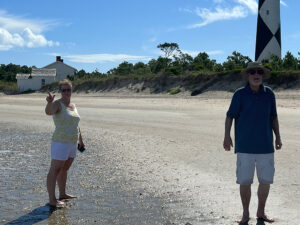 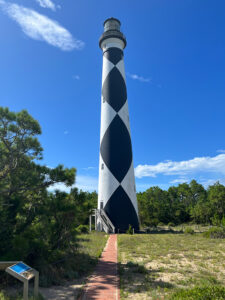 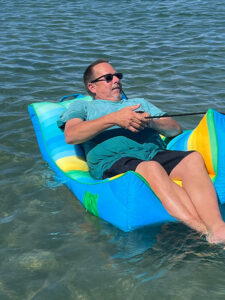