In August my husband and I ventured across the sea again. The ultimate goal was a week in the Lake District of England with our son and his family, but to get there we flew into Glasgow where we would get the train to Penrith and then to Keswick. But we’d never been in Glasgow, so we planned to spend a couple of days there before going on again.

Once again, though, getting there was not half the fun.

The first leg of our trip from Greensboro to Atlanta was routine. Yay! The next leg was definitely not. We took off twenty minutes late for New York’s JFK, which the pilot expected to make up in the air. And he did. What none of us counted on was that something had glitched at JFK and planes were lined up waiting for gates. We had to wait an hour an a half for a gate, sitting on the taxiway. We’d allowed plenty of time for our connection but a lot of people on the plane missed theirs.  I was starting to worry about making it when the connection time was down to an hour.

I needn’t have been concerned. As we were making our way from one terminal to another at JFK, the pilot of our flight was right behind us on an escalator, complaining to another pilot about the delay. He was especially perturbed because he was supposed to be flying to Glasgow in an hour.

But of course, it didn’t end there. Airport gridlock was still being untangled and we sat at the gate for 30 minutes waiting to push back and then spent the next hour and a half mostly sitting on the taxiway.  Because the flight attendants can’t serve meals until the flight is actually in the air, we didn’t eat dinner until something like one in the morning.

As usual I didn’t sleep on the plane and as usual it didn’t actually bother me very much.

We got into Glasgow around noon the next day, surprisingly just less than an hour late, breezed through passport control and got a taxi to the hotel, which is right in the heart of the tourist area of Glasgow. After having a quick rest and freshening up a bit, we set out to explore on foot.

The cab driver who took us from the airport to the hotel suggested a couple of places we should explore while we were there and we discovered a couple of them were only a short walk from our hotel. 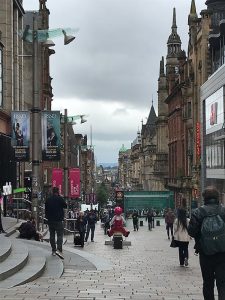 Part of Buchanan Street has been turned into a pedestrian shopping mall with a variety of shops, mostly of the upscale variety but interspersed with other, smaller shops. We had fun poking into various places, got lunch from a sandwich shop on Buchanan St., eaten sitting on the side of a subway station, then headed for the Glasgow Museum of Modern Art. I love art, but my tastes tend more to the traditional, however we were so close and it was free, so we figured, “Why not?”

I can’t say I feel terribly enlightened by the displays, although I did find some quite interesting! An odd piece by Eduardo Paolozzi called “Hamlet in a Japanese Manner” was appealing but made no actual sense to me. The museum’s piece de resistance was one of Andy Warhol’s Soup Can paintings, which I find amusing and even admit to some understanding of how his approach carries artistic meaning.

We spent more time wandering around, just admiring the distinctive architecture, looking in at various places and doing some shopping.

One of the lovely features of the old part of Glasgow at least, is how much they’ve retained of the old architecture, even when a building’s interior has been completely redone and repurposed. A lot of it is Victorian and much of it reflects the influence of Charles Rennie Mackintosh.

We stopped in at The Willow Tea Rooms for an early dinner since we planned on an early night after the short, mostly sleepless night before on the plane. The place features interior design and furniture created by Charles Rennie Mackintosh, most notably the very distinctive high-backed chairs. I ordered the traditional afternoon tea, and Jim had haddock patties with salad and a big cup of white mocha.  We were both well satisfied.

We headed back to the hotel in a drizzly rain. 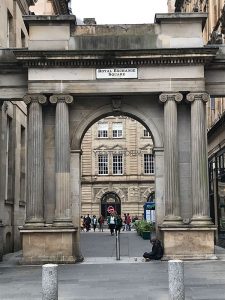 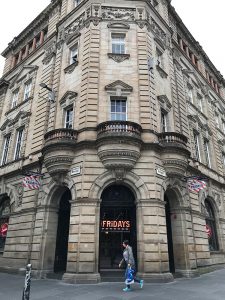 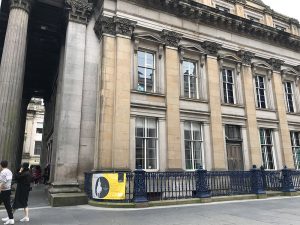 The Museum of Modern Art in Glasgow 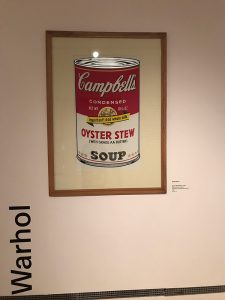 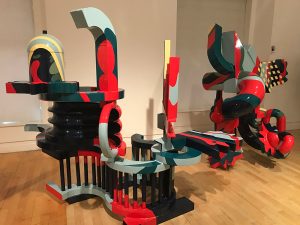 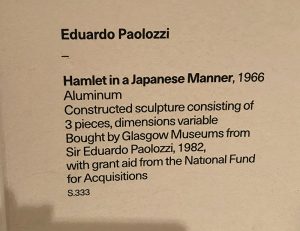 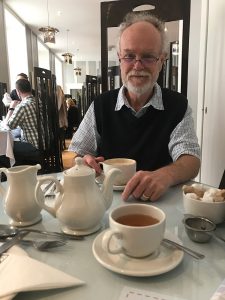 Dinner in the Willow Tea Room. Note the chair design! 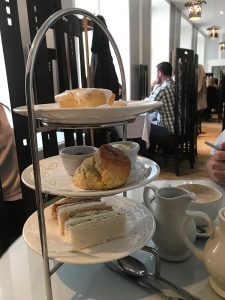