(Hint: It’s not because I’m a big fan of professional cycling!)

One of the wonders of modern television is the vast array of sporting events that can be viewed live, no matter where or when they happen. 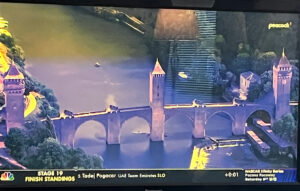 I like almost all sport, but time constraints mean I have to pick and choose which events I watch. Some are de rigueur due to their rarity and/or my rooting interest, like the Olympics, the World Series, the Super Bowl, and the NCAA Basketball Tournaments.

There are a few sports I don’t follow closely but enjoy watching certain events. One of those is the premier event of professional cycling, the Tour de France, which finished earlier today.

Our son got my husband and I interested in the race quite a few years ago, when he watched it at home. At first I was drawn in by the gorgeous French scenery (and that’s still a major draw), but this is the race that everyone dreams of winning, so there’s a lot going on beyond the obvious.

Grand tour road race cycling is an odd thing to watch. They are long events (three weeks), so there are long boring stretches when the racers seem to just pedal, pedal, pedal, with no obvious racing going on at all. Then suddenly someone will jump out in front, and usually everyone else will rush forward to catch up. Occasionally small groups will get away and sometimes stay away. For the most part, the last twenty minutes of a four-hour stage is when interesting things happen.

And yet there is always more going on. The more you learn about the race, the fascination with all of the permutations and tactics grows. Although there is only one overall leader, who wears the yellow jersey, there are other races within the race. There are contests for the best mountain climber and for the best sprinter, with places designated inside the race route for those contests, with points awarded for those who reach the spot first. And each day there is a stage winner, the person who crosses the finish line for the day first.  Those are all coveted prizes and competition for each is fierce. 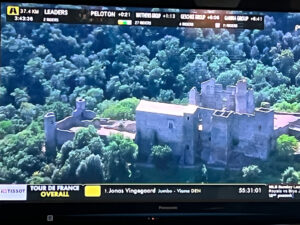 The tactics can be complicated and interesting, though fate often takes a hand in the outcome. Crashes happen, often tripping up cyclists guilty of nothing more than being in the wrong place at the wrong time. The bikes they ride are fine-tuned machines built for speed rather than endurance so pieces break, chains drop, and tires can go flat. Weather certainly played a part in this year’s tour with day-time temperatures on the course sometimes reaching over a hundred degrees.

Even though the race is contested and won by individuals, it is very much a team sport. No cyclist can compete without the support of strong team-mates, who can surround and protect him from road hazards, provide food and water during the stage, set the pace for the race, and even provide an extra bike to the leader should he (or she, since there are women’s races) have a crash or a mechanical issue. The overall contenders have to be individually strong enough to overcome all challenges, but the team provides necessary support.

This year’s race amply demonstrated the advantage a strong team can provide to the highest level cyclists. The winner of last year’s race was again matched up with the man who was a close second. But the defending champion lost half of his eight-man team by the end of the first week, either from illness (Covid is still a factor) or accidents. Last year’s runner-up had a stronger team around him to begin with and more of them made it to the end. When the stronger team goaded the defending champion with a flurry attacks (basically an attack is when a rider jumps off the front of the pack, hoping to get a lead), the man had to respond to all of them himself, and ultimately it wore him down.

A good recap of the race can be found here. (https://www.msn.com/en-us/sports/more-sports/incredible-vingegaard-wins-tour-de-france/ar-AAZV9Mm) 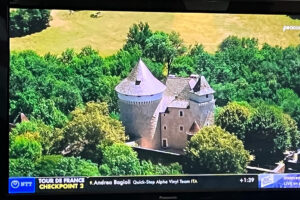 There are stories within stories. The race itself started in Denmark this year and the ultimate overall winner was a Dane. Two other Danish riders won stages. Another Canadian stage winner dedicated his win to his older brother who’d been killed by a hit-and-run driver while out jogging. Several young American cyclists made a good showing this year.

And, yes, there is a dark side. Even non-cycling enthusiasts have heard about the time when doping was endemic to the sport, and drug cheaters made the news. The sport has made significant efforts to clean things up, and testing is constant, but it would be foolish and naive to overlook the possibility that it still goes on. 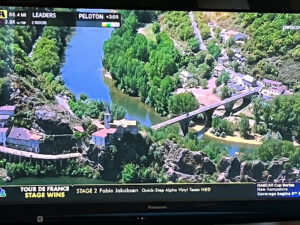 But there is still that wonderful scenery. They take the race title Tour de France seriously in the television coverage. The helicopter provides amazing views of lovely countryside surrounding the race route, gorgeous chateaus, rivers, bridges, mountainsides, etc. It’s a feast for the eyes and a wonder to the armchair traveler. I’ve taken a few pictures of the TV screen with some of those amazing views.