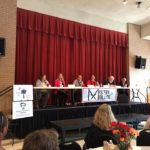 This past weekend I was fortunate to attend the Mystery in the Midlands conference held in Columbia, South Carolina.

Because I didn’t want to drive through Charlotte on a Friday afternoon or evening, I elected to get up early on Saturday (the day of the conference) and head south. Fortunately I left plenty of time for the three-hour drive because even on Saturday morning there were slow spots on the highways around the Charlotte area, particularly where they’re constructing a gigantic new interchange between Interstates 77 and 85. But the worst was a traffic jam just north of Charlotte, where a truck had gone off the highway and into the trees. The four police cars, three fire trucks, several tow-trucks, and an ambulance lined up on the side of the road forced two lanes of traffic to merge into one. Even at 6 a.m. on Saturday that had traffic backed up for several miles. 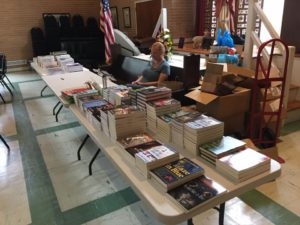 My books got a nice display at the bookseller’s table.

But I made it there by 8:15, in time to get my consignment books to the bookseller, get coffee, and say hello to a few old friends before the first session started.

The initial part of the day consisted of three different tracks and I chose to go to Jaden Terrell’s workshop on “Don’t Sweat it, Just Get it Written.” Although I have multiple completed novels under my belt, I felt a need to review the basics again and the workshop was very helpful. If you ever have a chance to take this workshop, I highly recommend it. 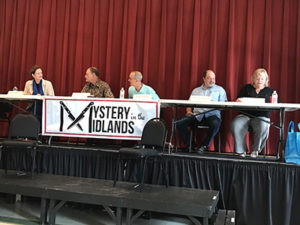 Then there was a panel discussion on Getting Real with Crime Fiction, where the panelists compared crime fiction with real life. These are authors who have been either law enforcement, military, or lawyers. So many interesting things came out of this one that I think I’m going to do another entire post on it. 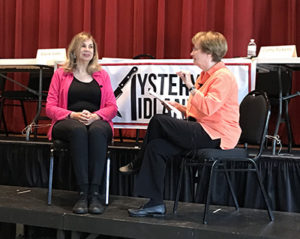 That was followed by an interview with author Elaine Viets. I enjoyed this hugely. Elaine is just as much a hoot in person as the characters in her books. Her Dead-End Jobs series of cozy mysteries is a favorite of mine. You can tell she has done the jobs she describes in her books and does she ever have STORIES!

Lunch included a fun game of “Guess the Author.” We’d each provided a little-known fact about ourselves. The other participants would try to guess who it was, and then we each got a couple of minutes to tell a bit about ourselves and our books.

(For anyone who might be interested: my factoid was that I was a gymnast in high school and college. I wanted to use something that people might actually be able to figure out – it’s a mystery writers’ conference, after all—and several people did. The fact that I’m barely five feet tall and still on the slim side despite weighing twenty-plus pounds more than the 100 pounds I was back in those days, provides a pretty strong clue.) 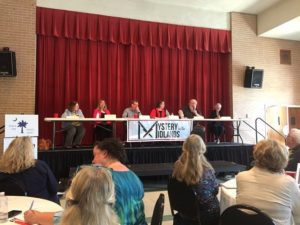 That’s me down at the far end.

My panel on writing short stories happened after lunch and included a distinguished group of authors, Warren Moore, Claire Count, Robert Mangeot, and Elaine Viets, with Paula Gail Benson moderating. We had some good discussion on the differences between writing novels and short stories, the challenges and rewards of writing short, the resurgence of the market and where and how to market them. 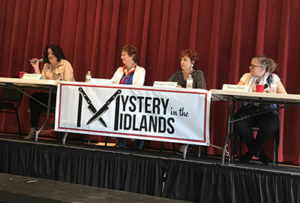 The next panel on Sizzling Characters was very informative. A group of wonderful authors (Maggie Toussaint, Raegan Teller and Stacy Allen, with Riley Miller moderating) talked about fictional characters that stood out to them and how they tried to make their own characters memorable.

The day wrapped up with a panel on Genres of mystery fiction, another interesting panel. I had no idea there were so many different subgenres of the mystery and thrillers. Again there was enough material to spark another blog post.

Knowing I’d be too tired to drive back from Columbia to Greensboro after it, I’d arranged to spend the night in the nearby Marriott. I ran into old friend Maggie Toussaint and new friend Rebecca Butler in the dining area/lounge and we had a very pleasant dinner. Afterward, I retired upstairs, caught the end of a replay of the penultimate day of the Tour de France (another blog post coming) and fell asleep.

I woke earlier than I expected Sunday but felt surprisingly refreshed. The drive back Sunday morning was blessedly uneventful. I’ve found that listening to podcasts helps the time pass more quickly when driving and I had several writing-related ones saved on my phone for just that purpose. Got home in time to watch the last stage of the Tour.

All in all, Saturday was a very good day and well worth the time and expense of being there. I sold a few books, got to spend time with old friends I don’t see as often as I’d like, and made some new ones. I learned a few things, and absorbed a lot to think about, but most of all I came away with renewed enthusiasm for my own writing. You can’t put a price tag on that!