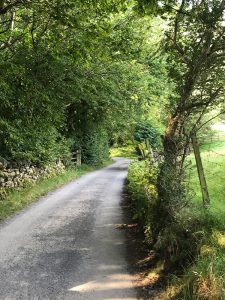 Setting off down the road.

On a beautiful, bright day we set off on different adventures. We all caught a bus in Keswick to a couple of towns a bit distant. Steph and Freya got off at one stop that was the starting point for ascending the mountain we’d seen on the boat trip the previous day, CatBells. It’s billed as a starter mountain, which made it feasible for Steph, an experienced climber, and for five-year-old Freya. It’s not even her first mountain. She scaled her first last year at age four.

However, my knees are not up to the rigors of a 1500-foot-ascent over 3.5 miles. Actually I could probably have handled the ascent, but descending is murder on bad knees. The rest of us, my husband and I, my son, and three-year-old grandson elected to tackle a more gentle walk, from the town of Grange to Rosthwaite along part of the Borrowdale Circular Walk, which follows the River Derwent.

We got off the bus in Grange, a tiny community with a café and a few dwellings, found the trail head, and set out. The path started out as a narrow, paved road, but eventually became a well-marked footpath that sometimes devolved into a less obvious trail. Still, we found our way with only one or two wrong turns that we usually figured out fairly quickly.

We walked past pastures and a campground before the path descended to the side of the River Derwent and stayed close to it for most of the distance to Rosthwaite. The total distance of the walk was around a mile and a half. We took it at a moderate pace with many stops, mainly due to three-year-old James. He was a trooper, going along with only occasional complaints, mostly toward the end of the hike. 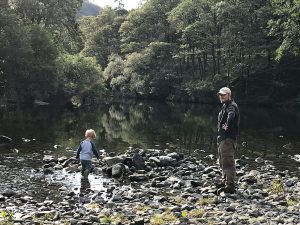 James splashing around in a shallow spot in the water

In a couple of places a broad rocky sort of beach gave access to shallow parts of the river. James wore his Wellies and enjoyed stomping and splashing around rocks in the water. In other places low cliffs at the water’s edge provided perfect launching spots for throwing stones into the river. There was no shortage of ammunition easily available and almost no end to James’s enthusiasm for testing his arm.

Scenery was magnificent for the entire journey. At times the hills closed in fairly tightly while in other places, the land flattened out in the valley, providing inspiring views of higher mountains.

Although it’s generally an easy walk, there were some fairly steep, although short, climbs, and a number of places where the hike was more of a scramble over rocks and scree. Some of the hills around us were rocky and heavily wooded with small caves and niches. In other places the path crossed pastures and led across some interesting bridges. 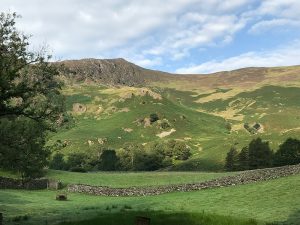 Eventually we made it to our destination, Rosthwaite, where we stopped for lunch at the Flock Inn Tearoom. After a strenuous walk, we were all ravenous. I got a bowl of Herdwick stew, which is mostly chunks of lamb, potato, carrot, and onion in a rich lamb gravy. It was quite good and very filling, especially when accompanied by a savory cheese scone.

Afterward we got the bus back to Keswick, and I think we all napped on the trip, being tired and well-fed. Just before we reached Rosthwaite I got a text from Steph saying she and Freya had reached the summit of Catbells and were beginning their descent.

We knocked around town for a while, then in mid-afternoon headed toward the side of Derwentwater and a café there to wait for the climbers, who would be returning via the boat. We had drinks and cakes to celebrate Steph and Freya’s achievement before heading back home. 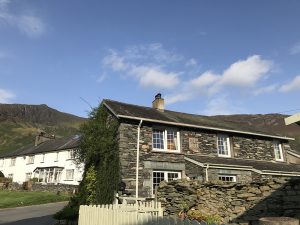 The village of Grange 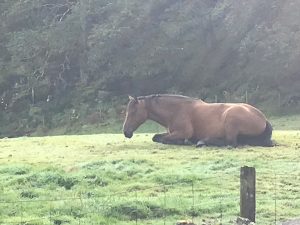 The horse ignored us 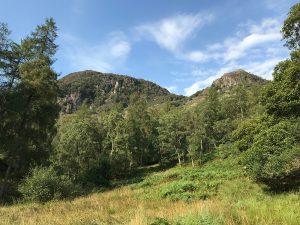 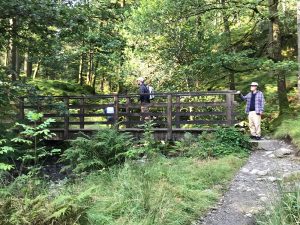 One of several bridges along the way 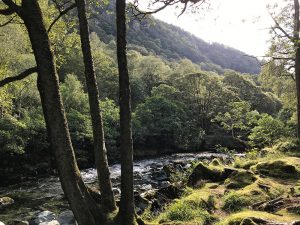 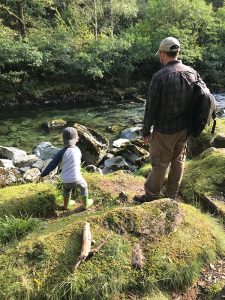 James showing off his throwing arm 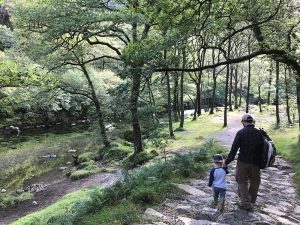 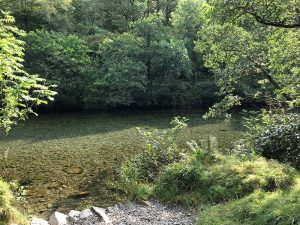 The water in the rivers and streams is amazingly clear 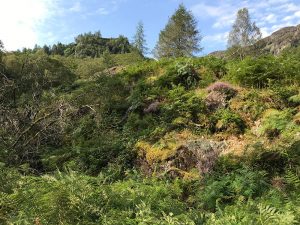 The purplish flower is heather 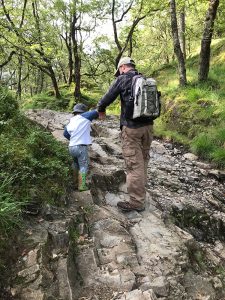 The path got a bit rugged in places 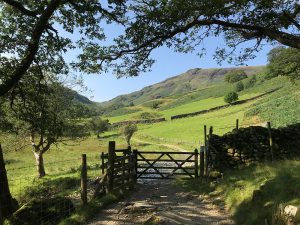 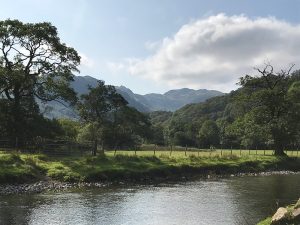 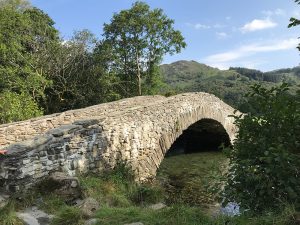 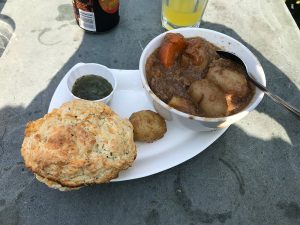 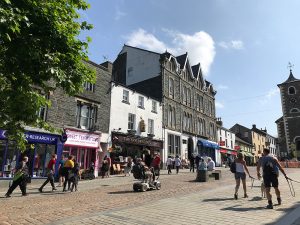