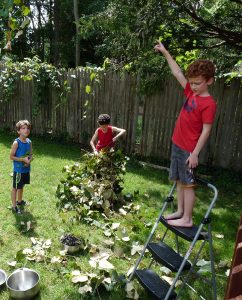 My daughter’s new house came equipped with a tree on which a Concord grape vine was growing. During our visit many of those grapes had ripened. There were a lot of them, and it seemed a shame to let them go to waste. On a lark, we decided to try our hand at making grape jelly.

The boys were more than happy to help. From pulling down the vines so we could reach to grab clusters off them, to stripping grapes from the clusters and then mashing them in the bowl, they were delighted to participate. 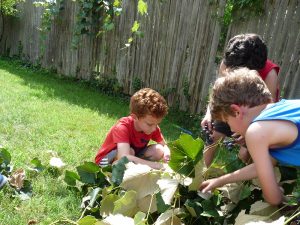 Being newbies to the whole process, Sarah and I relied on online sites and directions. We followed along carefully, and on the whole it worked out well.

After boiling the fruit and straining, (a process we didn’t let the boys help with) we ended up with four cups of juice. We let that sit overnight (per the directions), which gave us time to go out and buy canning jars, pectin, and another bag of sugar. 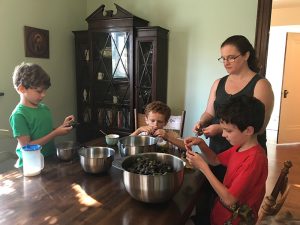 The next day we started by boiling the jars and lids to sterilize them before we went ahead to the next step.

We brought the juice to a boil again and added in seven cups of sugar. We were stunned at how much sugar it called for, but several recipes warned us to follow them exactly, so we did as they said. Once the mixture was boiling, we added the pectin. 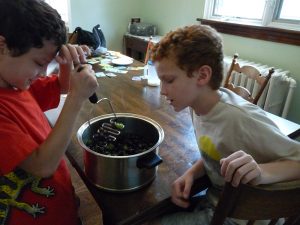 After boiling for a bit, we were directed to skim off the foam. The directions did not warn us that of the seven inches of goo in the pot, five of them would turn out to be foam. We scooped and skimmed, scooped and skimmed, and began to wonder if there really was anything else beneath it. 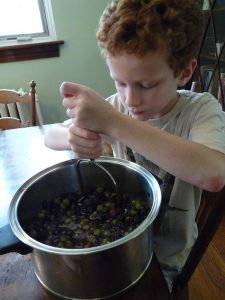 Finally, though, we got down to the clear goopy liquid that was molten jelly. We had enough to fill five pint jars, which then went into the water bath for another 5 to 10 minutes to seal them. On first taking them out of the water, the top of only one jar felt like it had squashed down a bit, indicating it had sealed, but after sitting a few minutes the rest developed that indentation as well. 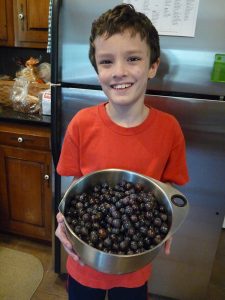 After skimming, we were also left with some of the actual liquid jelly that had a bit of foam still mixed in. We decided to see what would happen if we poured that into jars, too. Instead of putting them in the hot water bath, those jars went into the fridge after they’d cooled. 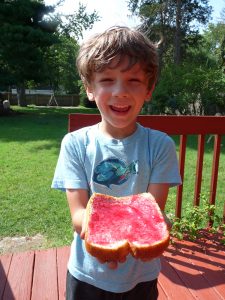 Did it jell? Oh, yes. Our first indication it had worked came when the boys scooped up a few blobs that had spilled on the counter. Those had congealed into glumps that matched the texture of jelly from a commercial jar. The smiles indicated they passed the taste test.

The bit of foam mixed in meant those last jars of jelly didn’t look so beautifully rich and crystal clear, but it nonetheless congealed into something that looked and tasted very much like Concord grape jelly. Spread on slices of bread, it got the boys’ seal of approval.

The five jars of pure jelly looked spectacular, beautifully clear and richly grape-colored. The oldest provided us with hand-crafted labels for the jars. 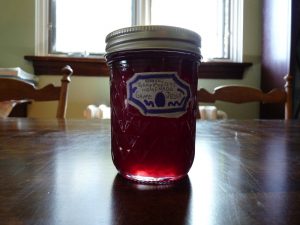 Once, many years ago, I acquired an unexpected bounty of plums and I made jam from them. I recall that it was fun, and the jam tasty, but it involved a lot of work, even though I didn’t attempt to seal the jars, but kept them in the refrigerator instead. I think we only got about two jars’ worth, but we enjoyed the taste. That’s the only previous time I’ve made the effort.

With a crew of helpers working on it, though, it made for a fun project, with an end product that everyone could relish!