Christmas didn’t start well for the McCullough family, and me in particular.

In early December we began to put up the tree balls that are a characteristic decoration of our neighborhood. Tree balls are chicken wire frames crushed into a spherical shape and wrapped in strings of lights. The trick is that they work best when hung high in the bare branches of the many old oak trees in the area. 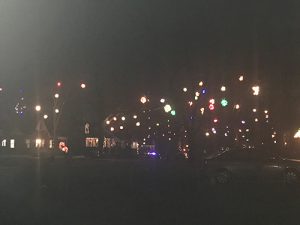 We don’t put up a lot of them for various reasons, but I had eight ready to go. We managed to get four up in the back yard and three in the front when the slingshot we use to get the cord high in the tree suddenly broke. Not the rubber bands that you pull back, but the frame itself, which simply snapped. We decided we could live with only seven balls in the trees rather than eight.

Until we had a windstorm a few days later and the cords broke on two of the balls in the back. Using a baseball and lots of duct tape we managed to get those two back up, though not as high as they’d been. Another few days and one of the balls in front came down. At that point the weather had turned bad and when it cleared we were deep into other Christmas things, so we declared the ball a yard decoration and left it on the ground. 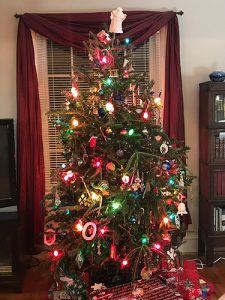 Then there was the tree. Traditionally we’ve bought a fresh tree to perfume the living room with that lovely pine aroma. I’d been warned to shop early because trees were going fast, but it turned out that the eighth of December was too late. The lot I’ve been going to for the last twenty years was down to their last trees and they were a pretty sorry lot. I picked what I thought was the best of the group and brought it home.

After considering our age, the inconvenience of having to select, haul, water, and clean up after a live tree, we decided that next year we’re going to get an artificial tree. That decision became relevant when we discovered that the tree stand was leaking water. Since we didn’t want to invest in another tree stand, we went to work with more duct tape and a plastic garbage bag. It worked! No water leaked out once the tree was set up.

The next curveball thrown by 2020 was for me alone. I’ve made no secret of the fact that I had Covid-19 last March, and I’ve also shared that I have still have symptoms and relapses nine months later. While preparing for some family coming for Christmas (more on that later), I had another Covid relapse (headache, cough, muscle aches, and awful fatigue). And just as I was getting over that I developed painful back spasms.

A call to my doctor’s office resulted in a prescription for muscle relaxers, and suggestions to use ice, heat, and ibuprofen. Fortunately, after a couple of days those worked, and the spasms subsided.

By then my daughter and her family had arrived from Indiana. To make the visit possible, the entire family isolated themselves for two weeks before setting out to be sure they wouldn’t be bringing any germs. They minimized stops on the way here and were masked for all of them. 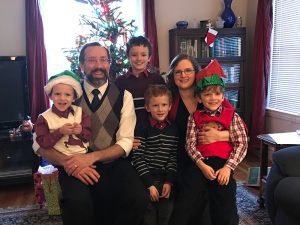 After that inauspicious start, we had a good, if somewhat muted Christmas. Other than a few trips to local small playgrounds, we did no trips out other than runs for last minute gifts or to the grocery store and we did miss some of the places we’d normally go. Equally we missed many of the people we’d normally see over the holiday, but we look forward to a future where we’ll be able to do those things and see our family and friends again.

In the end, the rest of the tree balls held and the neighborhood display showed its usual magnificence, the scraggly tree looked warm and friendly when decorated, disguising its bending trunk and the lack of branches from the middle of the tree to the top on one side, and having the family around was great. And, even, though we couldn’t see many of the people we normally would, warm wishes in the form of texts, emails, phone calls, Facetime, cards, letters, and even Facebook posts reminded us how fortunate we are in the network of relatives and friends we have. Even if we couldn’t be with them, we were aware of their presence and good wishes, as we did our best to provide the same for them.