Posted on September 11, 2018 by Karen McCullough

The Romney, Hythe & Dymchurch Railway is a 15-in gauge light railway in Kent, England, that operates small trains between Hythe on the northern end and Dungeness on the southern end. It features coal-fired, steam-powered engines kept in pristine condition that pull a train of five to a dozen passenger cars. It looks like a beautiful, overgrown toy, but it works and is popular with locals who use it to commute between towns and tourists and holiday visitors who come in summer for the beaches and mild climate.

(Pictures are at the end and you can click on each to see a larger version.)

During our recent visit we got on at Hythe and rode it all the way to its far terminus in Dungeness. The trip takes about an hour, with stops at three stations in between, rolling through long, scenic stretches of the Romney Marsh (now drained and reclaimed for farm and grazing land).

Dungeness features one of the strangest landscapes imaginable. It sits on a spit of land that juts out into the English Channel, coming to a sharp point. Most of the surface is shingle (rocks), ground into sand in places. Vegetation is sparse and mostly in the form of a low-growing plant that my daughter-in-law called sea cabbage.

Habitation is equally sparse but a few widespread cabin-like houses do occupy the land. Many of them are painted flat, matte black. Mostly they belong to fishermen these days since the land is useless for agriculture or grazing. Some of the few residents work at one of the two nuclear power plants situated there. (We’re told one has been decommissioned and no longer functions.) It’s not hard to see why someone might decide it was a good place for an operation on one wants nearby.

Because it’s on a point that sticks out into the English Channel, there are two lighthouses to warn shipping traffic away, an older one and a new electric model.

The day we went was beautiful, with plenty of sunshine and reasonably warm temperatures, so we spent quite a bit of time on the beach. The kids ran around on the shingle, studying the stones, finding the occasional shell, and watching the water.

Next we visited the Old Lighthouse and climbed all 169 steps to the top, including the last dozen or so that were actually more ladder than staircase. Signs recommended that people descend those steps backwards and we all complied. Thoughtfully the lighthouse managers provided interesting displays on two intermediate platforms, providing a welcome excuse to pause and catch your breath periodically.

The observation deck at the top provided a panoramic view of a landscape that looks just as beautifully bleak from above as it does on the ground. Looking north, on a clear day you can see Folkestone and the white cliffs of Dover. On the east you can see France across the channel. The water was gorgeously blue that day and several large ships were visible in the distance.

A late lunch came from The End of the Line restaurant. It wasn’t gourmet food, but the kids enjoyed the fish and chips, and I found the scampi and chips quite acceptable.

On the train trip back to Hythe both children fell asleep and the rest of were a bit dozy as well. But we’d had a terrific day. 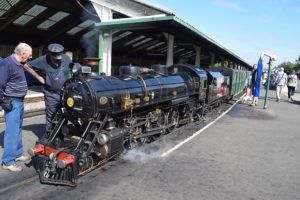 One of the trains on the line. 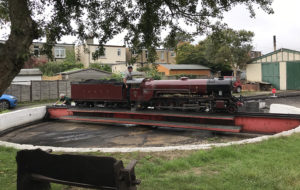 We were on the first train of the day and they had to bring the engine from another station. We wondered how they would turn it around and here’s the answer. 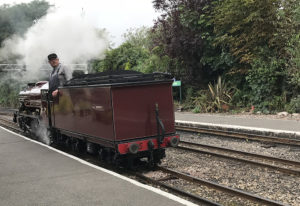 After turning it around, he backed it up to the cars. 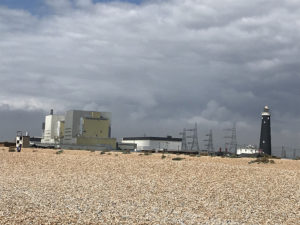 Dungeness. Nuclear power plant on the left, old lighthouse on the right. 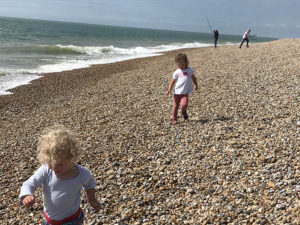 Freya and James playing on the beach. 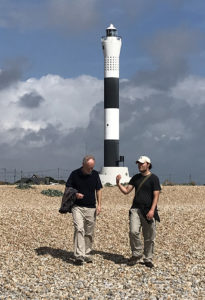 Jim and Joe in front of the newer lighthouse. 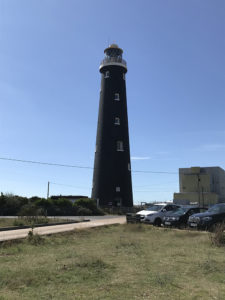 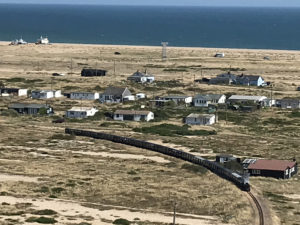 View from the top of the lighthouse out to sea. A train is just pulling into the station below.