Posted on October 4, 2019 by Karen McCullough 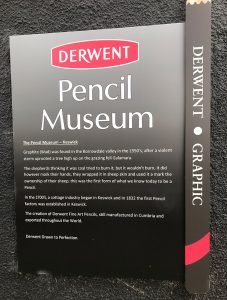 Our fourth day in Keswick was rainy and cool, and we’d all had fairly major efforts the previous day, so it seemed a good time to visit one of Keswick’s few indoor attractions – the Derwent Pencil Museum.

A bit of quick history – Writing instruments of all sorts have been in use for thousands of years, but a sort of proto pencil was a lead-based stylus used since the time of the Romans (which is why we still call them “lead pencils” even though lead hasn’t been used in pencils in hundreds of years).

The modern version of the pencil dates back to the 16th century with the discovery of a large deposit of graphite near Keswick in the Borrowdale Valley. The story says that it was found by accident by a group of shepherds who, on finding that it wouldn’t burn like coal, used the mineral to mark their sheep. But they soon discovered it left marks on their hands and other things that were hard to remove.

It didn’t take long to realize the mineral was too soft to use by itself, but stuffed into a wooden tube, it made an easy-to-use writing instrument.

By the early 18th century a cottage industry creating pencils had grown up in Keswick and the surrounding area. In 1916 the Derwent Cumberland Pencil Company or sometimes just called The Cumberland Pencil Company was formed to manufacture pencils. The first Derwent color pencil was produced in 1938. The Derwent brand is still recognized for producing some of the finest artist’s pencils in the world. 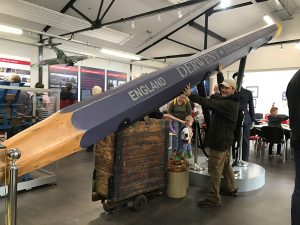 The factory has since moved, but the museum remains in Keswick. It’s a fascinating place. In addition to displays showing the history of the pencil, there are numerous historical items, a look at the manufacturing process, the varieties of pencil and art supplies now available, and a couple of fascinating, related stories. It also features the world’s biggest pencil, as certified by the Guiness Book of World Records.

During World War II, Britain’s secret service operatives worked with the company to develop ways to incorporate various bits of miniaturized technology into the pencils. They were also used as a method for passing secret messages. None of this has ever been officially confirmed, of course!

The museum has plenty of art opportunities for children. And it also includes a café with a delicious assortment of cakes, and while we were waiting, we got to try out Derwent’s brilliant water color pencils. We did some gift shopping in the gift store before we left.

Later, the guys and kids went back to house while Steph and I did some serious shopping in the many outdoor equipment shops for her birthday and James’s. 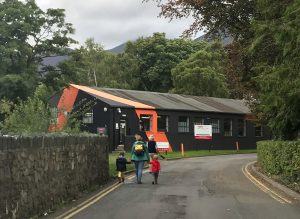 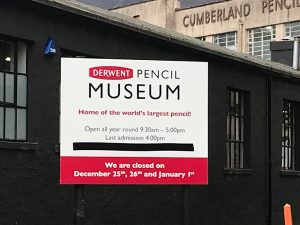 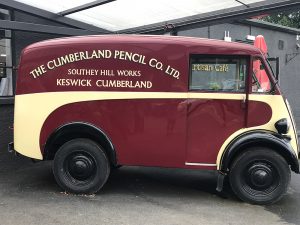 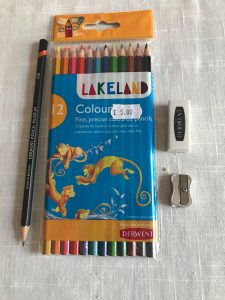