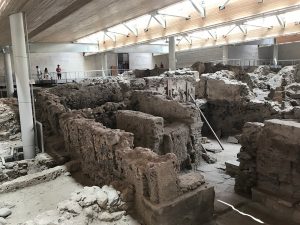 I woke refreshed after a good night’s sleep and ready to take on the day. It began with the relatively long (about 25 minutes) drive from our place on the northern end of the island to the southern end where we paid a visit to the excavations of the ancient town of Akrotiri.

Akrotiri was a Bronze-age Minoan settlement that was buried under tons of ash, dirt, and rock by the explosion of the volcano around 1600 B.C., which left a lot of it well-preserved. The good news for the inhabitants is that unlike Pompeii and Herculaneum, no human remains have been found, indicating there was enough time and warning for the residents to evacuate before disaster fell. However they left behind frescoes, mosaics, pottery and other works of art. Most of those are currently in other museums. We saw some of them in the National Archaeology museum in Athens.

The excavation covers the territory of a good-sized village. You come in at the top of the dig, which starts at the third story level of the buildings. A canopy has been built over the entire excavation to prevent damage from the elements. A walkway leads you around and then through the area excavated, going down to the next level for part of the journey. It takes some stretch of the imagination to visualize what the mostly bare stone walls and structures must have looked like, particularly when most of the artifacts and the few surviving frescoes have been removed to museums to ensure their preservation. 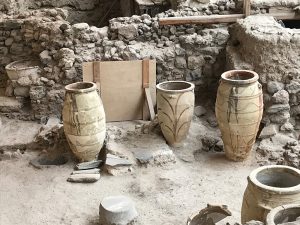 A few beautifully decorated pots were left on display.

However, you can clearly see some decorative stone lintels around doorways and windows; some gorgeously decorated amphorae have been left in place; and there are looped videos that show what some of the buildings would probably have looked like at the time of their use. These buildings were far from the crude stone huts one might think from the remains. Many of them were three stories tall. Interiors were built with wood paneling and decorated with extensively frescoed walls. Wood furniture was likely common, though it hasn’t survived the many years of being buried the way the stone has.

After Akrotiri, we headed to town of Imerovigli, the third town built on the cliff leading down into the caldera. It isn’t as big as Fira or Oia, but it’s just as charming. Refueled by a gelato break, we spent some time exploring the town on the cliff-top trail. From there we proceeded to Fira again,where we had a snack-type lunch break and got on with the serious business of souvenir and gift shopping. 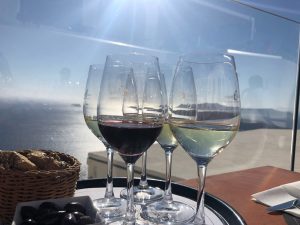 The wines and snacks – all good!

Then it was on to the feature of the day, a wine tasting at the Santo Wines Vineyards (https://www.santowines.gr/en/). Santorini has a number of vineyards and wineries, with Santos being one of the bigger ones. It’s very much a tourist-focused place that is a popular venue for destination weddings.

We’d signed up for a tasting flight of five local Santorini crispy white wines along with snacks of small bread bites and mixed olives. I’ve always liked green olives, but I’ve never been a fan of the black ones. Still I ate quite a few there and enjoyed them. I’ll have to try some at home to decide whether my tastes have changed or the black olives were just better there. The wines were all delightful too, (including the one that was red rather than white, but still dry and crisp), but we pretty much agreed on our favorite, a light, refreshing white, the Athiri. 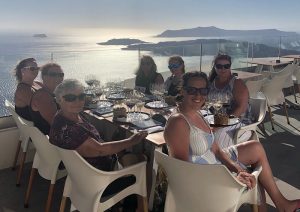 The gang at the wine tasting.

We were comfortably ensconced at a nice table on the rail overlooking the water. After spending a couple of hours over the wines and snacks, we decided to just stay put, order dinner, and enjoy the sunset from where we were. We lingered happily over shared trays of mixed salad, cheeses, and meats while watching yet another magnificent Santorini sunset.

As darkness fell and we shared a few deserts and the delicious Vinsanto dessert wine, we got a bonus. One of the weddings being held at the place put on a nice fireworks show for us. With the sun gone, the evening grew rapidly cooler. But the waiter brought us blankets to wrap up in so we could enjoy our dessert in comfort until we were ready to call it a day. 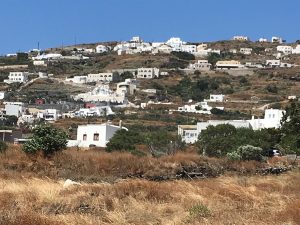 On the other side of the island 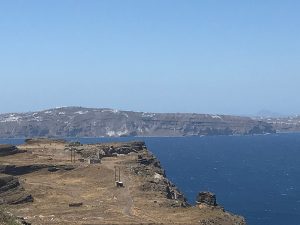 Watching the sea from the buggie 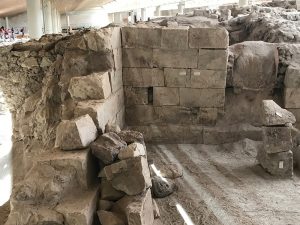 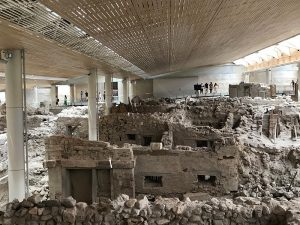 I’m particularly fascinated by the way complex houses emerge from the surrounding ash and dirt they were buried in. 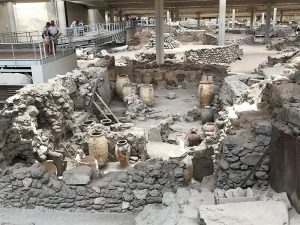 This was probably some kind of workshop. Note the pots that are still partially buried toward the back. 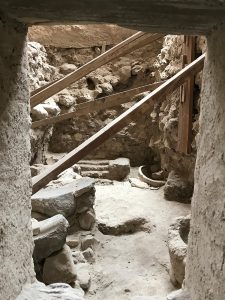 Down a level inside the ruins. 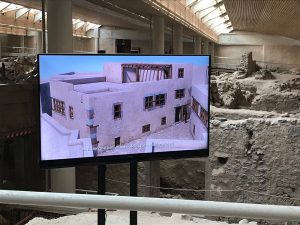 Screen showing archaeologists’ and artists’ rendering of what the building behind might have looked like in its day. 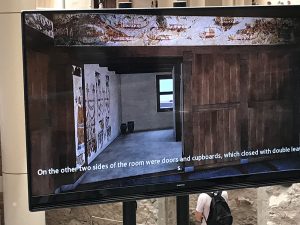 Recreation of the interior of that same building, which was probably living quarters on the ground floor and some kind of workshop on the top. 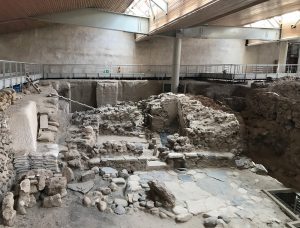 Decorative slate floor is part of the original building. 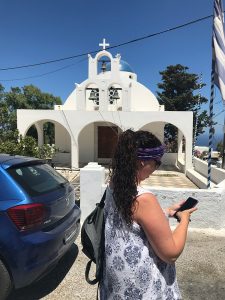 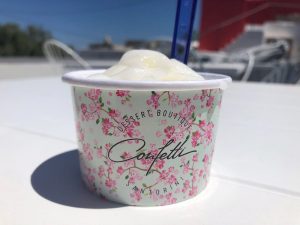 Gelato at a Dessert Boutique that featured gorgeous sweet treats. 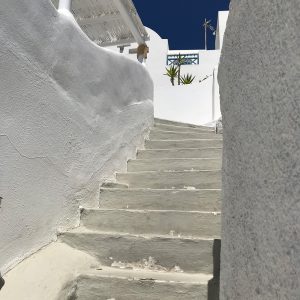 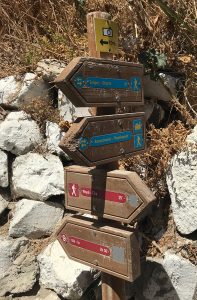 Signpost on the cliff walk in Imerovigli. It says walking time to Fira (arrow pointing to the right) is 25 minutes. Time to Oia (the sign right below it) is 2 hours, 30 minutes. 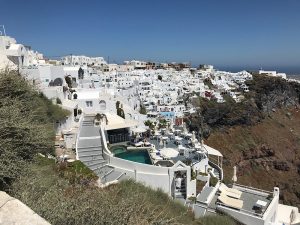 The town of Imerovigli 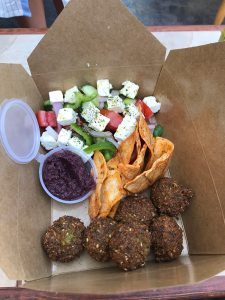 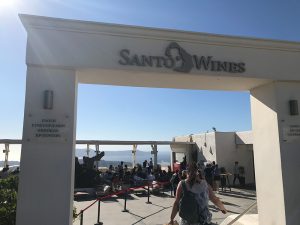 The wines and snacks 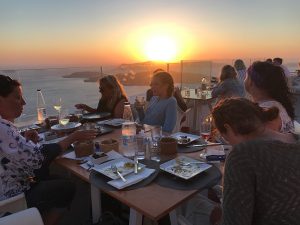 Finishing dinner as the sun descended 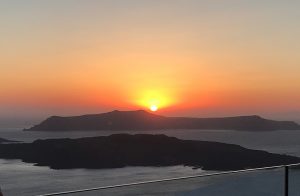 And yet another spectacular sunset.