The Night Prowlers is Available Again

Posted on February 12, 2012 by Karen McCullough 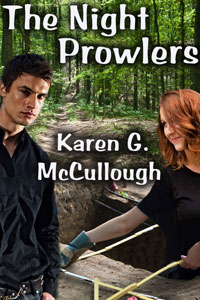 The very first book I sold to a publisher was a short, fairly light contemporary romantic suspense with some Gothic elements.  The Night Prowlers wasn’t my original title for the book, but it’s actually better than the one I was using, so I’ve decided to keep it.

It was  published in hard cover by Avalon Books in 1990, and made its way into a lot of libraries.  A few years later, when they were all out of print, I was able to get the rights to my four Avalon books reverted back to me.  At the time I got the reversion letter, there was nothing obvious I could do with the books, so I sat on them for a long time.

Then came epublishing and Amazon’s self-publishing platform for Kindle, followed rapidly by Barnes & Noble’s Nook, and others.  Time to consider those older books again.  I pulled them out and was pleasantly surprised to find that they were still pretty good stories.  Unfortunately they were so old that I no longer had the manuscripts in electronic form.  They were originally writing on a PC and saved on a handful of 5 1/4″ floppy disks.  Anyone remember those?  Me, either.  Nor could I find those disks. Not that it mattered since no one I knew would have any way to read them, and even if I did, they were stored in a propietary format and I no longer had the software to interpret it.

So I got out my scanner, got OCR (Optical Character Recognition) software and set to work scanning them in. I started with my very first. Once I got through the scanning, I had to go through it to edit out scanning errors.

I also realized there were a few awkward phrases and some things that were dated, so I fixed those, too.  Then I hired my daughter, a professional editor, to go throught it.  Finally I formatted it for epublishing, put it up and now it’s available again for the first time in more than 20 years!

To the left is the original Avalon cover for comparison with the one above, which I created for it.

I’d love to hear what you think abou it!

Links to buy the current version:

This entry was posted in Books. Bookmark the permalink.