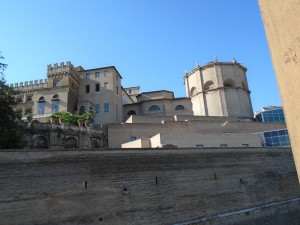 The Vatican Museums as seen from our hotel room.

We started the morning with tickets to the Vatican Museums. If you’re planning to go, be sure to pre-book your tickets online. The line for pre-booked tickets moves much, much faster! We got in within ten minutes. On the advice of others we went directly to the thing we (and pretty much everyone else) most wanted to see: the Sistine Chapel. Good advice! The room was crowded but not packed so tightly we couldn’t breathe. (And by the way, it’s a LONG walk from the entrance to the Chapel. It took us almost 25 minutes, just to get there – Following huge mobs of tour groups.)

The line to get into the Vatican Museums.

The chapel itself was more than worth the effort. Michelangelo’s ceiling is just as awesome as reported…maybe even more so, since the pictures rarely show the full scope of it. Although not as enormous as the cathedrals, it’s a fairly large chapel and he painted every bit of the ceiling as well as one entire wall and a few other frescos in the room. Other side frescoes were done by Botticelli, Pinturino and Ghirlandaio, among other well-known painters. Those Renaissance popes had so much wealth and power, they had the very best Italian artists of the day at their beck and call. They didn’t allow photography in the chapel so I don’t have any pictures from it, though they did allow it in other areas. 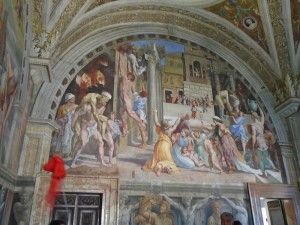 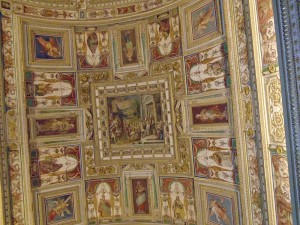 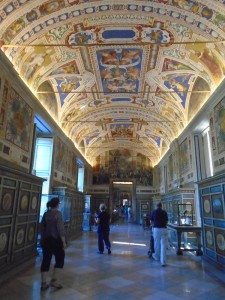 Other notable places and pieces… There were rooms full of frescoes done by Raphael; some amazing tapestries, the statue of Laocoon, and other assorted pictures, and objects, too many to describe. The museum is a huge collection of rooms. Laid end to end we were told they’d be seven kilometers long. We believed it. We passed through a number of very long corridors. One of the more impressive features is that in most of those corridors, every surface is covered with paintings, carvings, mosaics, or some other artistic expression. The impression is of richness that sometimes spills over into gaudy. 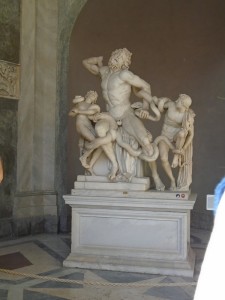 One of the better-known statues in the Vatican.

Four hours of the museum pretty much cooked us, and we’d seen the things we most wanted to see, so after a late lunch and a rest we went for a final walk in Rome. Our hotel was right across the street from the Vatican (quite literally) so we walked in that area. Our main object was to try to find a travel agent to buy train tickets, since the very helpful young woman at the hotel had suggested it would be easier for us to get them that way than to buy them at the station, but it would cost the same. She told us where to find two travel agents, but both were closed. We walked some more and stopped at a gelateria for an ice cream break.  As we started back, Steph noticed a travel agency right next to the gelateria, which was open with one bored-looking young woman at the desk. She made the train reservations for us. 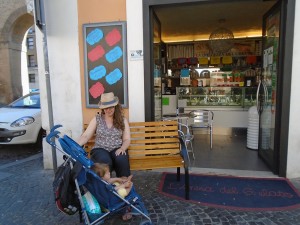 We walked again and found a nice little playground area in the shadow of Castel Sant’Angelo where Freya had a great time on the slides and swings. It also had some nice shady benches for us.  After a while we got rolling again and started back toward our hotel. 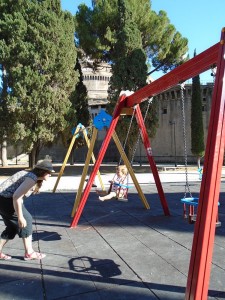 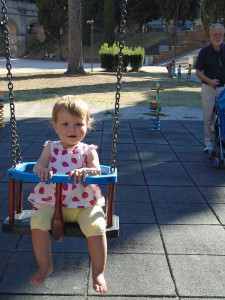 One of the routes back took us through St. Peter’s Square, so we thought to say good-bye to it. As we approached, we noticed things were different. There was no line to get into the Basilica and much of the square had been cordoned off with barriers. We could see something was happening on the steps. The police manning the gates into the square let us through with no trouble and as we got closer it became obvious something big and formal was happening since there were a couple of rows of dignitaries on the platform right in front of the basilica. Several huge screens were set up to show closer images of the event. Right in the middle of the group on the platform sat Pope Francis himself. Most of the ceremony was in German, though there were songs in English (a youth choir performed a nice rendition of ‘Here I Am, Lord’) and other languages. The Pope himself spoke in Italian.  We later learned that the ceremony was for the National Pilgrimage of German Altar Servers. 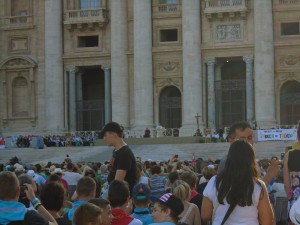 The Pope is sitting between the two columns in front of the center door. 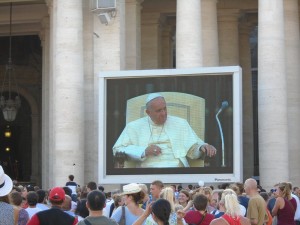 He was easier to see on the big screen.

Seeing the pope in person like that, even though he was little more than a white speck in the distance, (but they did project him onto a number of huge screens around the square) felt like the cherry on the ice cream sundae that has been our trip to Rome.  We had dinner at a place recommended by the woman at the hotel, a slightly nicer restaurant with good food.  As if to remind us that nothing is perfect, Jim spilt red wine on his trousers, pretty much ruining them, and Joe lost his travel bag there. Fortunately nothing of critical importance was in the bag, but it was a favorite. 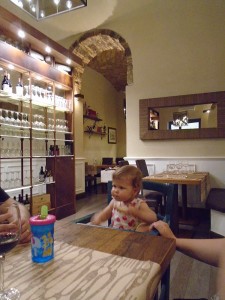 The next day we would say Arrivederci, Roma, and head to Florence.