On Sunday morning, I was not at my best after not sleeping much the previous night. We had a pipe dream about going to Mass at St. Peter’s but our dream crashed into the Roman reality of huge crowds and incredible heat. The line to get in was ridiculously long, and at mid-morning the temperature was soaring to well above 90. We decided that God had declared we needed a break this morning and went back to the hotel for private prayer, meditation and reading.

In the afternoon, we met Steph, Joe and Freya at the National Museum of Rome. The building we were at was one of five that made up the museum. This one had magnificent displays of domestic frescos, including one entire room transported from the home of the early Roman, Livia, wife of Emperor Augustus, to the museum in large slabs. They didn’t want to have to remove them, but the site was subject to flooding and the frescoes in danger of being ruined. These were far too wonderful. They had to be preserved. 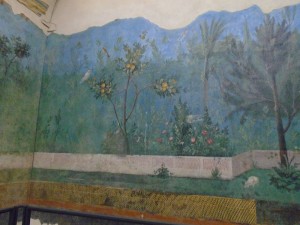 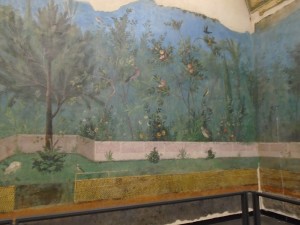 Also featured were some amazing mosaics, including some that covered an entire floor at one time. First and ground floors of the museum were mostly statuary. In fact there was a lot of statuary in all the museums we visited and I’m sure that most of it was wonderful. Unfortunately I don’t know near as much about it as I do painting, so it was hard to appreciate it in any real sense other than it’s astonishing age, with most of it dating back to more than a thousand and sometimes two thousand years. 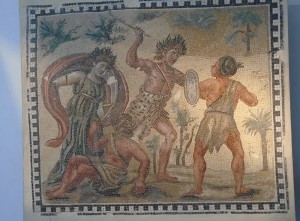 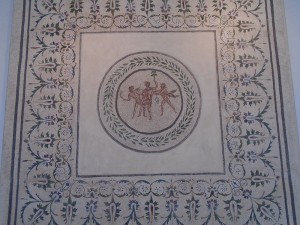 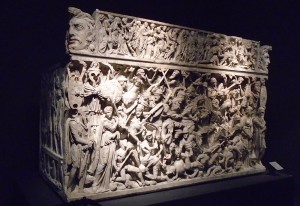 We experienced a different side of Rome on the Metro train back to the hotel in late afternoon. Jim and I stood almost between cars in the Metro. Unlike the cars on other subways, the cars connect with open passages rather than doors between them. We got on at the Termini station, which is the central point for the Metro as well as being Rome’s main train station.

One stop later, as the train halted and doors opened, the usual crowds gathered at each exit pressing to get off. Two young men who’d been part of the crowd at the door on our right, suddenly turned and dashed past us toward the door on the left. Moments later a woman screamed. I looked over and saw something dark on the floor. One of the men kicked it off the train. The first of the two jumped off the train and the screaming woman jumped off right after him. The first one got back on the train at the door where he’d stood originally but the woman stood in the doorway and refused to budge until a security officer came up.

That’s all I saw. What we were later told by people who were closer was that guy number 1 had grabbed the woman’s purse and dropped it when she screamed. (Clearly he’d chosen the wrong woman to try to rob!) He then kicked the purse off the train, whether deliberately or accidentally wasn’t clear, but it fell between the train and the platform onto the tracks.

There were a number of security people who came running and they grabbed guy number 1 off the train and onto the platform. From there it was a bit muddled. The train waited at the station for a bit and it was clear guy number 1 was protesting vigorously. Several people on the train tried to tell the police where the purse was and that another man had been involved. The doors on the train kept opening and closing and it was clear the driver wanted to get going to stay on his schedule. Guy number 2 stood not far from us, muttering under his breath. I clutched my bag tightly.

Finally the doors shut and the train took off again. People on the train muttered to themselves and each other as well. The main upshot of the conversation seemed to be that the police never listened to anyone and they didn’t do anything about the rampant criminal activity on the trains. Man number two got off himself at the next station and people sighed in relief.

We got back to the hotel, ready for a rest and then food. We had a good dinner at a wonderful little place, Insalata Ricca, recommended by Arianna, who works at the desk of the Hearth Hotel, where we’re staying. They specialized in salads served in puffed up pizza dough baskets. The place had local (their football, our soccer) games showing on the televisions and several groups of what appeared to be local people eating there. 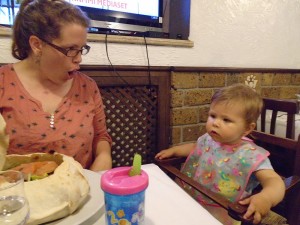 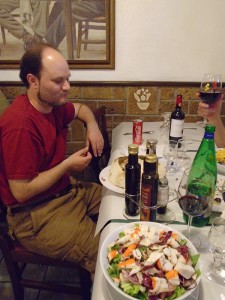 We had excellent food, good wine, lots of good conversation. It was well after dark by the time we left and headed back to the hotel.