Posted on November 3, 2014 by Karen McCullough 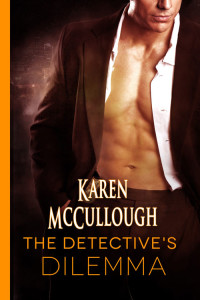 The Detective’s Dilemma releases today!  This book has had a long road behind it. I wrote it about five years ago, with a particular publisher in mind. That publisher requested the full from a query, but before they could contract it, the line’s guidelines changed and the book no longer fit them.

I then queried a number of other publishers and one indicated interest in it, but they wanted changes that would have made it a different book – not the one I’d written, so I walked away from it.

When I heard that Kensington’s Lyrical Press was looking to broaden their list, I submitted this book and got a contract offer less than a month later. They were willing to negotiate a couple of contract terms I wasn’t happy with, so we had a deal.

Last spring I was assigned an editor and we began the back and forth of three rounds of edits. It was a pretty grueling process and there were changes I wasn’t entirely happy with. But I’ve learned that editing is a give and take process that involves lots of compromises. I lean toward accepting an editor’s opinion. An outside perspective on the book sees things the author doesn’t.

Finally, a few months ago, I got the galleys for the book, which meant another check. By this time I’ve read through this book at least a dozen times and I’m excruciatingly tired of it. And even with all that I know that at least one error slipped through the cracks.

I hope many, many readers will enjoy it.

The Detective’s Dilemma is a short romantic suspense novel published in paperback and ebook by Kensington’s Lyrical Press imprint.

Blurb: Although Sarah Anne Martin admits to pulling the trigger, she swears someone forced her to kill her lover. Homicide detective Jay Christianson is skeptical, but enough ambiguous evidence exists to make her story plausible. If he gives her enough freedom, she’ll either incriminate herself or draw out the real killers. But, having been burned before, Jay doesn’t trust his own protective instincts…and his growing attraction to Sarah only complicates matters.