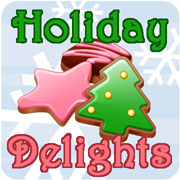 Today is National Cookie Day. Who knew? The person who organized this terrific blog hop, that’s who.

So you get a double treat, one of my favorite Christmas cookie recipes and a different sort of promo blurb for my Christmas vampire story, A VAMPIRE’S CHRISTMAS CAROL.

Directions:
1. Sift flour with salt and cinnamon.
2. In large bowl, beat butter, sugars and egg until light and fluffy
3. Gradually add flour mixture, stirring until smooth and well combined
4. Form dough into a ball. Wrap in waxed paper. Refrigerate one hour (no more).
5. Divide dough into 4 parts. Refrigerate until ready to roll out
6. Preheat oven to 375F. Make topping.
7. On lightly floured surface, roll dough, one part at a time, into a 9×7-inch rectangle. With floured knife or pastry wheel, cut into 16 rectangles.
8. Using greased spatula, place 1 ½ inches apart on ungreased cookie sheets. Brush top of cookies with egg mixture; then sprinkle with sugar mixture.
9. Bake 10 to 12 minutes or until set and golden brown. Remove to wire rack. Cool.

1. In small bowl, combine milk and egg.
2. In another small bowl combine sugar and cinnamon

Scroll down below to the links to other participating authors for more scrumptious recipes.

And now for the Story Promo – I wrote this for Tina Donahue’s blog, but I like it so much I’m reposting it here:

A Meeting with the Vampire on Christmas Eve

Twas the night before Christmas and all through hall
The vampire was ready for his last night of all.
A hundred years gone and the urge to drink blood
He’d struggled against and so far withstood.
When out on the porch there arose such a clatter
He trudged to the door to see what was the matter
When what to his wondering eyes should appear
But a young woman shivering with cold and fear.
Her face it was lovely and her blood warm and sweet
To him, she was temptation, from her head to her feet.
Ignoring the warning that his presence meant danger
She opted for shelter and passed time with the stranger.
Memories of Christmases long gone they traded
Gifts and feasts and treasures now faded,
The terrible night, a century ago,
When a vampire stole his life and his hope.
As he suffered the death throes of blood-hunger pollution,
She struggled to help him and find a solution.
When an enemy terrible showed up to gloat
He tries to make Carol a sacrificial goat.
She’s no willing victim and fights for her life
And to help Michael get through a night of strife.

For more cookie recipes, visit these sites of other participating authors: