Posted on December 12, 2019 by Karen McCullough

A couple of months ago, I ventured to South Bend, Indiana, where I was visiting my daughter, Sarah, her husband, Ian, and their four boys: Liam, Cassian, Henry, and Freddie. The oldest boy is 8; the youngest is 2. 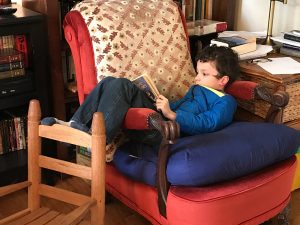 And I’m proud to say that they all love reading. Only the oldest one actually reads on his own, but he basically taught himself at age three. He’d read all of Winnie-the-Pooh by the time he was four. The six-year-old and four-year-old are both learning to read now.

But they all love stories and encountering new things. Whenever I visit, I try to bring some new books for them and they’re always eager for them. And it’s clear that one of grandma’s primary roles, as far as they’re concerned, is to read to them. In fact, any time I sit down, it’s all but guaranteed one or more of them will approach with a book. 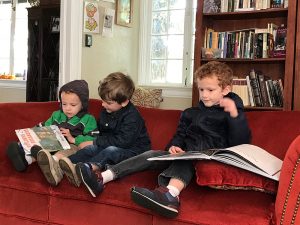 While they have favorites, pretty much any reading material aimed at kids will do. We can go from Where the Wild Things Are to Science Concepts for Kids to Night Night Construction Site to the Sesame Street Alphabet Book. It’s all good.

The two-year-old is insatiable. He’ll beg for book after book, grabbing them off the shelf one after another. When I say “enough,” he’ll give me the big-eyes, how-can-you-say-no-to-this? look. And I melt. We’ll read yet another Sandra Boynton book, maybe Dinosaur Dance or Happy Hippo, Angry Duck. And we’re both content.

This entry was posted in Books, Family and tagged Books, grandchildren, reading. Bookmark the permalink.