The island of Santorini is one of the most photographed places in the world and one of the most recognizable. Less well-known is the fact that, long ago, the volcanic island known at the time as Thera was once much larger and held the second largest settlement of the ancient Minoan culture. 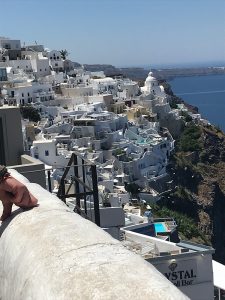 Fira is the largest city on the isl

The Minoans had a sophisticated, advanced culture more three thousand years ago. Then, sometime around 1500 BC, the volcano erupted, taking out a large section of the island and burying the ancient cities under as much as sixty feet of ash and volcanic rock. Historians believe that event brought the downfall of the Minoan culture and likely sparked many of the legends of the lost world of Atlantis.

We got up way early (like 4:00 am) to get a cab scheduled for 4:45. Our cab driver, on hearing we were Americans and hadn’t yet seen the American Embassy, decided to take us past it on the way. He seemed sort of proud to show it to us and tell us it was the largest embassy in Athens. In the pre-dawn darkness I could see it was large and sprawling and had a formidable wall surrounding it. Even with the slight detour, we got to the airport in plenty of time to make our mercifully uneventful 7 am flight. 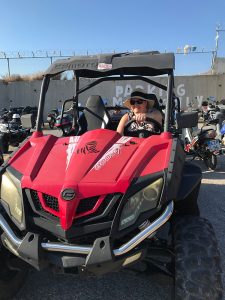 On arrival on the island of Santorini, the first order of business was picking up the buggies we’d arranged to rent for the duration of our stay. A representative of the rental agency met us at the airport where they’d been brought. After completing the paperwork and a few quick lessons in how they functioned, we were off. We headed for Fira, the largest city on the island where we had a pleasant, relaxed brunch in the Pelican Kipos restaurant.

Refreshed and full, we walked up to the walkway along the top of the town of Fira. We also poked into a number of side streets, stopping to shop at some of the little tourist shops, and gape at the gorgeous blue water in the caldera below and take pictures of the incredibly beautiful town. All the white-washed hotels, restaurants, and residences built into the side of the cliffs intersperse with the numerous blue-domed churches and their multi-belled steeples. 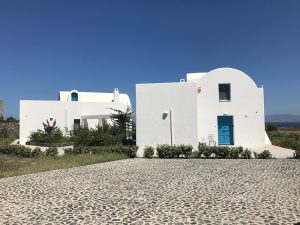 Our Airbnb. The flat part is a roof-top deck where we had a couple of picnics.

In the early afternoon we headed to the AirBnB to drop our bags and settle in. Then we changed into bathing suits and headed for a pool/bar on the top level of Oia, where we enjoyed a refreshing swim, lovely drinks and snacks, and enjoyed our first spectacular Santorini sunset. As the sun goes down over the waters of the caldera, the glow spreads across the water and small islands, finally filling the sky with the brilliant yellow glow that reflects beautifully on the white-washed buildings. It ends with the sun blazing into a red fireball as it slowly sinks below the horizon. People actually applaud the sunset here.

Following that, we took a walk through Oia, then climbed down a long, long (very long) series of steps down to a water-front restaurant. The stairs were challenging, being steep, uneven cobbled steps that featured rough, slippery rocks and random holes. Sometimes there was a low side wall to help but often you were on your own. And then, as if that weren’t challenging enough, piles of donkey poop started to show up. And it got darker. It felt like a huge accomplishment to make it to the bottom.

We had reservations for dinner at nine-thirty and got there a few minutes early. (Late dinnertime for Americans, but not unusual for Greeks.) We soon discovered that Greeks are in no hurry when it comes to meals. To be fair, the restaurant was crowded and possibly under-staffed. But it took a long time for anyone to take our orders, then longer for food to arrive, with some people getting their dinners well before others, and a very long time after we asked for the check for it to arrive and the bills to be settled.

The food, however, was good, if somewhat unexpected in at least one case. I and one other member of our party ordered the “small fish filets.” What I expected was this: 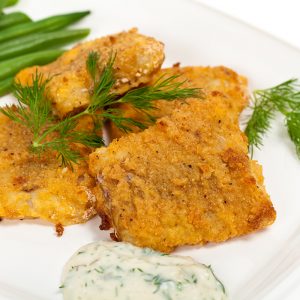 What I got instead was this: 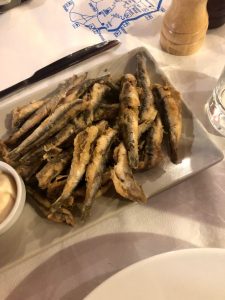 Everyone at the table was stunned and incredulous. They were actually quite tasty although a bit more than I could eat.

The restaurant owner called a taxi for us that took us back up to the top. We couldn’t face trying to go back up those steps in the dark.

Random Observations:
– You can’t escape the realization that you’re on the rim of a volcano as you look down the curving cliffs that drop steeply all the way to the water.
– Santorini’s distinctive architectural style of white-washed concrete buildings with vaulted roofs is a large part of its charm.
– Buggies and ATVs are the way to go on Santorini, which is a small island with narrow roads and insufficient parking for the most popular destinations. 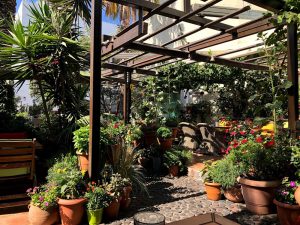 Interior of the Pelican Kipos Inn (actually it was outside but the area was covered.) 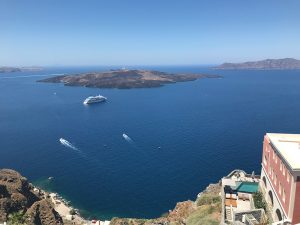 The bay that was the caldera of the volcano. The water is some of the bluest I’ve ever seen.

Steps up to the top of the town of Fira 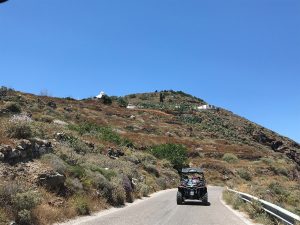 Landscape of the island 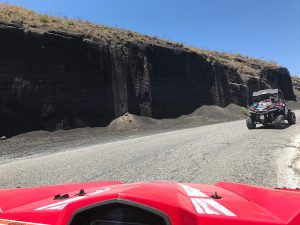 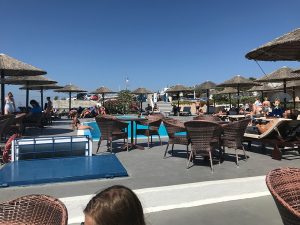 The pool bar where watched the sunset the first night 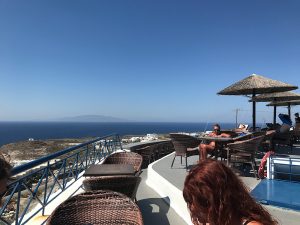 Looking out over the water from the pool bar 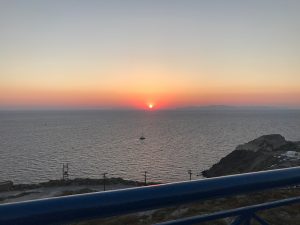 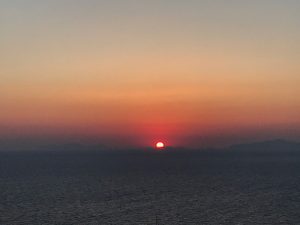 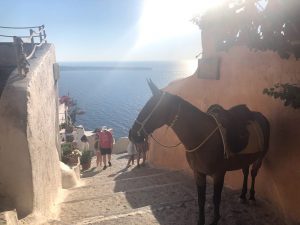 Donkey. They didn’t carry people down, just up, so this one had probably already brought his passenger to the top.

This entry was posted in Travel and tagged Greece, Landscape, Santorini, Sea, Sunsets. Bookmark the permalink.