We booked a day trip to Delphi before we left the Sates, and I’m so glad that we did. It’s a 2 ½ hour drive each way from Athens but totally worth the effort. (Not that there was much. We were taken in an air-conditioned and pretty plushy coach to the site.) The day was very hot and there’s very little shade, plus you have to do some uphill climb to get to it, so I probably didn’t get to appreciate it as much as I might have in milder weather, but I wouldn’t have missed the experience. 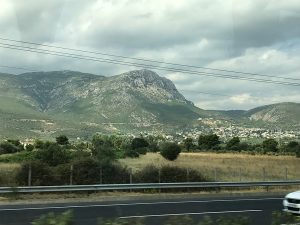 The rugged countryside of Greec

We left Athens around 9 after a bit of confusion with some people on the wrong bus. I’m pleased to report it wasn’t us!

The trip to Delphi takes you through some of Greece’s amazing countryside, and deep into the mountains. You go around and up Mount Parnassus to get to the archaeological site, passing through the nearby town of Arachova, a ski resort frequented by some of the glitterati of Europe.

A spectacular museum just below the ruins displays much of the recovered statuary belonging to the remains of the shrines at Delphi as well as architectural bits like friezes and columns. Highlights include the sphynx of Naxios, the dancing maidens, much of the frieze from one of the treasury buildings, and the most iconic piece, the bronze Charioteer. Although at one time where were many bronze statues, few remain from the classical period, as most were melted down and reformed. Only four large-scale statues remain. The charioteer was preserved (ironically) by being buried in debris from an earthquake. The rest were all recovered from shipwrecks. 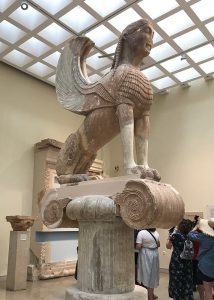 The site was buried under mounds of dirt and rock by several earthquakes during the years after the Roman Empire fell and the old Greek ways faded. Excavations by French archaeologists began around 1950 and a lot of statuary and architectural bits were found in process. Restoration has been done on a few things, a lot of pieces were moved to the museum to preserver them, and others have been left just as they were found.

Following the tour of the museum, we walked up a long, winding path that follows the route pilgrims would traditionally have taken to bring offerings and consult the famous Oracle of Delphi. The path winds past many small shrines and temples to various deities, what are presumed to be storehouses for the riches that were offered there, and broken bits just left in situ, leading up to the centerpiece temple of Apollo where the Oracle prophesied. Not a lot of the original structure remains, but it’s enough to suggest just how grand a place it must have been in its heyday. The history of the site is complicated. You can read about it here: 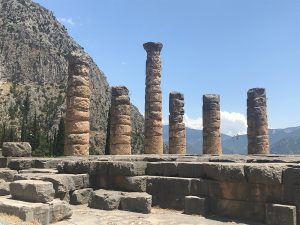 Columns that mark where the centerpiece Temple of Apollo once stood.

My own reactions include the kind of awed wonder that most grand-scale architecture inspires. Photographs can’t capture the impact of the massive stones and enormous columns, the intricacy of the carvings and the complicated stories and history it all represents. Curiosity too, because archaeology has always held a lot of appeal for me, trying to tease out the mysteries of ancient people and places through the artifacts they leave.

We spent about an hour in the museum and then another hour and a half at the site, then they took us to a nearby restaurant for lunch. Exhausted and replete, I’m pretty sure I wasn’t the only one who took a long nap on the way back to Athens.

Afterward we met up with the rest of our party for a wonderful dinner at a rooftop bar/restaurant which had a glorious view of the Acropolis. We got to watch the lights come on as darkness fell, then made our way back to hotel after a long but rewarding day. 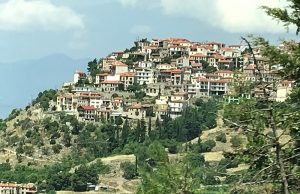 The town of Arachova sits on a shoulder of Mount Parnassus near Delphi. 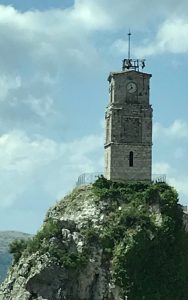 Clock tower of the town of Arachova 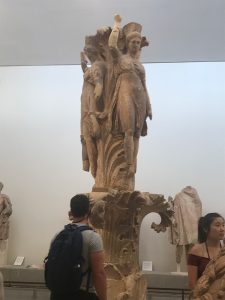 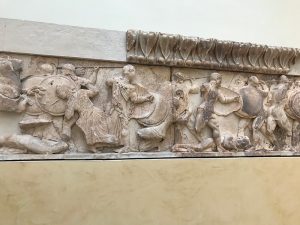 Detail from frieze that once decorated one of the treasury buildings. 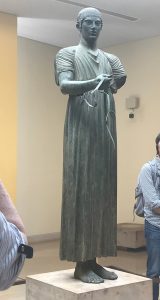 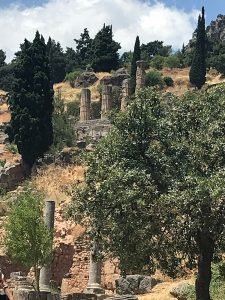 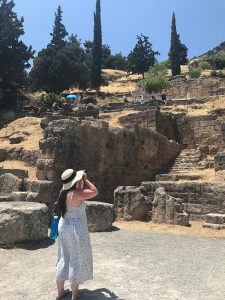 Selfie with Liz in front of the restored Athens Treasury building 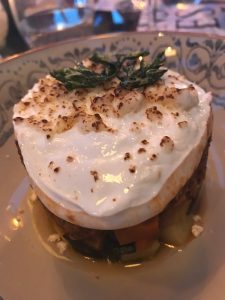 I had this for dinner and it was delicious – Moussakas with beef cheeks, yoghurt, goat cheese and vegetable Ratatouille. 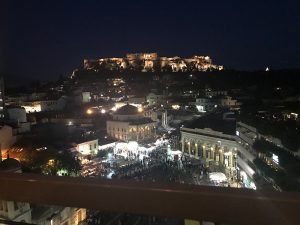 View of the Acropolis lit up at night, from the restaurant.

This entry was posted in Travel and tagged Delphi, Greece. Bookmark the permalink.