We had a much slower start this morning. Realized the lack of sleep on the plane had caught up with us, though we both went to bed early and slept late. It was almost nine when we woke which is highly unusual for both of us. But obviously we needed it. Had a leisurely breakfast, walked to Monastiraki Square where we took the Hop On-Hop Off but to the Plaka area next to the Acropolis Museum. We walked a bit and shopped for souvenirs.

Then we got on the HOHO bus again and headed for the National Archaeological museum. We started with lunch there, spanakopita for me, ham and cheese pie for Liz and big glasses of fresh squeezed orange juice on the side. Fortified we set forth into the museum, and emerged about three hours later with our heads stuffed full of new information about antiquities. I learned so much and found most of it fascinating. Perhaps the most amazing realization is how sophisticated some of those ancient Cycladic, Minoan, and Micenaean (proto-Greek) cultures were. I think this is going to require another blog post itself.

Out of the museum we grabbed the HOHO bus again. Being a bit brain-fogged and slow-moving, we managed to miss getting off the stop near our hotel, so we ended up doing the whole circuit again. But this time we sat upstairs and were able to get some much better pictures. It also gave us a chance to rest our feet during a pleasant tour of historic Athens.

Got off at the stop near our hotel this time, did a bit more shopping and had dinner at one of the many, many little hole-in-the-wall restaurants with outdoor seating lining the street. I was still feeling full from lunch so went light with a plate of dolmadakias (grape leaves stuffed with rice) and Liz had a plate of mutton in red sauce. I helped her eat a bit of it since it was HUGE. It was also delicious. And so inexpensive it felt as though we were ripping them off. I know Europeans don’t expect tips, but we left one anyway just to salve our consciences.

Walked back to the hotel and went up to the rooftop lounge to get pictures of the Acropolis lit up at night.

Random Observation 1: The food here is almost ridiculously cheap. Admittedly we’re not eating in really high end restaurants, but even in the Museum café we paid far less than I would’ve expected.

Random Observation 2: Perhaps the hardest thing to get used to here has been not dropping toilet paper into the toilet. The sewage system cannot handle it so even used toilet paper goes in the bin. Kind of gross and goes against a lifetime’s habit of dropping it in.

Random Observation 3: Athens is an extraordinary mix of beautiful new buildings, nicely and semi-nicely maintained older buildings, and structures that are totally falling apart. They occur right next to each. 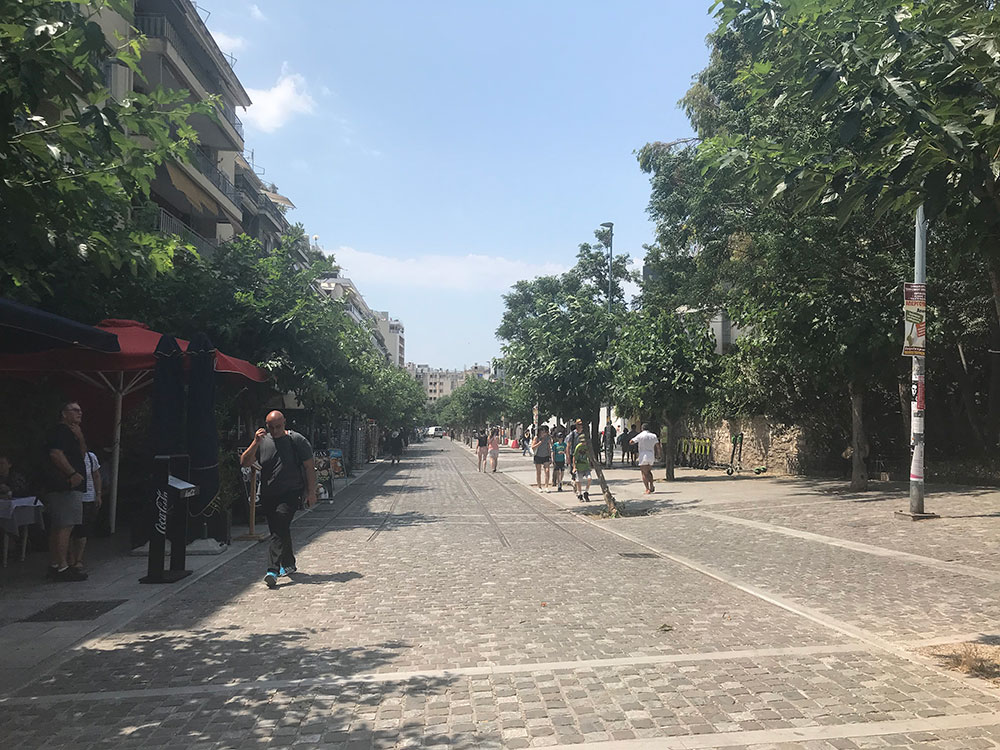 A Street in the Plaka 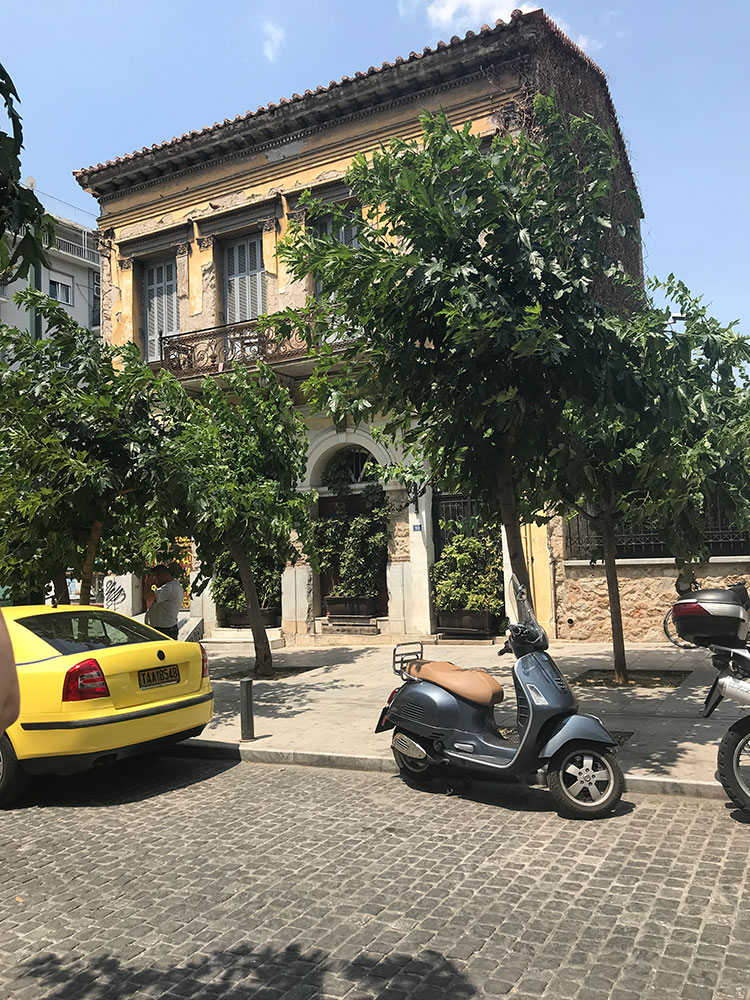 Random building in the Plaka area 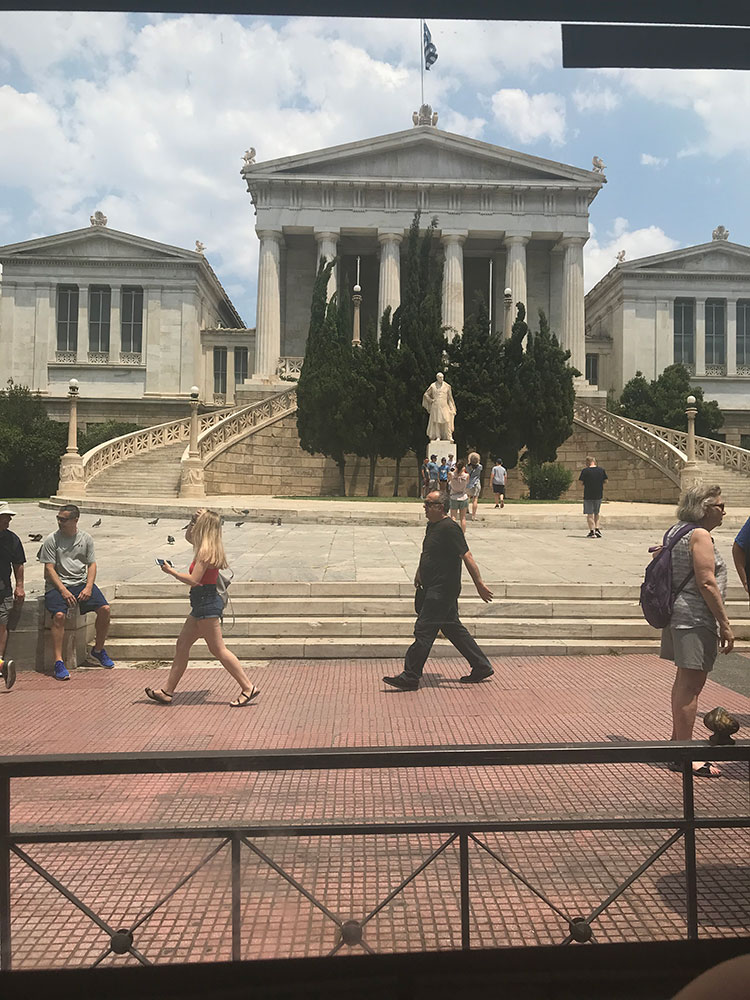 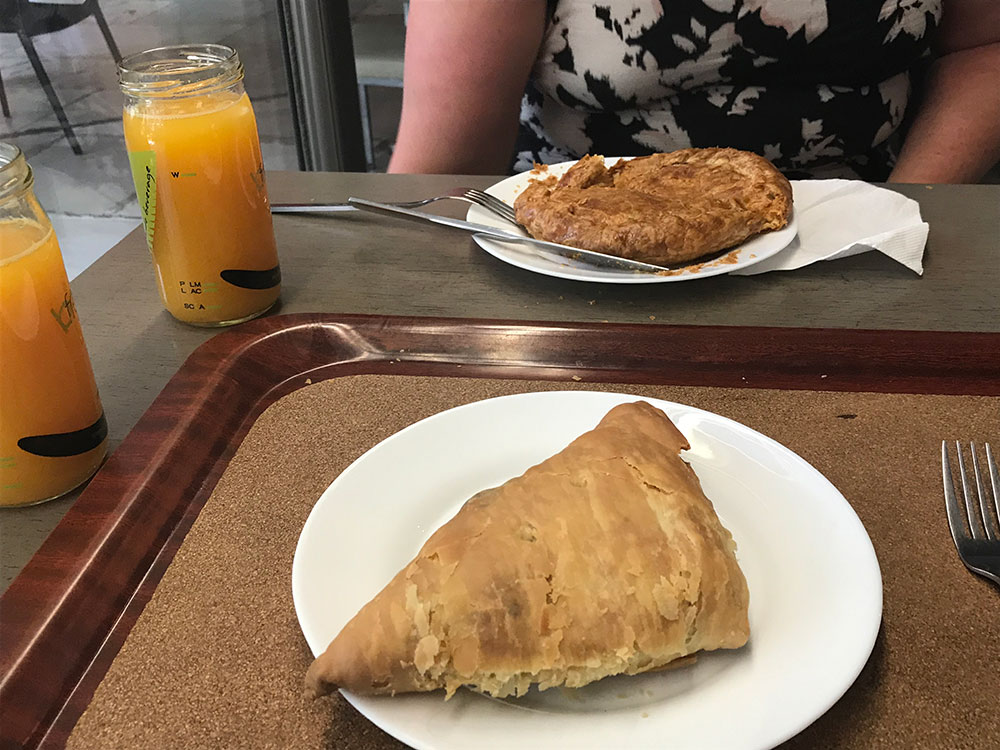 Lunch at the Museum, Spanakopita for me, Ham and Cheese pie for Liz and fresh squeezed orange juice for both us. Delicious! 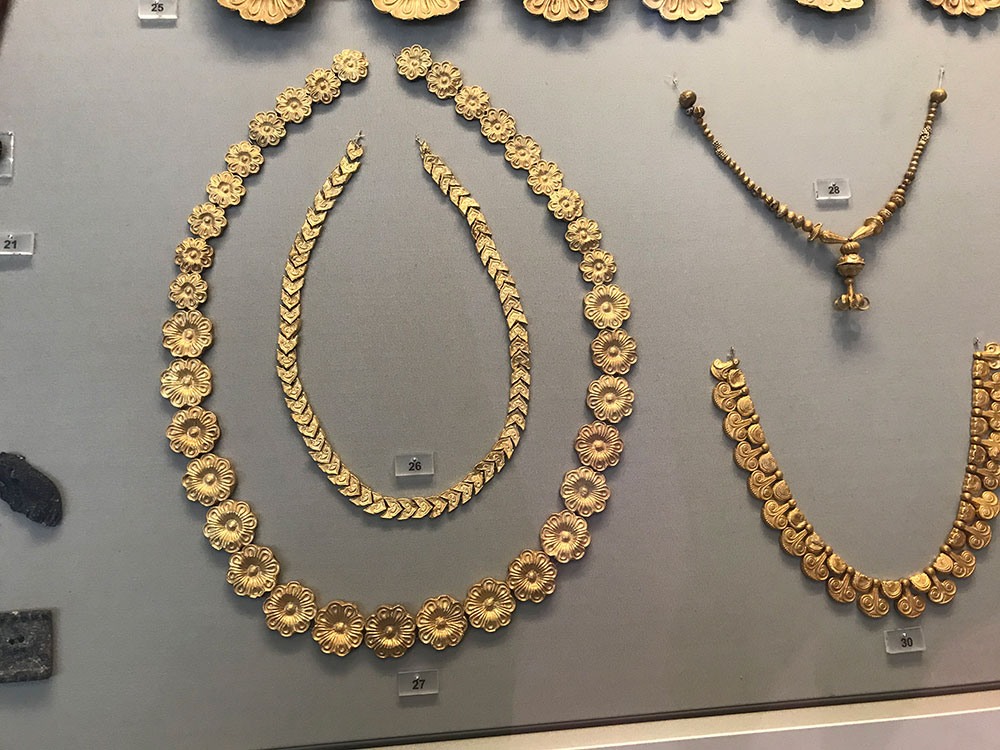 Amazing gold jewelry in the National Archaeological Museum. It’s hard to believe this is more than 3,000 years old.

Minoan statue of a girl 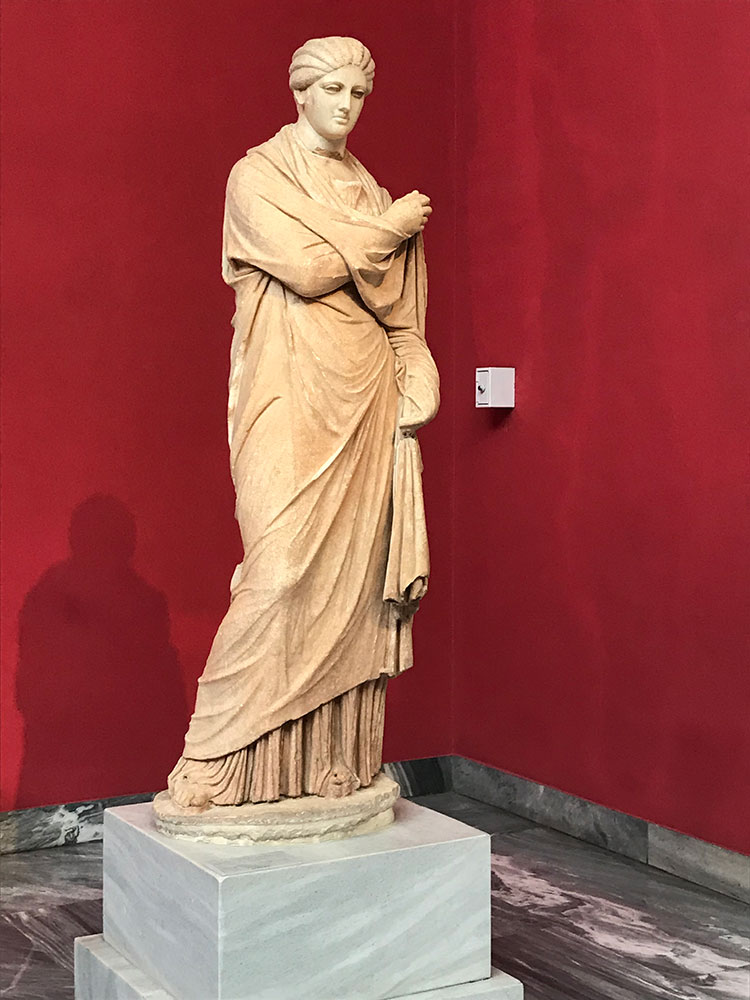 Classical period statue of a woman 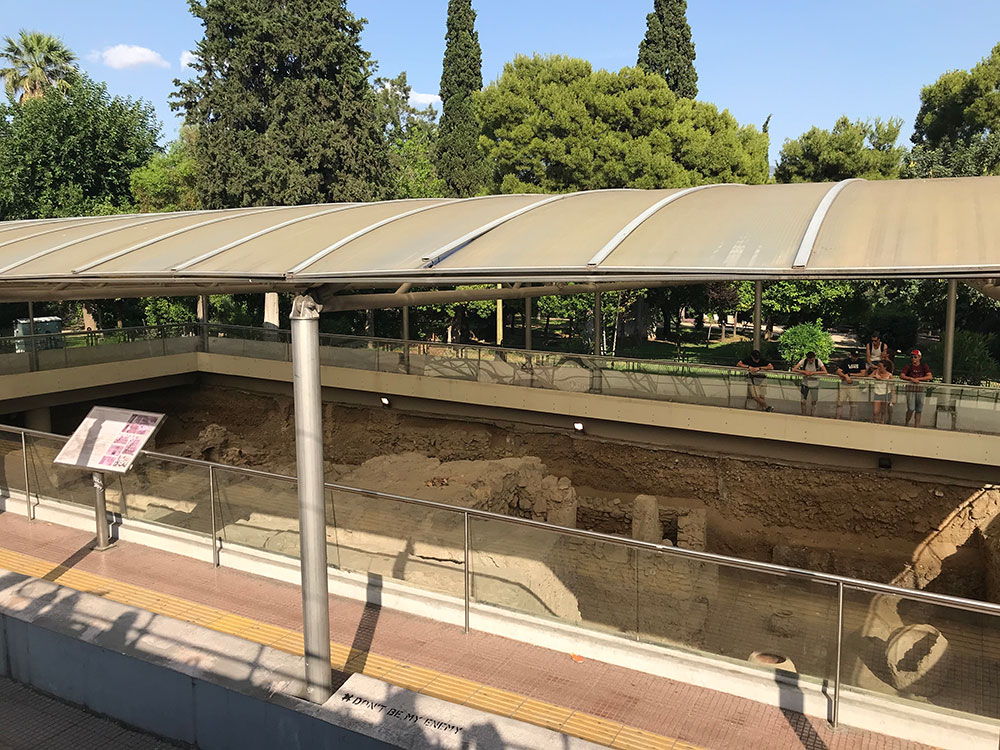 An excavation site right by the side of the highway. 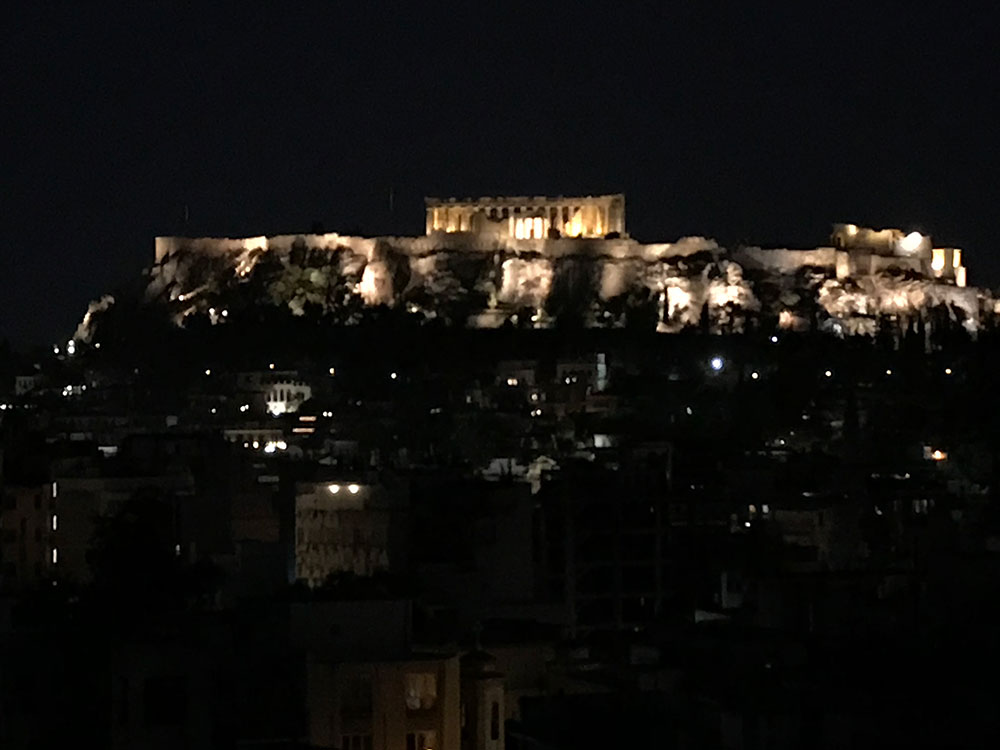 The Acropolis lit up at night, from the roof deck lounge of our hotel