From Glasgow to The Lake District, England

Posted on September 25, 2019 by Karen McCullough 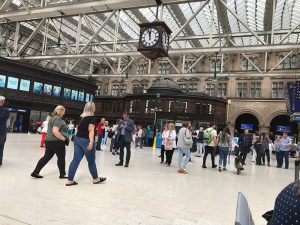 In this case getting there was half the fun.

After a leisurely breakfast, we packed up, checked out, and headed across the street from our hotel to the Glasgow Central Train Station. It’s a busy confusing, station, with trains coming and going constantly on 16 different tracks. After a bit of initial wait and confusion, we found the right platform and boarded the train for Penrith, the station nearest the northern part of the Lake District in England.
The journey was easy and pleasant, taking a bit over an hour and a half, rolling through some very scenic countryside. We got off the train at Penrith and from there took a bus to Keswick. 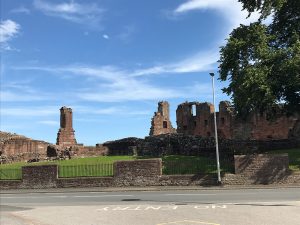 For an American, it was a delightful surprise to emerge from the train station at Penrith to the sight of a ruined castle right across the street. There’s not much left of it other than a few crumbling walls, but the grounds have been turned into a park. On that beautiful day, a number of children (plus a few adults) scrambled up and down one of the uneven walls.

The bus ride to Keswick was equally interesting. The bus was a large two-level monster and many of the roads in the area are little more than paved horse trails. Watching the bus maneuver through streets I didn’t think it could possibly fit was an experience in itself. As was riding on the top deck and having branches from the trees at the side of the road banging against the windows. Every time the bus had to make a turn I was sure this would be the time it wouldn’t manage to get around the corner. Because not only are the roads single-car narrow, most buildings are very close to the street. 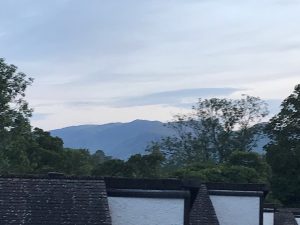 View from the balcony.

But we got to Keswick (somehow!) and our son met us at the bus station (which is actually just a side road in front of Booths, the larger of two grocery stores in town). We walked the half mile or so to the vacation cottage and arrived to the enthusiastic greetings of our daughter-in-law and two grandchildren, Freya, who is five, and James, three. They had set out early that morning from their home in Hythe, Kent, and driven to Keswick, arriving there a couple of hours before we did. 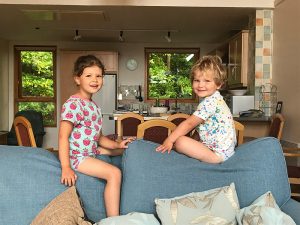 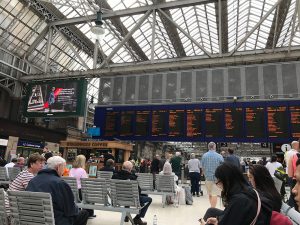 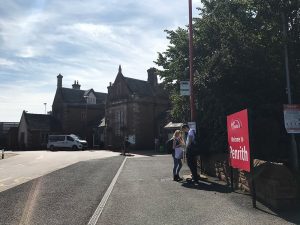 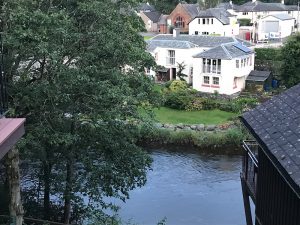 One side of the balcony looked out over the River Greta

The vacation cottage was lovely, including a wall of windows that looked out on one of the many mountains in the area and a veranda that overlooked (on one side) the river that runs through the town.

We had a great time that evening eating pizza and catching up with the family before retiring.