Florence Day 2 – The Uffizi Gallery and the Duomo

We had reservations for the Uffizi Gallery the next day at eight fifteen and we spent an entire morning there. I only wish it could have been longer. There’s so much more magnificent art than I could manage to take in. We certainly didn’t see all we wanted to see, though we did get a glance at the major works, Botticelli’s Birth of Venus and his The Spring, Leonardo’s Annunciation, Michelangelo’s only easel painting, as well as others too numerous to name. 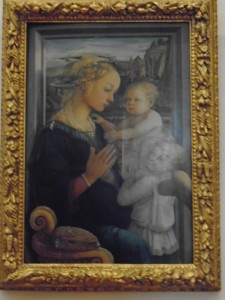 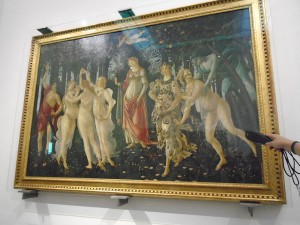 The Madonna and Child above and this painting, Spring, are both by Botticelli.

I’ve loved painting ever since I took a required Art History class in college. Fortunately my husband shares that interest, and we take every opportunity we can get to see as much as we can. 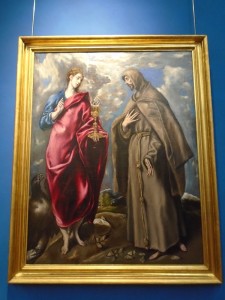 There’s more than just Italian art in the Uffizi. This is an El Greco.

I hate, hate, hate that after four hours my feet and my brain had had all they could handle because there were still many rooms of paintings left to go.  There was so much more to see.  It half killed me that as we were heading for the exit I barely glanced at a wonderful collection of Titians. I walked right by a group of Caravaggios. I couldn’t take in paintings that I would otherwise drive miles just to have the opportunity to see one of them. 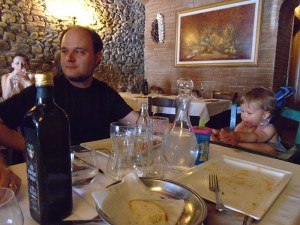 After a rest and lunch, our next jaunt was to view the interior of the cathedral. The line was fairly long, though not as long as most of the lines in Rome, but it moved quickly. The inside was a bit of a surprise. All the extravagant decoration is on the outside. Aside from the inside of the dome, which is beautifully painted, the rest of cathedral is rather plain, other than a few paintings and frescoes. Which doesn’t mean it was unattractive. In fact being less ornate made its graceful lines and proportions more obvious and pleasing. 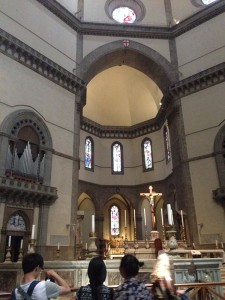 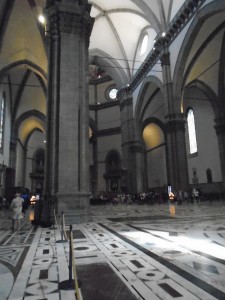 It did have a couple of interesting features beside the dome, though. Over the entrance to the church, there is an unusual twenty-four hour clock, which, sadly, didn’t seem to be running. It also has the prettiest votive candle holders I’ve ever seen. 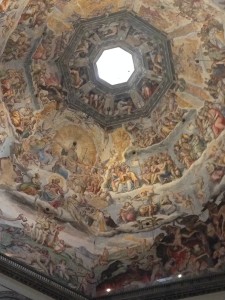 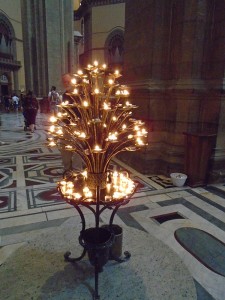 We went back to hotel again afterward. Joe wasn’t feeling great and the baby needed an earlier night so Jim and I ventured out on our own. We passed the Palazzo Vecchio and walked across the Ponte Vecchio, which is lined on either side with really expensive jewelry shops, up to the Pitti Palace, then around and back across the river by a different route. 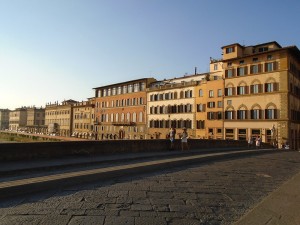 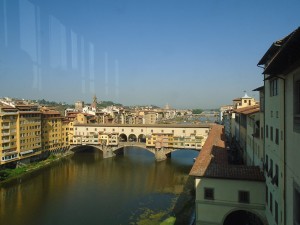 The Ponte Vecchio as seen from the Uffizi.

Following that we had a nice, leisurely dinner in the Piazza della Signoria, next to the Palazzo Vecchio.  It was one of the touristy, open-air restaurants on the plaza itself, but the food and wine were good and there was something amazing about just sitting and soaking in the ambience of a small city which had been at the center of the Italian Renaissance and home to many of the most important artists and writers of the period.