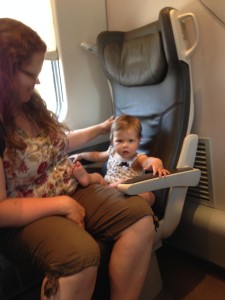 We got the high speed train from Rome in the morning and an hour and a half later we were in Florence. Our hotel there was just a few blocks from the train station, so we walked to it. Hotel Perseo occupies the third and fourth floors of a former convent a short way from the famous cathedral. A tiny lift in the center of the building took us up to the third floor registration area. We had nice rooms on the fourth floor of an old building extensively refurbished.

Once we’d dumped our bags and freshened up, we set out for a walk around the city. The hotel was just yards from the cathedral, so that was the first stop. It’s an astonishing building, so we spent some time walking around it and, frankly, gawking. 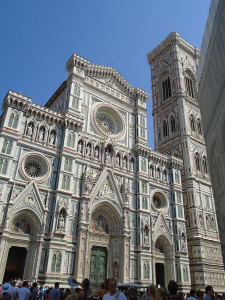 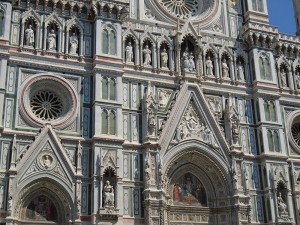 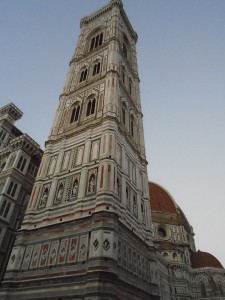 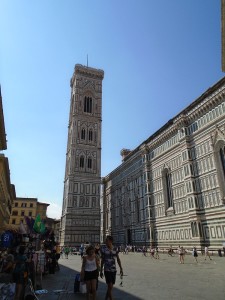 From there we proceeded to investigate other places in the area, finding our way through very narrow streets lined with stores selling expensive brand name goods – Gucci, Fendi, Armani, and Balenciaga, among others. We passed the Plaza de la Republica with its broad piazza and carousel and arrived at the Palazzo Vecchio. 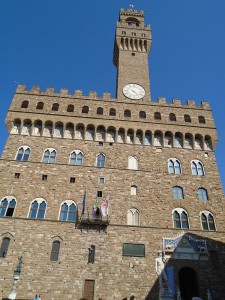 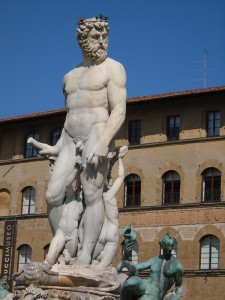 The Palazzo is a huge building that was once the palace of the Medicis, but became the town hall of Florence when they moved out to Palazzo Pitti, across the river.  It looms over the Piazza della Signoria with its loggia full of statuary, some original and some copies. The originals include the Rape of the Sabine Women and Perseus with the head of Medusa.

Most impressive, though, are the huge Neptune statue and fountain and the replica of Michelangelo’s David. The original David stood there until the middle of the 19th century, when it was moved to the Accademia Gallery to preserve it from exposure to the elements.

Just beyond the Palazzo Vecchio is the Uffizi Gallery.  More about the museums in the next post. 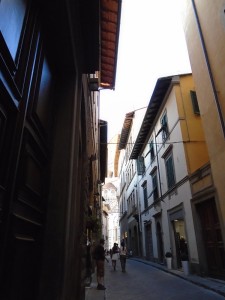 Narrow Florentine street near the cathedral. 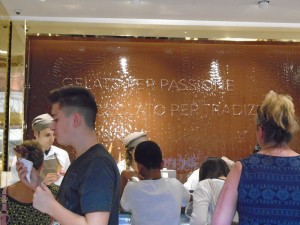 That’s a chocolate waterfall behind the counter at this gelateria.