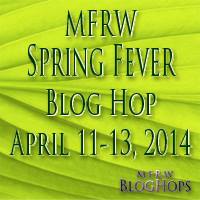 First of all, this is the MRFW Spring Blog Hop Post.  Read to the end for prize instructions.

Because the events of the book happen in late spring, I decided to feature my romantic suspense novel, A QUESTION OF FIRE for this hop.

The heroine of A QUESTION OF FIRE is a newspaper reporter with an off-beat sense of humor, a passionate thirst for justice, and a rather large problem.

Most of it springs from incident number 1:

1. At a party where she’s filling in for the social pages editor, Cathy takes a break in the garden and is accosted by a young man trying to get a message to another party-goer. Before she can make up her mind whether to run, scream, or do as he asks, the young man is shot and dies in her arms. He leaves her with a part of a message that makes no sense to her.

Which leads to number 2:

2. The shooter knows that the victim told her something, and he VERY much wants to know what. So his henchman kidnap her to try to get it from her. Fortunately she’s rescued before they can do anything too nasty to her.

3. In the course of the investigation into where a certain piece of evidence is hidden, she gets to help search a junkyard full of old appliances in the middle of a hot day… And those appliances are, in some cases, already occupied by critters most people prefer not to meet unless they’re armed with a large can of bug spray.

4. As a result of number three, she actually shares a lovely kiss and some quality time with a man she’s falling in love with… But then there are more adventures, frustrations, fights, and rescues.

5. They and the victim’s younger brother get stranded in a lonely section of mountains, are chased by the killers, and almost driven off perilous mountain roads when they hitch a ride with a nice elderly couple.

Then: they defeat the villains and find the missing evidence.  (Can’t get too specific about how all that happens, though.)

Blurb for A QUESTION OF FIRE:

When Cathy Bennett agrees to attend an important party as a favor for her boss, she knows she won’t enjoy it. But she doesn’t expect to end up holding a dying man in her arms and becoming the recipient of his last message. Bobby Stark has evidence that will prove his younger brother has been framed for arson and murder. He wants that evidence to get to his brother’s lawyer, and he tries to tell Cathy where he’s hidden it. But he dies before he can give her more than a cryptic piece of the location.

The man who killed Bobby saw him talking to her and assumes she knows where the evidence is hidden. He wants it back and he’ll do whatever it takes to get it, including following her and trying to kidnap her.

Cathy enlists the aid of attorney Peter Lowell and Danny Stark, Bobby’s prickly, difficult younger brother, as well as a handsome private detective to help her find the evidence before the killers do.