We’re long-time baseball fans who recently took a road trip to Atlanta to take in a couple of Braves games. It rained. The entire time. Or almost the entire time. There were a couple of intervals of a few hours when it mostly quit.

The drive from our home in North Carolina to Atlanta was marked first by construction along I-85 that extended for probably 80% of the route, followed by increasingly heavy rain as we made our way into Georgia. It was coming down in torrents by the time we approached the city. Finding your way around Atlanta isn’t fun under ideal conditions. With visibility at about five feet in front of us, we had a long stretch of white-knuckle time. 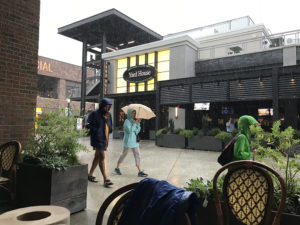 The Battery with fans walking toward the stadium.

Mercifully we made it to our hotel without scratch or dent and only an hour or so later than we’d anticipated. We still had enough time to check in, get settled, and debate the likelihood that the first Braves’ game we had tickets for that night would actually happen. After consultation with weather maps and other online crystal balls, we put the odds in the unlikely zone, but we headed over to the ballpark anyway.

Our hotel was right across the street from the Battery area which made it an easy if rather damp walk. The new Battery area next to SunTrust Park is an intriguing place, though climactic conditions inhibited our desire to explore. We were seriously hungry, however, and ducked into a pizza place for food and shelter. That was the first nice surprise of the day. The Pizza Margherita was excellent, reminding us strongly of the dish of the same name we’d had a couple of times in Italy. The wine was also quite good. We ate outside on a covered porch, watching streams of fans approach the ballpark, protected by umbrellas and rain slickers.

Eventually we finished up and joined them. 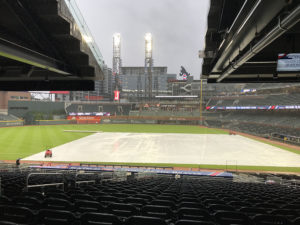 This is how the park looked as we entered from the right field gate.

Half an hour before the original scheduled start time, it was clear the game would not get underway at seven-thirty. The tarp was still on the field and rain poured down. The weather map I consulted on my phone did offer rays of hope in the form of a small break in the rain that appeared to be approaching. We hung around the park with several thousand other people, checking out the various shops, food stands, and the Brave’s Hall of Fame. (More on that later.)

Eventually more signs of hope emerged. The rain lightened. Ground crews came out and began sweeping water off the tarp. By eight, the rain had abated and the crew began earnestly getting the field ready. It was actually pretty interesting watching how they maneuvered the huge, bulky tarp and then put down the lines for the games. At eight-thirty they announced the first pitch would take place at nine.

And it did! The rain didn’t stop entirely but it settled down into a heavy drizzle that might not have been fun for players but did allow the game to be played. 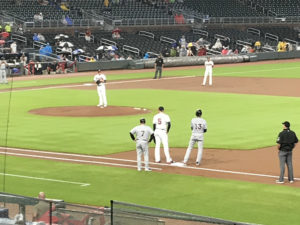 They played a great game! Number 5 is Freddie Freeman playing first base.

By sheer beginner’s luck, we had seats that were close to the field, but just under the overhang from the deck above. It was a great game, too. Playing the hapless Miami Marlins, the Braves won 11 – 6 in a game that featured a novice pitcher making his (very good) big league debut for the home team, and a lot of hitting by them as well. The Braves slammed 19 hits, including three home runs. All that action made it a thoroughly enjoyable game for the crowd watching.

The next morning we had tickets for the 10:30 a.m. tour of SunTrust Park. Although it was raining heavily again when we got up, by the time we set out, it had mostly stopped. At $20 per person, the tour sounds expensive, but it was worth every penny. We got to see a lot of places the public doesn’t generally get to go, the press box, private suites, 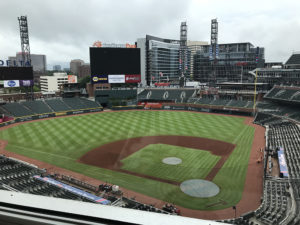 View of the field from the press box!

several private lounge areas, the utility tunnel, and finally out onto the field (Stay on the warning track, we were warned. Do NOT step on the grass!) and into the home team dugout, with visits to the Braves’ Hall of Fame, the Henry Aaron lounge, and the ChopHouse along the way as well. (HINT: If it’s a game day, go in the morning. They don’t do the field and dugout visits in the afternoons of game days.)

We had lunch and did a bit more exploration of the Battery area and a few shops until the rain started in earnest again. We retreated to the hotel for a rest until closer to time for that evening’s game. By an hour before the scheduled start time it was still raining in torrents. We had a good meal in the ChopHouse, watching the rain fall on the field, spent time revisiting the Braves’ Hall of Fame, stopping for a drink, wandering the concourses, and watching some of the entertainment there, until, at nine o’clock, they finally announced the game would have to be postponed. 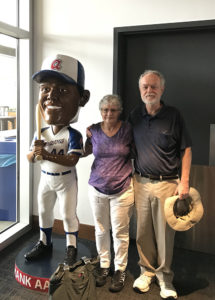 The Braves’ Hall of Fame is built into part of the stadium and is very nicely done with multiple displays covering the team’s history. Of course, the centerpiece of the whole thing is their most legendary player and an undoubted baseball treasure, Henry “Hank” Aaron, the man who broke Babe Ruth’s career home run record. (He is still an employee of the organization, by the way.)

Personal Trivia Note: We made a foray to Atlanta many years ago, (mid 1970s — so it was many, many years ago!) and were good fortunate to be present when Hank Aaron hit home run number 699. 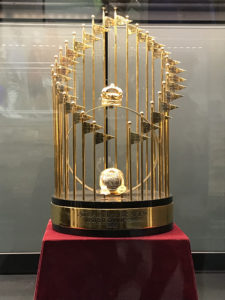 We’ve been Braves fans for a long time, so it was fun to see pictures of players from the 80s and the incredible group responsible for the run of ten consecutive (or something like that) National League Championships. We also had the privilege of seeing Greg Maddux pitch in the late 1990s, a two-hour and 40-minute game where he gave up one hit and the Braves won 1-0. We agonized over several World Series and rejoice when they won in 1995. It was wonderful to see the actual World Series trophy on display there, along with so many other artifacts from the Braves’ storied franchise history.

The next morning we headed back to North Carolina, once again negotiating the highways around Atlanta in the pouring rain. Even though we didn’t get the second ball game we’d hoped for it, we still voted the trip worth the effort. 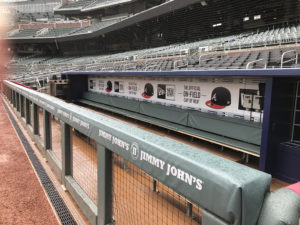 The home team dugout! We got to sit on the bench where players and coaches sit during a game.

This entry was posted in Uncategorized and tagged Atlanta, baseball, road trip, Vacation. Bookmark the permalink.