A Visit to Greece Day 1 in Athens

My daughter Elizabeth and I headed for Athens, Greece, on Sunday morning, flying from Raleigh-Durham airport to Philadelphia and then on to Athens from there. The trip was remarkably hassle-free for a ten-hour flight across the ocean. The flights were all on time so we didn’t worry about missed connections.  We arrived right about when we were supposed to arrive. The only issue is that neither of us managed to get much sleep on the plane, so we arrived feeling a bit bedraggled.

But we know better than to try to nap. Beating jet lag is easier if you can power through that first day and stay awake until dark.

We were fortunate that the hotel had our room ready when we got there so were able to settle in and change clothes before venturing forth.

The map showed our hotel was an easy seven-minute walk from Monastiraki Square, the center of a lot of the tourist activity in Athens. It sits right at the base of the acropolis, with those ancient architectural wonders looming over the area. It’s also where you can catch the hop-on, hop-off busses. We planned to get right on one, but we were seduced by the shopping opportunities and waylaid by hunger. We had lunch at one of the many, many places near the square that cater to the tourists. We both ordered Souvlaki. The waiter promised us the best Souvlaki we’d ever tasted. I can’t say I agree. It was decent but I’ve had at least as good at several Greek places in the U.S.

The shops targeting tourists are many but surprisingly unvaried. The usual assortment of shops for trinkets and small gifts for all your buddies are there, along with leather purses and billfolds, leather sandals, specialty foods, and clothes. Many of them seem to carry the same assortment of merchandise from the same vendors.

Then we got the hop-on, hop-off bus tour, which took us around to all the major sites. Being mostly zombified from travel, we stayed on the whole time and enjoyed getting the big picture.

Even from a distance, seen from several angles including from the rooftop lounge of our hotel, the acropolis is spectacular. We’ve booked a guided tour for Thursday and I’m eagerly awaiting it.

Tomorrow we plan to do a bit of wandering around the town, some more shopping in the morning, then get to the Archaeological Museum in the afternoon. The place is vast, and almost certainly more than we can take in in one afternoon, but it seems like good preparation for viewing the acropolis.

We’re pretty beat by this time, so we had a light dinner (pizza) in the bar/lounge upstairs along with a drink and now we’re falling asleep trying to get our notes made. It isn’t even dark yet, but I doubt I can hold out much longer.

Random Observation 1: It’s not hard to see why the Greeks built temples to their gods on the hill of the acropolis. It literally looms over the city.

Random Observation 2: The Greeks still love smoking. An amazing number of people do it.

Random Observation 3: Athens is a huge, sprawling city in a setting this is closer to being a desert than I expected. 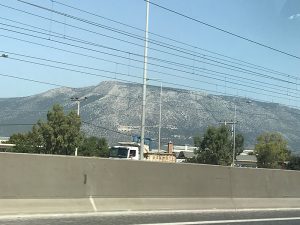 The drive into Athens. Liz and I were both struck by how much of a desert it appeared to be than we expected. 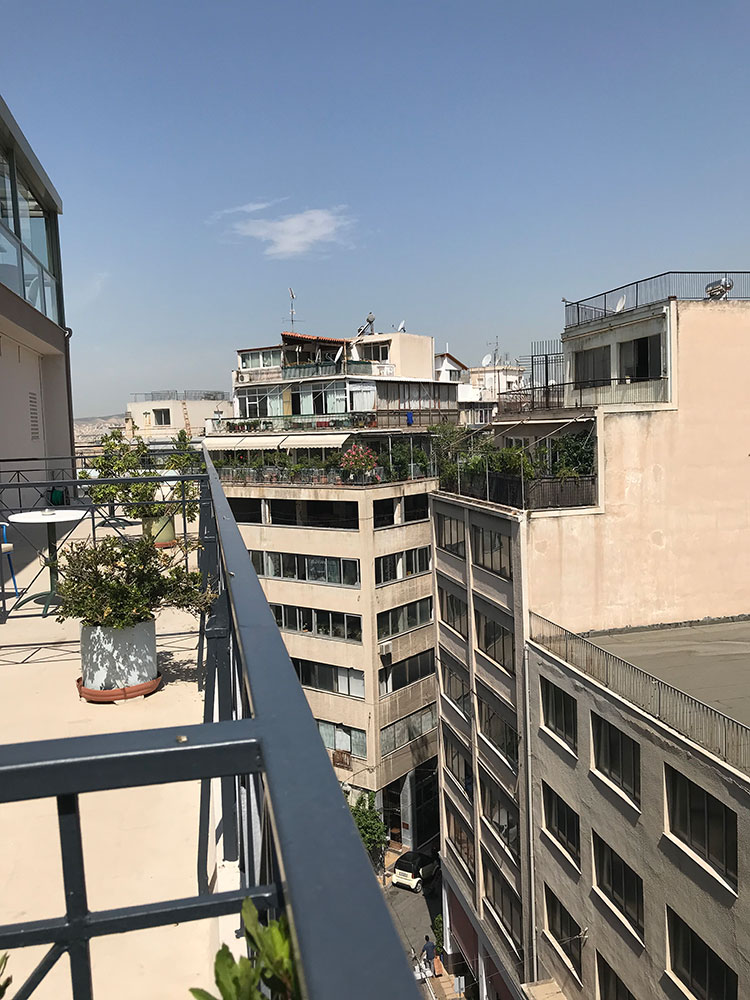 The view from the balcony of our hotel room. 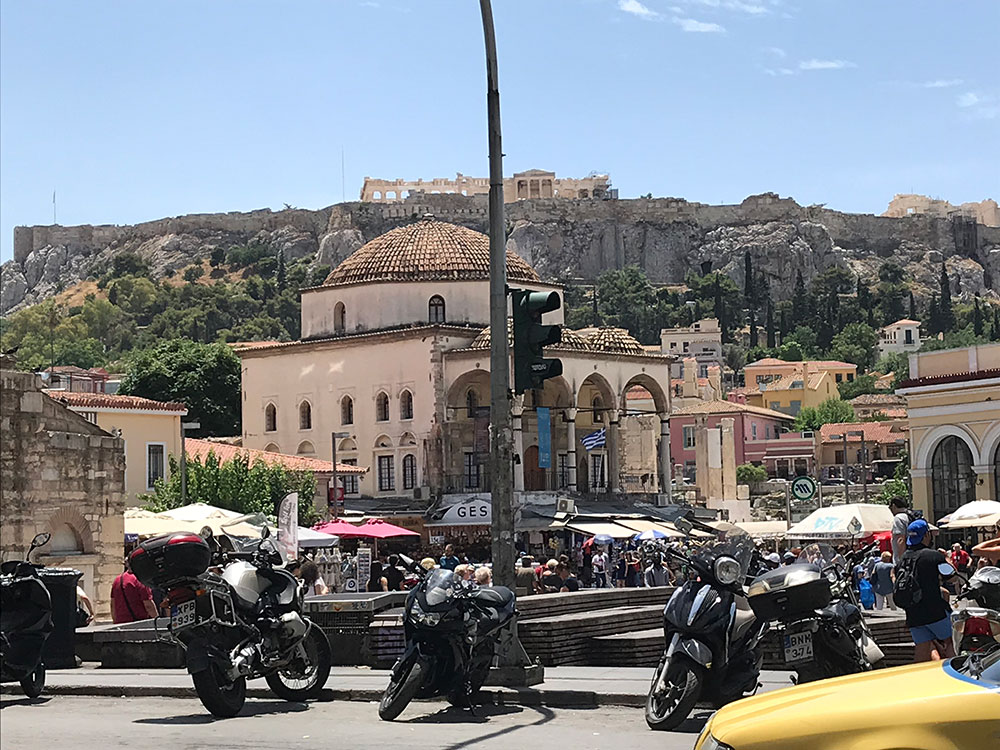 Monastiraki Square with the Acropolis looming over it. 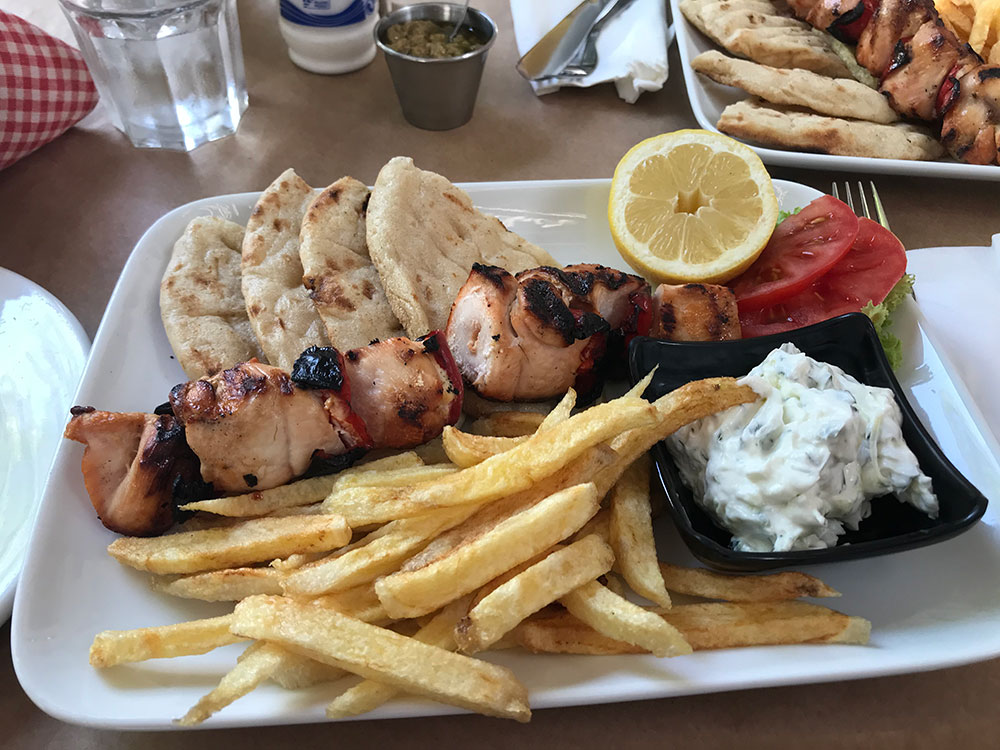 Our waiter promised us this would be the best Souvlaki we’d ever tasted. It wasn’t. 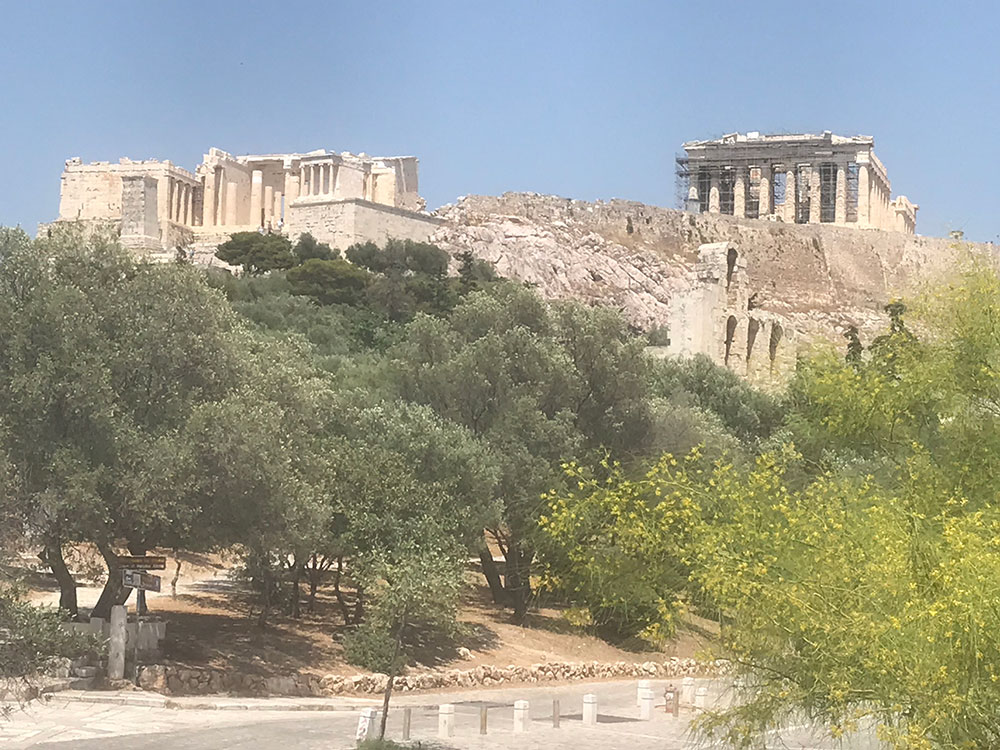 View of the Acropolis from the Hop-on Hop-off bus. 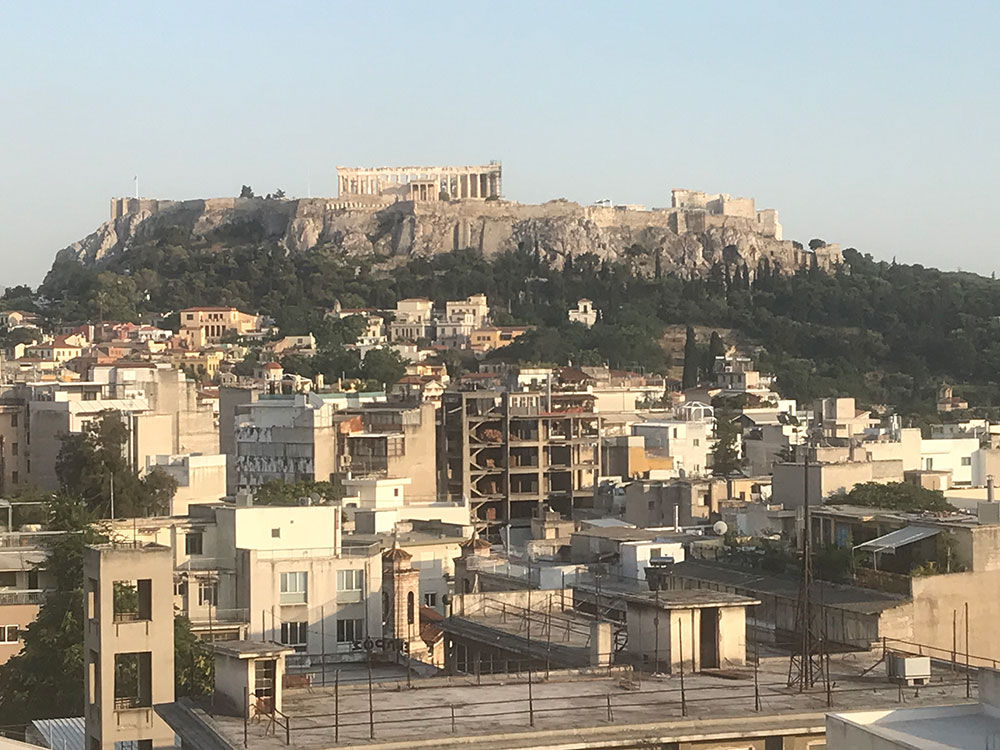 View of the Acropolis from the rooftop lounge of our hotel.

One Response to A Visit to Greece Day 1 in Athens