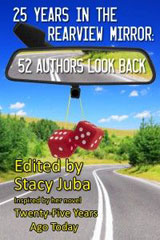 Donna Crow, one of my fellow authors from the brand new e-book 25 Years in the Rearview Mirror, 52 Authors Look Back,and I are doing a blog exchange, so after reading her post here, you can check out mind on her blog.

If you enjoy magazine columns and Chicken Soup for the Soul books, then we’re sure to enjoy our collection of essays, designed to warm your heart, raise your spirits and compel you to examine your own life. Read about school days, quirky jobs, romance, raising a family, hard times, the writing journey, and find out what makes your favorite characters tick.

Get a full listing of authors, essay titles and retailers here: http://ning.it/OknwVR

And now, to Donna who is going to tell us about “GLASTONBURY, The Story of My Life.” 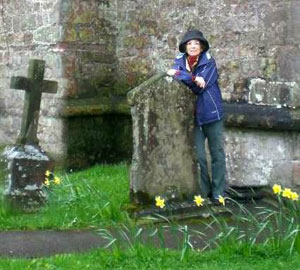 Donna Fletcher Crow amidst the tombsones in Wales

Thank you so much for hosting me on your blog today, Karen. How interesting that you did an undergrad thesis on The Holy Grail! So I guess you can understand that it’s held a lifelong  fascination for me. I really don’t think it’s too much of an exaggeration, that GLASTONBURY, A Novel of The Holy Grail, is the book I was born to write.

Just as the search for the Holy Grail is the centerpiece of this 820-page novel covering 1500 years of English history, so the stories of King Arthur have been a centering passion for my life. I wrote my first short story when I was about ten years old: Sir Lancelot killed the dragon and rescued the maiden from the tower. For me that was simply the only story there was to tell.

As an English major in college I loved “Sir Gawain and the Green Knight,” “Idyls of the King” and all the others in the repertoire. As a mother I saw to it that my three sons had castles to play with and knights costumes to dress up in (along with Batman, Superman and Flash Gordon, of course). And when they grew up I was several times asked by their English teachers to talk to their classes when they were studying the Arthurian legends.

The thing that really brought it all to life for me, though, was a research trip I made to the west country of England in the early 1980’s. My editor at that time accompanied me on the trip because we were both working on books set in Monmouth in Wales. Of course I couldn’t be that close to Glastonbury without making pilgrimage to the Holy Isle of Avalon. 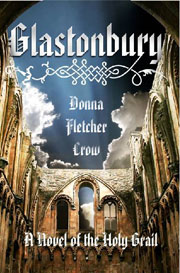 After our all-too-short two day stay, we were leaving town when Carole began reading aloud from a little blue pamphlet she had picked up at a bookstall: “‘Did our Lord ever come to Glastonbury as a lad? The story lingers not only here, but elsewhere as well. Briefly, the tradition is that the young Jesus, entrusted to the care of his Uncle Joseph of Arimathea by his mother Mary, daughter of Joseph’s elder brother, accompanied Joseph on one of his expeditions to Britain to seek metals for his flourishing trading company.’”

I gave a shout of laughter. “What? That’s crazy!”

But Carole kept on. “No, wait, this is interesting. It says, ‘Perhaps there is some truth in the tradition which still lingers in Somerset that St. Joseph of Arimathea came to Britain first as a metal merchant seeking tin from the Scilly Isles and Cornwall, and lead, copper, and other metals from the hills of Somerset, and that his nephew came with him as a boy. The tradition is so startling that the first impulse is to reject it summarily as ridiculous.’”

“It sure is,” I said, but Carole continued reading.

“‘Amongst the old tin-workers, who always observed a certain mystery in their rites, there was regularly a moment when they interrupted their work to sing a quaint song beginning, “Joseph was in the tin trade.”

“‘If this is so, it is quite natural to believe that after the crucifixion, when the church was dispersing under persecution, Joseph and his party would come to this land with which Joseph was already acquainted.

“‘Among the cherished possessions the little band brought with them was the cup used at the Last Supper in Joseph of Arimathea’s Jerusalem residence, an ordinary cup in everyday use in his house, now become a sacred treasure, since with this cup of olivewood our Lord had inaugurated the new covenant.’”

Now my imagination soared and I wasn’t laughing at all.

In 1987 I had proposed to write the Glastonbury Series— six novels covering Celtic, Roman, Arthurian, Anglo-Saxon, Norman and Tudor England. After I sent off the proposal I read Edward Rutherfurd’s SARUM and realized how well my proposed series would fit a similar format as a single epic novel.

When the editor who later became my publisher called me early on the morning of the Fourth of July (writers and editors seldom vacation) I said, “Wait, I’ve had a better idea.” He had just read SARUM as well and wanted to publish a novel like that.

In 1992 the first edition of GLASTONBURY was published by Crossway Books with its cover showing the broken arches of Glastonbury Abbey through a bower of leafy green. And then in 2000 GLASTONBURY was brought back in a fully reedited edition with a beautiful black cover bordered with Celtic knotwork.

And now, after 20 years in print, GLASTONBURY, The Novel of the Holy Grail, has a whole new life with yet another stunning cover in a version fully reedited for ebooks. http://ning.it/NZ66gO

And so the saga continues. My new publisher uses the strapline: The Holy Grail lies somewhere in Glastonbury!

Donna Fletcher Crow is the author of 40 books, mostly novels dealing with British history.  The award-winning Glastonbury, A Novel of the Holy Grail, an Arthurian grail search epic covering 15 centuries of English history, is her best-known work.  She is also the author of The Monastery Murders: A Very Private Grave  and A Darkly Hidden Truth, as well as the Lord Danvers series of Victorian true-crime novels and the romantic suspense series The Elizabeth & Richard Mysteries. Donna and her husband live in Boise, Idaho.  They have 4 adult children and 11 grandchildren. She is an enthusiastic gardener.

To read more about all of Donna’s books and see pictures from her garden and research trips go to:  http://www.donnafletchercrow.com/

4 Responses to Glastonbury – A Guest Post by Donna Fletcher Crow