Posted on December 12, 2020 by Karen McCullough

(This story is best read from the beginning. Go here to read part one and then part two if you haven’t already)

After the busy day the boys had, there were a couple more payoffs. 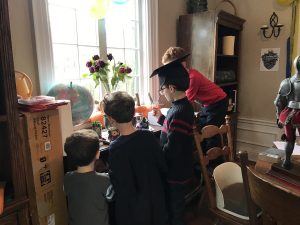 Not long after Quidditch practice, as the boys were taking off jackets and outdoor shoes, the five-year-old noticed that the magic seeds had sprouted into a bunch of adorable succulent plants while they weren’t looking. I wish I’d had my phone ready at the time because his expression on seeing the plants was a priceless combination of wonder and amazement. He pointed at them and could barely manage to get out the word, “Look.” The astonishment and excitement spread to his brothers.*

Having finished their lessons for the day, the boys got another treat: they watched the movie, The Princess Bride for the first time. Although the younger ones found some of the scary scenes hard to take, the nine-year-old and (to some extent the seven-year-old) were deeply engrossed in it. Later the same day one of the boys was heard to threaten another with the line, “You could end up ‘unemployed in Greenland’!” I believe there were also mentions of not being left-handed. Their Mom says they’ve asked to watch it several more times and even though she loves the movie, too, she’s starting to feel like it’s too much of a good thing. 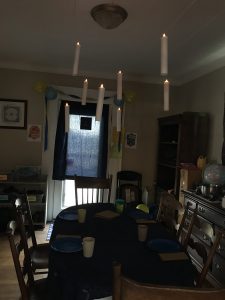 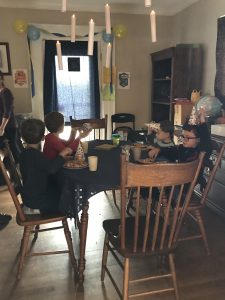 The day concluded with a festive birthday dinner in a Hogwarts-decorated dining room. They boys had their favorite meal: pizza, in a magically lit dining room. We had strung “floating” candles from the ceiling with fishing line. The candles were miniature LED candles encased in rolled up cardboard tubes. It actually worked well and was very effective. 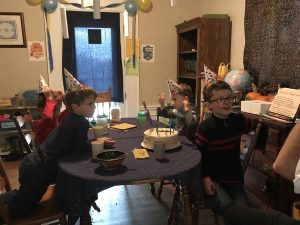 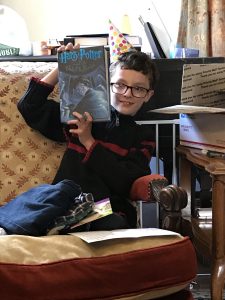 Finally there was cake and presents. And one of the nine-year-old’s dearest birthday wishes came true. He got volume five of the Harry Potter series, Harry Potter and the Order of the Phoenix. He’s a voracious reader and would gobble it up over the next couple of days.

*Their mother and I bought a set of small succulent plants at a garden shop and planted them in the pots while the boys were outside for Quidditch practice. We didn’t say anything about it, just waited for one of them to notice the change.

This entry was posted in Family. Bookmark the permalink.