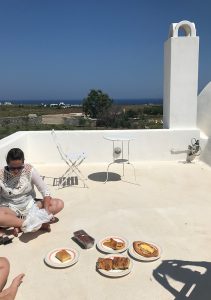 Breakfast picnic on the rooftop

After a late night, we all slept late the next morning. Since we had no food in the AirBnB, a couple of people went out to a nearby bakery to bring back breakfast. They returned with a variety of pastries and drinks. We had a mid-morning picnic on the roof where we each sampled the various offerings. They were all good, but the winner by acclaim was a delicious milk and honey cake.

At one o’clock we were picked up by a van that would take us to the dock to catch the catamaran dinner cruise. Collecting the rest of the passengers took us all around the island. But we ended up at the dock, where we boarded the boat and set sail.

The day was very windy, which would come into play later in the trip, but the first couple of hours of the trip we stayed in sheltered waters. The views of the coast were extraordinary. Gigantic, awe-inspiring rock formations dipped down into the sea, with caves and niches in the rocks. We stopped just off-shore of the red-sand beach in a small cove. The sand was all formed from the erosion of a cliff full of iron-rich rock that loomed behind it.

Our captain guide told us the red beach was technically closed due to rock falls. One prominent large rock at the base had fall just a few days before and he pointed out a large crack running vertically down the cliff that would eventually split off. Nonetheless, a group of people were on the beach, which meant they had walked down a long, steep path to brave the possibility of avalanche. We were anchored well off the coast for a swim. (Confession: I didn’t swim. Just wasn’t up to it at that point.) 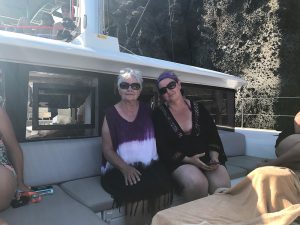 Liz and I on the boat

A second swimming area was off a white beach, where those who wanted to try snorkeling were given the option. Then they fed us a wonderful dinner, with grilled chicken or pork, salad, dolmades, pasta, and a great shrimp in tomato sauce.

A little while after that we were warned that we were leaving the sheltered waters and would hit rougher surf. And it did get rough with roller coaster type ups and downs. I got queasy. The crew gave me something medicinal in the form of a chewing gum. It did help settle my stomach but it also made me very sleepy and I ended up napping through the next hour so I missed the hot springs.

(The surf was so bad that the next day the boats weren’t allowed to go out at all.)

I woke in time to watch another fabulous Santorini sunset from the boat, positioned beautifully to frame the setting sun between a couple of rocky islands. We docked shortly after that and the van took us back to the AirBnB. The others went to dinner but I was too exhausted to be interest in eating, so I went to bed.

Random Observations:
– I think I need to swear off cruises that involve any ocean sailing. I seem to attract bad weather. I don’t have a lot of trouble with motion sickness in general, but rough waves do make me seasick.
– The crew of this Sunset-Oia boat was amazingly patient, kind, helpful, and informative. It was a fantastic way to see the island, along with great food, swimming, and snorkeling. Even with the queasiness, I’d do it again, but I’d hope for better weather. 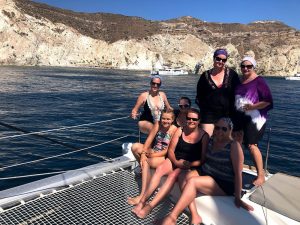 The whole group on the boat 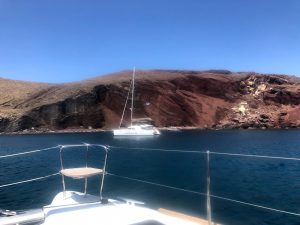 The red beach; you can see a rock fall on the right. 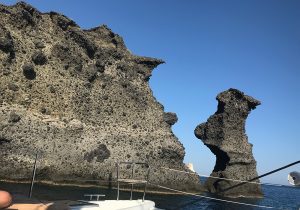 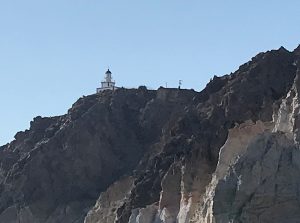 The lighthouse at Akrotiri 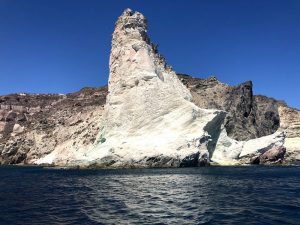 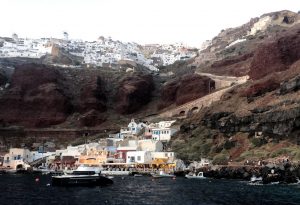 Oia from off shore. The place we had dinner the night before is on the right-hand side of the shore. You can see part of the stairs we came down zig-zagging down the cliff. 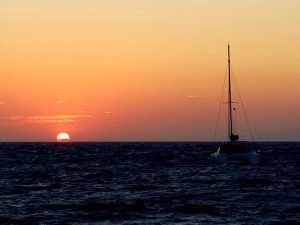 Another fabulous sunset from the boat.

This entry was posted in Travel and tagged Cruise, Greece, Santorini. Bookmark the permalink.