Greece Day 4, Athens and the Acropolis 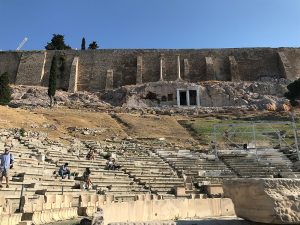 Today was our last full day in Athens and we began it with a walking tour of the Acropolis. Our guide was very knowledgeable and informative. It was already getting warm and the path is uphill for quite a distance, but she made the journey painless by stopping us in the shade at several points to talk about the various shrines and other buildings around the area.

An ancient, classical amphitheater is in the restoration process, but a second theater designed for lighter entertainment was restored to usefulness years ago and has been the scene of rock concerts, opera performances, and other shows for the last few years.

There are shrines to all sorts of minor deities scattered along the sides of the path up the hill of the Acropolis, before you finally enter through the grand Propylaia just as those long ago people going to the temples at the top would have entered, via a long, steep staircase. It was hugely crowded the day we went, which had the odd virtue of keep the pace upward fairly slow but steady. (Helped along by people stationed along the way whose only job, apparently, is to blow whistles and yell “Keep Moving” at all the folks who want to stop and take pictures.) 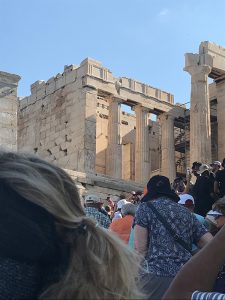 At the top our tour guide, showed us around the various temples, told her stories about various gods and goddesses, and then turned us loose to wander around the flat hilltop for as long as we liked.

Although everyone is familiar with the Parthenon, there are a number of other lovely buildings up there that are worth more than a glance. The Erectheion (a temple dedicated to both Athena and Poseidon) is a beautiful building; the porch of the Cyclades is lovely; and there’s a small, fully restored temple to Athena Nike.

But the masterpiece, of course, is the Parthenon, one of the most beautiful man-made structures in the world. Its immense size, astonishing proportions, and lavish decoration mean that pictures just can’t entirely do it justice. It’s one of those things that can only be experienced fully through an in-person visit. Here you feel the weight and depth of a history that stretches back to the dawn of civilization, and a sophistication that rivals anything being built today.

I hadn’t fully realized that most of the ravages of the spectacular temple have not been due to weather or earthquakes, but to human activity. The Persians over-ran it and and ravaged parts; when Greece was officially ‘converted’ to Christianity, much of the ‘pagan’ decorations were removed; but perhaps worst of all was during Greece’s rebellion from the Ottoman Empire, a massive explosion within the building destroyed a significant part of it. Then in the 19th century, Lord Elgin stripped much of the marble decoration from what remained and shipped it back to England. 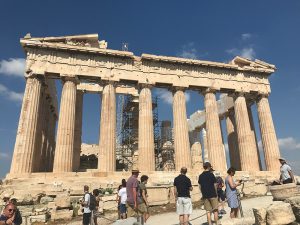 Today an enormous restoration effort is underway, scheduled to be finished, according to our guide, by 2056. She was dubious about that completion date being feasible. Much of the structure is wrapped in scaffolding, though there are parts where some restoration has been completed. All around the structure are heaps of marble parts – bits of columns and friezes, some new marble panels to replace those irretrievably lost and a number of Ionic capitals, numbered and ready to be put in place some day. They’re a grim to testimony to the extent of the job underway.

It was hot and crowded at the top so we didn’t linger as long as we might have under better conditions. After making our way back down, we stopped for coffee and gelato, then had lunch. (Yes, backwards, but we’re on vacation!)

After lunch we went to the Acropolis Museum, where much of the extensive statuary that once decorated the top of the hill is now housed. Mind-bending and impressive. They didn’t allow photography, though, so I have no pictures to share from it. You can see some of the collection on their website at https://www.theacropolismuseum.gr/en 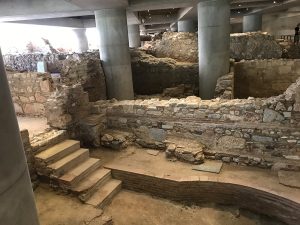 They did allow cameras in the extensive Athenian village excavation that lies below the museum. They’ve dug out several layers of succeeding time periods of homes. It was fascinating.

From there we took the Metro to Monastiraki Square (near our hotel) and paid a visit to the Poet/Sandal-maker. He had beautiful sandals that they would fit to your feet right there, but I realized the style wasn’t going to work for me. I really want more cushioning in my shoes, but a couple of our party did get them and they do look wonderful.  From there we came back to the hotel to print boarding passes for our flight to Santorini tomorrow. Liz and I decided to call it a night at that point since we had to get up early tomorrow for the flight. 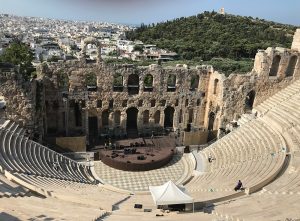 The Odeon (musical theater), which has been restored and is used for concerts 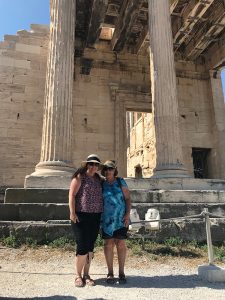 Liz and I in front of the Erectheion, a temple dedicated to Athena and Poseidon 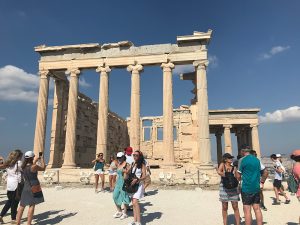 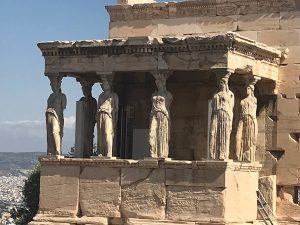 The Porch of the Cyclades is on the other side of the Erectheion. (The statues are replicas; the real ones are in the Acropolis Museum.) 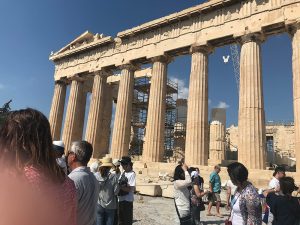 The Parthenon (Photos will never do it justice.) 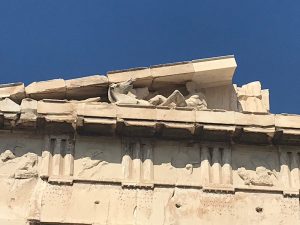 Detail of part of the pediment 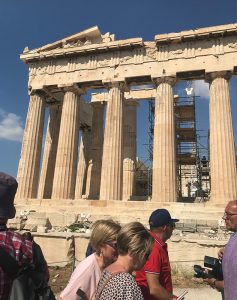 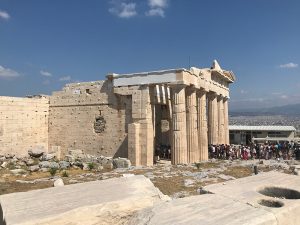 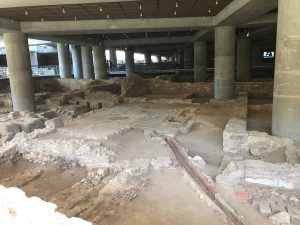 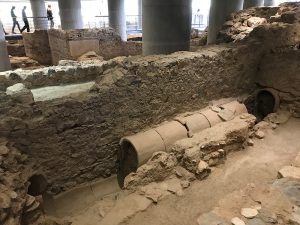 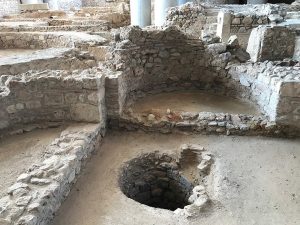 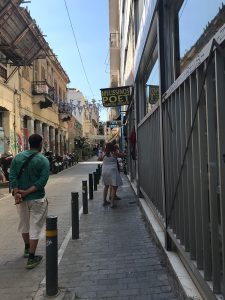 This entry was posted in Travel and tagged Acropolis, Acropolis Museum, Greece, Parthenon. Bookmark the permalink.