Posted on September 2, 2015 by Karen McCullough 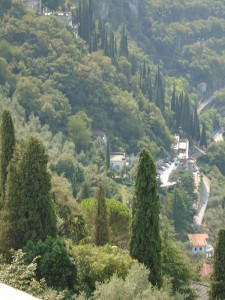 Our hotel in Varenna, the Albergo Eremo Gaudio. The upper part is near the top of the picture, the lower part at the bottom.

We reluctantly bid goodbye to Florence, walked to the train station, and got the train to Milan. There we transferred to the train to Varenna, a small, charming town that sits on the eastern side of Lake Como, right at the place where the inverted Y shape of the lake splits into two legs. The trip was easy, other than a bit of rush to get from one train to the other in the huge and crowded station. I love the European high speed trains!

As everywhere we went in Italy, Varenna was full of tourists. However, the town is so small the tourists don’t overwhelm the place as in Florence and Rome. Our hotel, Albergo Eremo Gaudio, was a remarkable place. It is a former hermitage on the side of a steep hill. We were on the lowest level, which makes sense with the baby, but we did later take the two funiculars and the lift to the upper level rooftop terrace, which was way above our rooms! 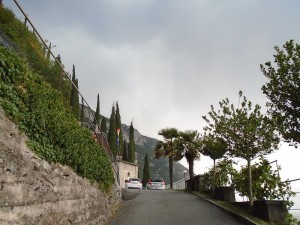 Even the lower part of the hotel required a steep climb.

Walked into the town and a pretty serious thunderstorm, which we took as a sign that we were supposed to duck into a covered outdoor bar and snack place. We had drinks and snacks while waiting for the storm to pass, and happened into a tiny (6 tables), but spectacularly good little place called Borgovino. Had some of the best food I’ve ever tasted. We decided we’d have to go back there at least once before we left, so we made reservations there for our last day in Varenna. 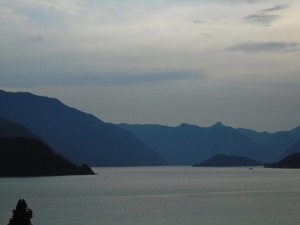 The view from our hotel room across Lake Como 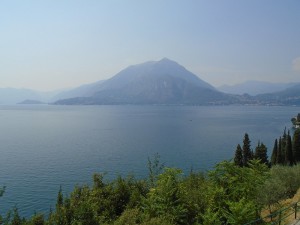 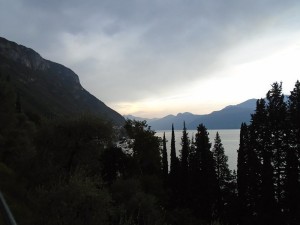 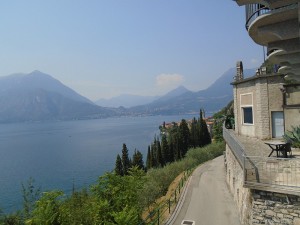 This entry was posted in Italy and tagged Lake Como, Vacation, Varenna. Bookmark the permalink.