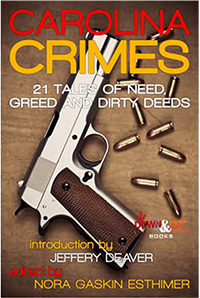 Coming July 31 from Down and Out Books is a new anthology from the Triangle Sisters in Crime chapter titled, Carolina Crimes: 21 Tales of Need, Greed and Dirty Deeds.  I’m excited to announce that I have a story in this anthology.

“Dead Man’s Hand” isn’t exactly the story I set out to write when I heard about this anthology. But through multiple rounds of editing it morphed from a bit of a disorganized tale of family dysfunction into a story about how well one spouse knows their partner and the way little things can reveal truths covered up bigger things.

When Caroline’s husband is found dead in his home, all the evidence points to suicide. But Caroline knows it wasn’t. It’s not that she doesn’t believe he would kill himself, but she is quite sure that if he had, he would’ve left her a long list of instructions about what to do. That was George’s way.

Because he obviously knew his killer, there are only a few possibilities, and Caroline is determined to learn who did it.

Caroline ‘s hand shook as she stuck the key in the door of her home. She hadn’t been inside since that hideous night a week ago, when she’d found her husband’s body on the floor of his office. The police had kept her out while they investigated his death.

Emptiness echoed through the place as she walked in, the silence louder than her footsteps on the hardwood floor of the hall.

She stopped for a moment in the kitchen. She’d have to clean out the refrigerator, replace all the staples, sort through the accumulated mail, do laundry. The white board over the desk caught her eye. It bore a note from George reminding her to pick up his gray suit from the dry cleaner. He must’ve written that between the time she’d left to go shopping and his death a few hours later. A tidal wave of grief washed over her, blotting out everything else. What was the point of doing anything with George gone? She dropped into a chair and cried, letting the tears flow in a way she hadn’t been able to while staying with her sister-in-law.

When the spasm wore out, she blew her nose, and sat up straight.. Before anything else, she needed to face the hardest test, to go back into George’s office.

She steeled herself and opened the door. The strange aroma that she’d smelled in her dreams since that night lingered—gunpowder, blood, excrement—and there was something new, a chemical tang. Nausea surged through her. She covered her mouth and made herself survey the dark stains on floor and wall.

When she’d had all she could take, she backed out quickly. Everything else could wait until the cleaners who specialized in crime scenes had done their job. She retreated to the living room and sank into the couch. George had handled all the financial things, not just because he didn’t want to talk about the cost of his gambling, but because he was also a control freak and it made him nervous to leave it to anyone else. Before his death, she’d lived with the stress of his gambling addiction. When he locked himself in the office for hours, when he refused to discuss their finances, she’d tried to convince herself it was all right. He gave her a generous allowance and the credit cards were never refused; no bill collectors ever called. Now, not only did she have to grieve for the man she still loved, she had to come to grips with how he died.

This entry was posted in Mysteries, Uncategorized and tagged Anthology, Carolina Crimes, Sisters in Crime. Bookmark the permalink.