A Vampire at Christmas

Posted on December 21, 2013 by Karen McCullough 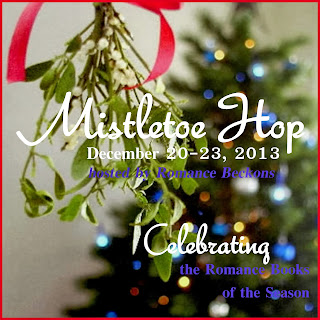 Christmas Trees. Holiday Music. Sugar Cookies. Glitter and Bows. And Best Of All… the Mistletoe. Romance books enhance our holiday traditions. Who doesn’t love to cuddle under a warm blanket near a fire place on a cold day and read? Hop around with us to celebrate the best romance books of the season.

Read excerpts from some good books. Enter each of the author contests. Tell us what you like to read during the holidays. Find some new-to-you authors to ring in the New Year with. 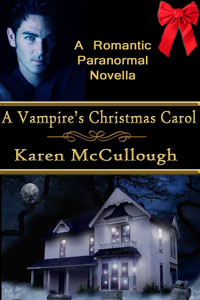 My Book: A Vampire’s Christmas Carol

Blurb: Can Christmas Eve get any more fun? On her way to her family’s home, Carol Prescott’s car slides into a ditch in a deserted area with no cell phone signal. The only available shelter is already occupied…by a vampire. To Michael Carpenter, Carol is the bait of a trap.

You can read an excerpt here, but you might find this fun too. It’s a little effort I did a couple of years ago.  Each year I bring it out and try to refine it, add to it, improve it:

‘Twas the night before Christmas and all through hall
The vampire prepared for his last night of all.
A hundred years gone and the urge to drink blood
He’d struggled against and so far withstood.
With dawn’s early light, his cursed life would end
His soul, however, he’d maintain and defend.
When out on the porch there arose such a clatter
He trudged to the door to see what was the matter
When what to his wondering eyes should appear
But a young woman shivering with cold and fear.
Her face it was pretty, her blood warm and sweet
To him, she was temptation, from her head to her feet.
Forced off the highway and lost on a back road,
With her car in a ditch, she’s alone alone in the cold
Ignoring his warning that his presence meant danger
Carol opted for shelter and passed time with the stranger.
Memories of Christmases long gone they traded
Gifts and feasts and treasures long faded,
And of the terrible night, a century ago,
When a vampire stole his life and his hope.
As he suffered the death throes of blood-hunger pollution,
She struggled to help him and find a solution.
When an enemy dastard showed up to gloat
He tries to make Carol a sacrificial goat.
She’s no willing victim and fights for her life
And to help Michael get through a long night of strife.

Okay, it’s not done, but I continue to work on it.  And I don’t want to give away the ending, but I want to suggest there might be a solution to their problem, though it’s rather ridiculously hard and dangerous.

One lucky commenter will win two ebooks of your choice from all of my books that are available as in ebook format.

And… BONUS!  Anyone can suggest a couple more lines that are in the right scan and rhyming pattern that I decide to use in the poem will win an extra prize!

Below is a list of other participants in the hop, with more chances to win prizes!

5 Responses to A Vampire at Christmas